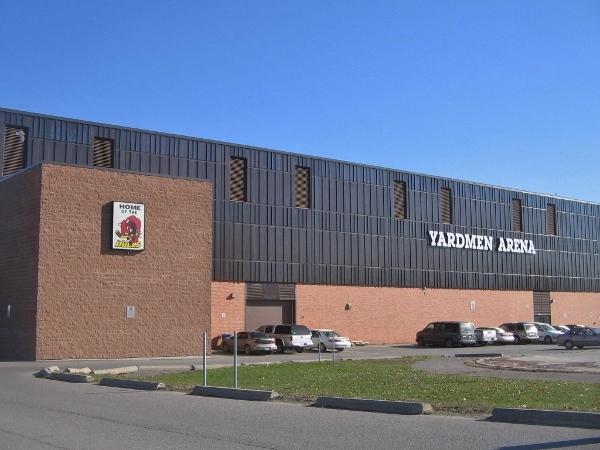 After taking in an afternoon CIS game an hour down the road at the Royal Military College I headed west on Highway 401 to the small city of Belleville.  I was excited to finally see a regular season OHL game!  (I had previously seen the Erie Otters play a preseason game in Jamestown, NY)  The Yardmen Arena sits almost within sight of the 401, and is an impressive facility. This arena opened in 1978, and has hosted the Bulls since 1981.  The large structure has a squarish, warehouse type look to it, with brick along the bottom of the building, a flat roof line, and black metal siding across the upper half of the exterior.  I purchased my ticket at the ticket office in the main lobby a couple hours before game time, and was impressed with both the look of the facility as well as the building itself.  The arena also has a second ice pad in the other side of the building, on the other side of the entryway which sits between the two.  There is a small souvenir shop right next to the ticket office, but it seems well stocked and big enough.  Admission to tonight's game vs the Guelph Storm was $15, and it seems as though all seats are the same price.  There is ample free parking behind the building, although with only a couple exits from the parking lot to the main road traffic jammed up a bit getting out.  In order to enter the building you need to go up a flight of stairs, where you are met by ticket takers at the end of a hallway.  On this night there was some sort of rummage sale going on in the hallway in the upper level just before you enter, and they were selling everything from blankets to welding helmets.  This building really seems to act as a community center in addition to housing the Bulls.

Once inside there is a table directly in front of the entryway which sells programs, 50/50 tickets and other goods.  You must then walk left or right to get to your seats,  as the concourse runs around the top of the seating area, except for a balcony on each side.  There are little to no seats on the ends, and tall steep grandstands running the length of the sides.  The chairs are green plastic, but comfortable enough.  The far end away from the main entrance has one row of seats along the concourse, but all of the holders of those seats stood up for the whole game.  The near side where you enter the building has a few luxury suites running along the top, and a couple rows of seats at ice level.  The food concessions are also located on the ends, although unlike newer arenas you cannot see the ice from the concession lines.  Wash rooms are old, but sufficient.  There is also a nice video scoreboard above center ice, although it adds little to the game experience as they just play commercials and promotional videos, etc.  The ice itself may the the biggest thing that sets this rink apart from most as it is Olympic size.  I am not a big fan of the big ice as it was evident in this game that there was little hitting, and not a lot of physical play..  It almost seemed as if the whole game was played 4 on 4 with all the open ice.  The small capacity of only a little over 3000 keeps the atmosphere fun, although there were quite a few empty seats on this night.  I'll take a 3000 seat barn over an 8000 seat barn any day.  This place really seems to have a lot of atmosphere.

This was a good hockey crowd, although they were somewhat subdued.  I was amazed by the older nature of the crowd as there were as many people in their 70s as there were people in their 20s.  It is clear that the Bulls tradition goes way back.  the game itself was tightly contested, with the Bulls winning 3-1, but only after scoring an empty netter in the last few seconds, otherwise the game was close the entire time.   There was also one 1 fight in the game, and it happened in the corner I was sitting in, so that quenched my appetite for the rough stuff.  I thought the fan contest of a father/son tricycle race at intermission was entertaining.  The presentation is professional, yet maintains a small town feel.  Overall it was very enjoyable to watch a game at Yardmen arena, and the small town hockey crowd left me with a good vibe for the evening.  It was also neat seeing a team and facility with tradition such as the Bulls.  Although one of the smaller markets in the OHL the Bulls have a tradition which is lasting, and the city is a great fit for the league.

**Note - Some of the photos in the review and photo gallery were taken on a return visit to Yardmen Arena on September 23, 2010

Other information about the Belleville Bulls is available at:  Bulls Home

Other information about Yardmen Arena is available at:  Arena Home