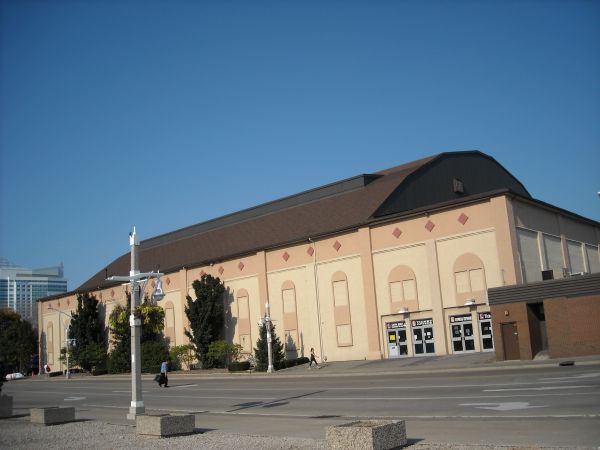 Modern.  Cutting-edge.  State of the art.  All of these adjectives describe some the the arenas of the OHL.  None of these adjectives can be used to describe Windsor Arena however.  For an arena buff like myself some places are just must-see destinations.  Windsor Arena is definitely one of those places, and the fact that the Spitfires are set to call a new arena home in a few short months made a trip to Windsor Arena imperative before it is too late.   Located in a somewhat run-down neighborhood of Windsor, only a block and a half from the Windsor Casino, and within sight of nearby Detroit,  this old arena is affectionately known as "The Barn".   Built in 1924, this place is currently the oldest arena in use for Canadian Major Junior Hockey,  and although the OHL has probably outgrown its tight confines this place is still a treat to experience a game at.

I arrived early as tonight's game was not only the final OHL season opener for this historic building, but it was also Mickey Renaud Night, where the Spits captain who tragically died as a result of a heart condition last season would have his number retired.  Needless to say this would be a game with a greater meaning than your average OHL regular season game.  Fans, including myself, milled around the arena for quite some time before the doors opened, and there was a block party of sorts going on in the adjacent lot with food, games, and a live radio broadcast.  I picked up my previously ordered ticket in the tiny lobby/box office area and waited for the doors to open.  One of the 2 Zambonis was parked outside the building as it appears there is only room for 1 inside the building when the arena is in use. Once inside you are amazed by the narrow hallway which serves as the concourse and runs all the way around the building underneath the seating area.  I was probably one of the first 500 people to enter the building and I thought the concourse was crowded then.  To say it gets  crowded between periods is a complete understatement.  Once inside the front door there is a tiny souvenir booth, which unfortunately was out of "Salute to the Barn"  T shirts in my size, although it was good to see the team honoring the tradition of the building with merchandise.  My ticket for the game cost $18 as did all seats. Concessions were basic and cheap, and the hotdogs were good.  A step into the arena itself is like a step back in time.  Although the lower seats on the sides are the modern plastic type there does not appear to be too much else that is not from a bye-gone era.  My seats were on the end of the rink, in section 7 where the seating is only 3 rows high and is made of of wooden benches built in a slab-like fashion.  The vantage point from this area was cool as my feet were basically on top of the glass directly behind the goalie.  A neat spot to watch a game for sure, although my front row seat in the section did mean I had to look through a metal screen.  Still being that close to the ice at such a strange angle was unique.  The high arching roof only magnifies the old time feel of this place.  This place is old school for sure as there are no video boards, and the music during stoppages includes organ music, although it is likely recorded.

The views from the rest of the seats also seem good, although they really pack the people in.  The last few rows of the sections of the sides are also made up of the wooden  slab type benches.  The press box looks like something right out of the movie Slapshot as it hangs high above the side with the penalty boxes, and only fits about 3 people.  The PA system was rather muffled, but sufficient, and a center ice score clock lists the penalty time, but not the player number of the guilty parties.  The thing I liked the most about this place was how non-corporate the place felt.  Sure the team and arena have sponsors, but you were not bombarded with  an ad for some product or business every time there was a stoppage in play.  The hockey game was the main attraction here, and that is as it should be.  After a heartwarming jersey retirement ceremony for Mickey Renaud, including statements from his Dad, former coaches, and scouts the place really came to life.   The Barn is listed as holding 4400 people, and honestly people were shoe-horned into the building, even standing 3 deep at the glass below my section.  The crowd was dedicated, knowledgeable, and rowdy when needed.  The atmosphere is not something you would ever find at one of the newer cookie-cutter 6000 seat arenas, regardless of how exciting the game is.  The fans in  Windsor are there to cheer for the Spits, and have a good time, and this blue-collar crowd surely does both.  Play had to be stopped twice for errant beach balls which ended up on the ice.   From a fan standpoint the game had it all- a bunch of shots, a 5-0 win for the Spits, and a couple fights including a mini line brawl.  The fans enjoyed the action despite blistering heat inside the building as the 80 degree day and people packed uncomfortabley into the arena made for as warm an environment as you will ever find inside a hockey arena.  I was sitting only about 10 feet from the ice surface and was warm with only a t shirt on.  In the third period I even thought the game would be suspended due to the fog which formed on the ice as I could barely see the goalie on the other end of the rink.  The refs would stop the play every 3 minutes or so in the third period and have both teams come off the benches and skate in circles for a minute or 2 until the fog died down enough to drop the puck again.  If you are looking for a comfortable arena with a modern look where you can stroll a virtual food court on the concourse and sit in a climate controlled luxury box and follow the game on the video scoreboard-then you should skip a trip to Windsor.  If you want to experience hockey the way it was viewed in the 70s then make a stop and "The Barn"  before December as that is all the chance you have to take in a game at this amazing place. Other information about the Windsor Spitfires is available at: Spitfires home

Other information about Windsor Arena is available at:  Arena Home