The Windsor Spitfires have been one of the most iconic franchises in junior hockey since their founding in the 1970's.  When you think of the Spits you think of their vocal, outlandish, and gritty fans, and usually conjure up and image in your head of their former home, Windsor Arena.  That place was a cramped, run down, aging place for a number of years, but it was a mad house that exuded energy from its walls.  When the time came to move on to a new arena, a more suburban location on the east end of the city was chosen, and, after claiming a couple of Memorial Cups, the Spitfires moved into the WFCU Centre in 2008.  With naming rights owned by the Windsor Family Credit Union this arena is everything that the old barn was not.  It is modern, spacious, and has lots of creature comforts.  In this day and age that is what most hockey fans desire, although we will always have a soft spot in our heart for places such as Windsor Arena.  When approaching the WFCU Centre you can get a sense of its large size.  It stands off by itself surrounded by large parking lots, and has an enormous profile.  The shape is unmistakably one of an arena, and the large building features tan cinder blocks along the lower course of the exterior, a darker brown stucco along the middle of the building, and tan metal siding higher up.  A large courtyard sits in front of the main entrance, with a large sidewalk area and some landscaping.  The arena name is present in a number of places on the exterior walls, and the building has a simple yet clean look to it.  In addition to the main arena there are community ice pads and a fitness center attached.  There is a Spitfires team store in the lobby area of the community arena area, and upstairs is the Windsor-Essex Sports Hall of Fame, which pays tribute to local athletes who went on to bigger things, featuring photos of hall of fame inductees, and a nicely done mural in the stairway.  Fans of rough and tough hockey will be glad to know that Windsor area natives Bob Probert and Tie Domi each have recognition in the hall of fame area.  Windsor is known as a rugged blue collar town, and guys like Domi and Probert represent those values to a T.  This was a Sunday afternoon game with a 2pm start, and the parking lot began filling up an hour before game time as we secured a ticket for $22.  The WFCU Centre is a big-time arena, and is a stark contrast to Windsor Arena.  With that comes many of the modern trappings and somewhat sterile features of a new building, but this place has certainly become a place that feels like a home to the Spitfires, and the fans are still raucous and supportive, albeit in a much less hostile environment for opponents.  At a capacity of 6450, this venue will serve as a proper home for the team for decades to come.

Once through the gates on game day you find yourself on the wide concourse that runs underneath the seating bowl.  The concourse has high ceilings and a very modern look.  Parts of the concourse have windows that look out to the parking lot area.  The special promotion on this day was that the Stanley Cup was on site and fans lined up on the concourse throughout most of the game and pre-game time to get their photos taken with the greatest trophy in sports.  Concessions are scattered throughout the concourse, as are merchandise kiosks.  The arena does have some displays of history on the concourse, including a rather large tribute to Mickey Renaud, the former Spitfires captain who passed away during practice from a heart condition in early 2008.  The display features Mickey's photo, as well as his locker from Windsor Arena as it was on the day he passed away. The access road to the arena is also known as Mickey Renaud Way.  The WFCU Centre does a good job of preserving Spitfires history despite being less than 10 years old.  Once into the arena itself you find a large single seating bowl with wickedly steep seats at one end.  Seating is made up of maroon plastic seats, and there are suites above the seating area on both sides of the ice, and a club restaurant section on the end opposite the steep seats.  A flat tin ceiling and open duct work sit above the ice,  as does a nice but rather small video board.  The rafters have banners including the pair of Memorial Cup titles, and the arena feels like a mini-NHL venue. The number 18 is one the ice as well in tribute to Mickey Renaud.  The seating is steep so sight lines are excellent, and the nearly sold out crowd were all able to get a good view of the action.  There is really no standing room section here, as the seats extend up to the front of the luxury seats on the sides, and up to the end wall.  One drawback, which is more and more common with newly-built arenas is that the lighting at the top of the arena comes from the sides, making for a lot of glare .  The WFCU Centre is certainly a modern facility and is just the right size to hold an OHL team in a place like Windsor, which historically has supported the team well.  Sight lines are good, the place is comfortable, and the layout on par with most of the newer mid-sized venues being built today.

The gameday presentation conducted by the Spitfires staff at the WFCU Centre is polished, and full of promotions.  The players skate onto the ice through an inflatable plane, and entertainment is the focus throughout the game. These days that also means ads.  Lots of them.  There are ads played frequently on the video board, and tons of ads on the ice surface, like many minor league and other major junior venues there is a promotion for nearly every aspect of the game.  Despite the barrage of marketing presentations from sponsors the atmosphere is kept fun.  This being a Sunday afternoon game there were lots of kids on hand, and they would have a chance to skate with the Spits after the game as well.  Intermission features the usual contests as well as a bingo game where numbers are displayed on the video board for fans to fill in on the bingo card they were given by their usher.  The fans were vocal, and certainly knowledgeable, this just isn't the gritty, merciless, less than G-rated crowd that one would find at the old barn.  Call the WFCU Centre a kinder, gentler arena if you will.  An inflatable blimp also keeps the crowd entertained at intermission, as does the cool mascot.  This is still the OHL though, so the hockey is excellent, the level of play is very high, and the games intense.  Kingston gave Spits fans little to cheer about however as they took a 6-3 win over the hometown squad.  Despite being less than a decade old you can feel a sense of history here, with the banners hanging from the rafters and the decades of tradition that the Spitfires have built upon.  As a hockey purist we miss places like the old Windsor Arena, but when compared to other similar arenas, the WFCU Centre does seem like a place that has a bit more of a hockey atmosphere and tradition and less of that sterile feel you find at other places.  That doesn't mean we wouldn't give up the comfort of this arena to go back and experience the mad house again, but the WFCU Centre does provide a solid hockey experience for fans, and the Spitfires fans do they part by supporting the team and filling the seats.  With the steep rake of the seats this arena does its best to provide an intimidating place for opponents to play as fans feel like they are on top of the action.  The combination of the arena layout, and the still boisterous fans in Windsor seems to make things more enjoyable here than at other newer venues across North America. 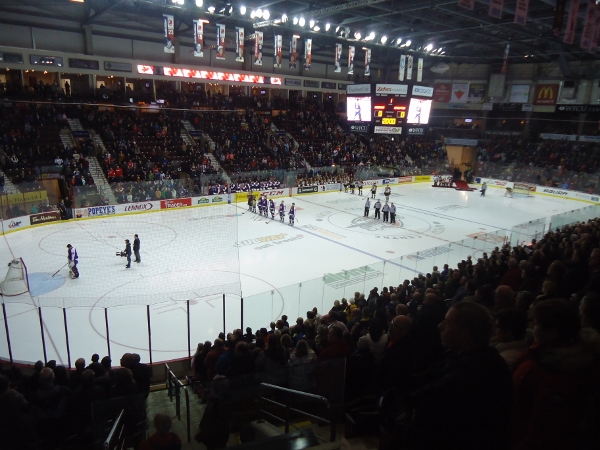 Other information about the Windsor Spitfires can be found at:  Spitfires Home

More photos of the WFCU Centre can be found  Here