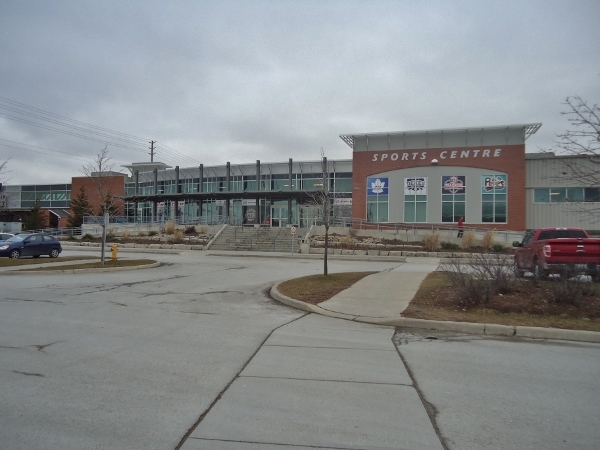 When you think of London, if you are a hockey fan, you think of the Knights.  One of the most high profile teams in all of junior hockey does indeed reside downtown, but there are also other hockey options in this city for those who either can't get Knights tickets at the usually sold out Budweiser Gardens, or who choose to follow a lower level, but entertaining brand of hockey on the East side of town.  The London Nationals have competed on the Junior B circuit with much success, winning the Sutherland Cup as recently as 2013.  Having opened in 1995, the Western Fair Sports Centre sits near the other Fairgrounds entertainment facilities, including a horse track, agricultural expo areas, and nearby shopping.  A large parking lot sits outside the arena, and the building has modern look to it, with red brick and lots of glassed in areas.  A large raised letter sign sits above the entrance, and as fans approach the building they go up a set of stairs in a bit of a nicely landscaped courtyard.  The building looks large, but has a low roofline.  This arena gets a lot of community use, as it contains 4 ice pads, including the main arena which is of Olympic size.  Everything is nicely kept here, and once inside the main entrance there is a wide concourse with a pro shop off to your left, and the main arena straight ahead, although the windows overlooking the arena are blocked by advertising.  You are directed up a couple steps to the ticket table and main concession lobby to purchase your tickets.  A general admission ticket for this Saturday afternoon matchup against the LaSalle Vipers cost $10, with a printed lineup program another 2 bucks.  There is a small Nationals merchandise kiosk area just at the entrance to the arena itself, and the rest of the wide concourse overlooks the 3 other ice pads, and features an onsite bar and restaurant which overlooks the main arena, as well as a Pizza Pizza concession counter.  Western Fair Sports Centre gives fans in London an opportunity to enjoy entertaining hockey at a far lower price than the OHL has to offer.

Once inside the small door into the arena itself you find a mid-sized arena which features 7 rows of dark blue plastic seats circling the ice in a horseshoe shape.  The end wall is devoid of seating and features the only scoreboard.  The upper concourse circles above the seats, and offers standing in addition to the 1500 seats which are listed as the capacity.  The ceiling is low, and the ice is wide with the Olympic configuration giving a home ice advantage to the hometown Nationals.  Like most arenas in Ontario, the entire seating area is closed in by the dreaded netting, obscuring the views a little bit unless you sit down low.  The inside of the arena looks a bit plain, with gray walls and white metal ceiling rafters which are exposed along with some ductwork.  The glass on the sides on the rink is very low, and aside from the netting in the way the seats offer good sight lines.  This is certainly a sufficient building for Junior B hockey, and the fans seem to support the Nationals, and not think of them as second fiddle in this town.  There is a pressbox which sits above the concourse and is built into the arena wall above one corner, and there is quite a bit of advertising in place throughout the arena, both on the dasher boards and on the concourse.  The low ceiling means there is no center ice scoreclock.  At intermission everyone heads out into the main concession lobby for a snack or a drink, or to watch an NHL game on TV as the lobby has a pretty tricked out setup where a 4 sided scoreclock is equipped with TVs and hangs from the ceiling showing NHL games.  The checkered floor in the lobby is a bit gaudy, but seems to fit in with the surroundings.  Despite being 20 years old Western Fair Sports Centre has the feel of a new venue.

The gameday experience at a London Nationals game is solid, with the game as the focal point, but community activities play a key role here.  A crowd of over 1000 was on hand for this game, and the most vocal and rowdiest fans seem to congregate on the end behind the net.  This is a crowd that knows their hockey and appreciates a hardworking performance.  They are also not afraid to let the officials know what they think when needed.  The Sports Centre has a couple quirks which keep things interesting from an arena standpoint.  The dasher boards in front of the player benches and penalty boxes are clear, something that you don't see everyday.  This setup lets anyone who is not old enough to have seen a Minnesota Fighting Saints game in the WHA get a closeup look of the players socks and knees from across the ice.  We are not sure of the reason for this design, but it is a first for us in over 140 different venues.  There were quite a few announcements during the game, but it was not full of meaningless advertisements.  They honored the local student safety patrols and even had a cop car on the ice before the game.  There were fan shootout contests at intermission, as well as mite hockey during the other intermission.  Despite all of the ancillary activities the fans were there to cheer on the Nationals.  The Toronto Maple Leaf-like logo and uniforms date back to when London was actually an affiliate of the NHL club back in the 1950's.  Fans seem happy with the colors and the tie-in to the NHL club.  The game itself was excellent as the Nationals took a 4-3 win in a physical contest.  Many of the fans stuck around after the game as it was also "skate with the players" day and fans could skate with the Nationals and take time to meet these hardworking players on the ice.  The fans certainly left happy, and with a early afternoon start there was plenty of time to head up the road to catch an evening game.  The Western Fair Sports Centre is a modern, well kept venue that provides fans access to one of our favorite levels of hockey (Junior B), and those fans support the Nationals quite well, despite having one of the most well known clubs in junior hockey a couple miles up the road.  There is more to do in London than to go watch the Knights, and fans who choose to enjoy the Nationals games have a comfortable venue in which to do so. 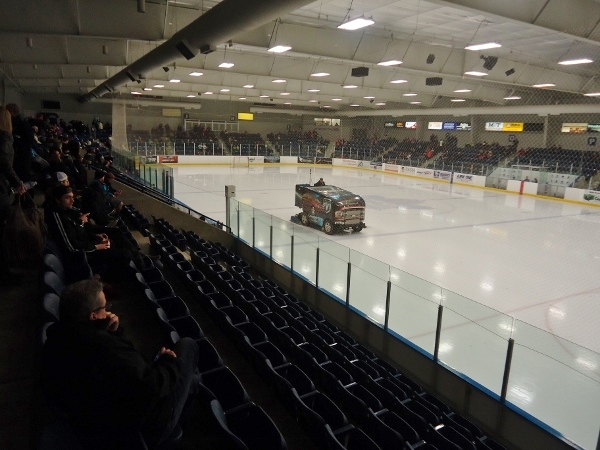 Other information about the London Nationals can be found at:  Nationals Home