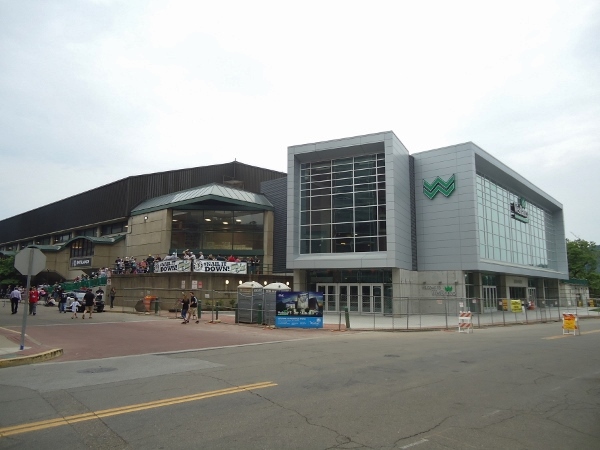 When we think of minor league hockey we usually picture arenas from the 1970's and enthusiastic crowds in rust belt cities.  WesBanco Arena in Wheeling fits that description to a "T", however things are changing a bit in Wheeling as the arena was in process of a renovation when we visited for some June hockey (yes, June!) during the ECHL's Kelly Cup Finals.  This venue along the banks of the Ohio River in downtown Wheeling was hopping as we attended a nearly sold-out game 5 of the final series against the Allen Americans.  The arena opened in 1977 as the Wheeling Civic Center, and is the oldest continuous home of an ECHL team as the Thunderbirds came to town in 1992.  We visited back in 2007, in the infancy of Roaming The Rinks, but wanted to return to get more photos as we weren't taking may photos at the time.  A block party was taking place in front of the arena, and fans hung out and tailgated in the adjacent parking garage waiting for this summertime hockey game to begin.  The city went all out too, changing the street name where the arena sits to Kelly Cup Way.  A new facade is under construction which will contain the box office, but for now the box office was a small shed-like building at street level.  The old 1970's arena exterior is a bit different now with a large glass atrium, but when looking closely to the sides and roof of the structure it maintains its old bones.  The exterior profile of the building is that of a large square.  Fans congregated outside along the raised stairways waiting to enter the game well before the gates opened.  The brown metal roof and concrete sides of the arena still resemble the old school arenas that you remember, but the new facade and entryway will freshen things up quite a bit. We secured a top row seat for $18 ahead of time, and the excitement level that you would expect from a championship series could be felt outside before the game started.  Wheeling has an old school barn which screams "minor league hockey" and has a cool and unique team name to go with it.  The renovations will keep this building a viable place for today's minor leagues, although regular season attendance has been near the bottom of the league for the last few seasons.  Nonetheless, WesBanco Arena is the kind of arena that is synonymous with minor league hockey.

Entry into the arena is onto the main concourse, which sits part way up the seating bowl.  Wheeling is honestly not really a hockey town, and the concourse is full of memorabilia and photos of local athletes in many sports, although basketball and football seem to take the most prominence.  There are several concession stands on the concourse, and an eclectic mix of decor, including wall size mural paintings of historical figures in Wheeling, and jerseys and photos of area sports stars, as part of the concourse is designated as the Ohio Valley Sports Hall of Fame, including tributes to Celtic star John Havlicek, and baseball's knuckle balling brothers Joe and Phil Niekro.  The concourse is well kept, and a display to the Nailers hat tricks features a case full of hats thrown by fans.  There are essentially 2 concourses here, with an outer concourse running all the way around the arena, and a separate inner concourse with aisles running in front of the seating sections.  The main concourse is carpeted and has cinder block walls.  A decently stocked team store sits on the corner of the concourse.  In the arena itself, you will find a four grandstand design almost identical to the arenas in Binghamton, Portland, and Cornwall, all of which were built by the same design firm within a couple year of each other.  Capacity is listed at 5406 for hockey and a very good crowd was on hand.  Seating finds 23 rows of gray padded seats, 13 rows of which are below the upper concourse aisle.  Gone are the orange seats which were in place until the recent renovation.  The building has a flat ceiling, which makes things loud, and a nice new video board hangs above center ice.  Walls are painted gold in tribute to the teams affiliation with the Penguins, and there are banners from past teams, including the Thunderbirds.  One thing noticeable immediately if sitting on the end of the ice is the sight lines are obstructed as you can't see behind the net, and can barely see the net itself in some spots.  The ice surface is 12 feet shorter than regulation at 188 feet, as the rink is shoe-horned into the floor space of the arena, adding a bit of character with the odd size.  An open pressbox sits above the seating area on the side, and overall the recent renovations have cleaned the place up quite a bit.  Some bar seating is on one end, as are tables along the concourse, but there is really no luxury or suite seating to be found, adding to the gritty charm of the arena.  Despite the renovations which make WesBanco Arena a bit more comfortable and up to date it has the feel of an old school venue, and has the vibe of a great place to watch hockey.

The game day presentation at WesBanco Arena for a Nailers game is solid.  Factor in that we were at a hockey game in June with a title on the line and you can imagine how the atmosphere was.  A very active roaming announcer got the crowd riled up with waves of the rally towel.  His style is not really something we usually enjoy, but it seemed to feel right on this night.  The place was nearly packed and the fans were vocal even during warmups, so the energy level in the building was very high.  Intermission activities included chair races, and a chuck-a-puck contest, but most fans were here to root for the Nailers.  The noise level during the action was loud, and the "Let's Go Nailers" chant could be heard often. The game itself was among the most intense we had ever seen as this was game 5 of the series.  Allen claimed the win with a goal 17 seconds into overtime and would claim the series the next game back in Texas, but fans seemed to linger around the building a bit after the game ended, and didn't want the season to end.  The traffic after the game lasted for nearly an hour trying to empty out the adjacent garage, but we greatly enjoyed some June hockey and agree that minor league hockey belongs in places like WesBanco Arena.  These older mid-sized arenas have a lot of character and contain lots of memories.  Although Wheeling teams have not been powerhouses over the years you feel a sense of history and tradition when attending a game here, and get a throwback feeling when watching the game.  With the new renovations hopefully WesBanco Arena will host hockey for many years to come.  Hockey is a working class game, and belongs in environments such as this.  WesBanco Arena is a great example of how hockey used to be enjoyed during its glory years a couple decades ago, and now fans can enjoy that same feeling with more comfort here along the banks of the Ohio River. 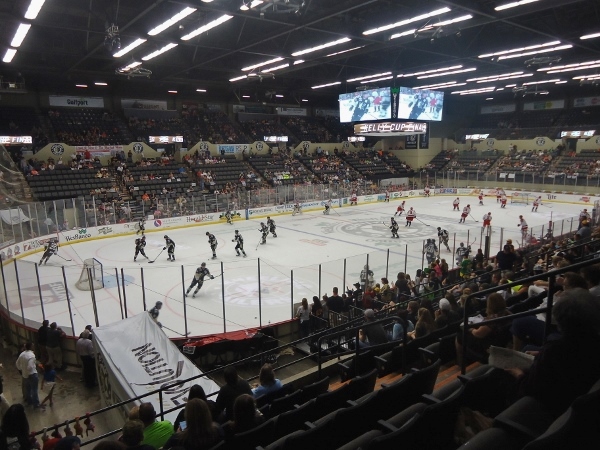 Other information about the Wheeling Nailers can be found at:  Nailers Home

More photos of WesBanco Arena can be found  Here