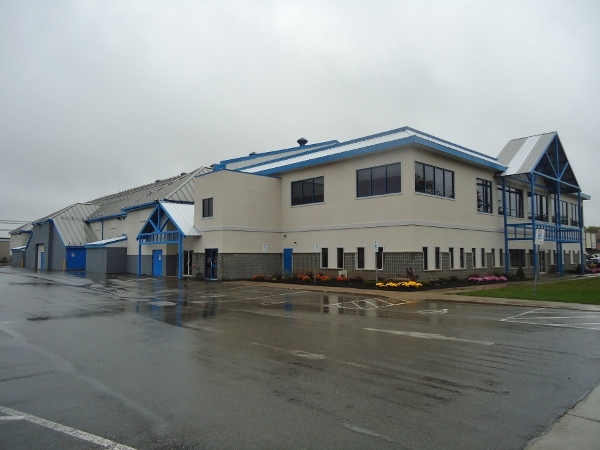 The second half of today's Junior B double made for short drive from Port Colborne to nearby Welland, and featured another old barn, although this one is clearly more stately than today's first stop.  Welland Arena is a well maintained building on the banks of the Welland Canal, and looks newer than its age.  The arena opened in 1946, and features a dark gray cinderblock and light tan exterior, and a gray metal  barn-shaped roof.  The most noticeable feature of the rink's exterior is the indisputeably gaudy bright blue trim which accents the roof, doors, and entrances.  There is no need to adjust your TV set.  The blue is bright, trust me.  The  marquee sign along the road and the front quarter of the building are part of a mid 90's addition, which added offices and administrative space, but inside this is a nicely maintained, and slightly renovated classic hockey barn.  There is a small parking light beside the arena, and the parking lot also shares space with a second, free standing arena known as the Welland Youth Arena.  The two buildings are not connected. The arena has been a mainstay in Niagara Region sports for many years, and is one of the larger capacity arenas in the area.

The main entrance to Welland Arena is through a small doorway on the side of the building, which leads to a narrow hallway with a box office window off to the side.  Eight Bucks gets you a ticket to the game, and just past the box office is an older lobby style hallway which has windows looking out to the end of the arena.  The concession area is nearby as well, and consists of a simple food counter.  There are a couple tables set up for the booster club and program sales, etc.  To access the arena itself you enter through one of 2 doors near the end of the rink.  There are 2 seperate concourses if you will, but neither leads anywhere other than the seating area.  The lower corridor runs underneath the seating area, and is virtually unchanged since the 1940's, save a fresh coat of colorful paint.  The upper concourse runs atop the seating area in a U-shape.  The seats are newer plastic seats, of alternating red and blue sections, and the pitch and sight lines of the seats is very good. I am guessing that the plastic seats are part of the mid 90's renovation, but I could be wrong.  There is some dead space in the lower part of the corners, but you can see very well from just about any seat in the house (well, sort of).  The main drawback to the fan experience is that the entire seating area is obstructed by the God-awful white netting which extends above the glass to almost the ceiling.  I get it, hockey is dangerous and some fans could get hit in the head by a puck, but the netting ruins much of the fun.  A second net surrounds all 5 sides of the classic style center ice scoreclock.  I guessd they don't want the scoreboard to sue someone either.  Nonetheless, despite the major drawback of the netting (and it is a major drawback in our book) this is a classic building which is well maintained.  Exposed metal rafters add to the charm, and an basic pressbox hangs from those rafters on one side. Standing is allowed and directly behind the glass on the end without seats.  Atop short end of the arena is a glassed in luxury box, which was closed for this game.  There is ample standing room atop the seating area as well, and fans essentially spread out around the arena as the crowd was certainly small for this arena, which is listed as having a little under 2100 seats, but could certainly hold at least 2800 when factoring in standees.

The game presentation for the Junior Canadians is all business, and the small crowd of only about 300 or so on this rainy Sunday evening was made up of a lot of older folks.  They are here for the hockey, not intermission entertainment.  In stark contrast to most of the arenas we attend the Welland Arena's boards are completely devoid of advertising, making the place, and the game experience, seem as vintage just like the building.  Further keeping the historic theme is the old fashioned clock which sits in the corner wall, above the glass on the end without seating.  The clock is of the 1940's era and has been given historic recognition by the Province of Ontario.  The on ice action in the game against Niagara Falls was intense, and the upset, nail biting 2-1 win by the Junior Canadians in a shootout had the small crowd very excited.  It is always fun to attend a game at such a classic arena, and although there are plastic seats the arena has an atmosphere that exudes old time hockey.  If the arena gets a large crowd for playoff action of other games a visit is certainly worthwhile.  Welland Arena is certainly capable of holding big time hockey, and I am a little surprised the OHL never played here in the past.  You have to take advantage of every opportunity that you get to be able to experience throwback buildings such as this.  The fact that it is still used for the GOJHL is a good thing for arena fans, and hardcore hockey fans alike.  Feel free to bring your kids to Welland Arena too, as there is no conceiveable chance that they could get hit by a puck due to all of the netting. 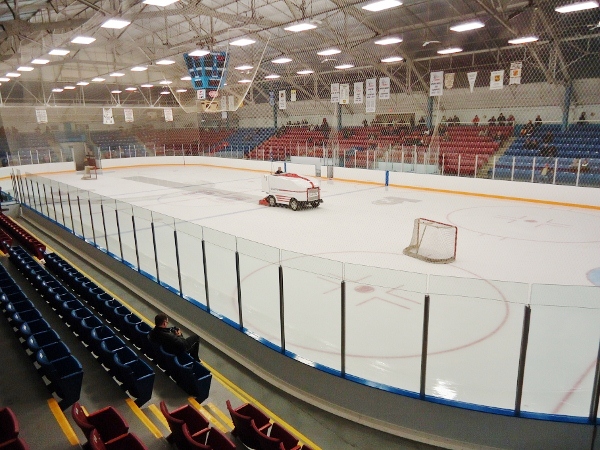 Other information about Welland Arena is available at:  Arena Home