The second half of the RTR double header for the day found a drive of an hour or so from our afternoon stop to see the Brampton Battalion win a playoff game, and found us in Brantford, birthplace of some guy named Gretzky.  The Wayne Gretzky Sports Centre started hosting the GOJHL's Golden Eagles in the 2011-2012 season. It is a newly opened facility that sits of the same site as the city's former sports complex of the same name, and is within sight of the 403 Freeway.  It is a large, warehouse like structure which houses a total of 4 ice pads.  The parking lot and adjacent buildings were still under construction when we attended this late season game.  The main arena itself has dark gray concrete walls, and a bright blue sign with the letters WGSC on it.  There is an electronic message board type sign over what looks like an entrance on the corner of the building announcing coming events, although the actual entrance to the arena itself is inside the building, which is accessed through the main building entrance around the corner.  There is a large parking lot, and the whole complex has a rather industrial look to it.  They designer was obviously going for a unique design feature with the small windows on the walls of the arena, as there are painted white silhouettes of hockey players, they are headless however and their heads are made up of the circular glass windows.  I'm not sure this actually adds anything to the appearance of the building, but they get an A for trying.  Nonetheless the size of the building is impressive, and it still has that brand new and almost not quite finished look as there is still grass to be planted etc.  The Golden Eagles played for years at the Brantford Civic Centre before moving to this modern building this season.

Once inside the building there is a hallway that runs along the center of the building, from one end to the other  It has modern stylings, and there are large glass windows overlooking the 4 ice pads in the building.  There is a single concession stand, and a box office window where they with selling tickets to tonight's playoff game, with quite a backup at the ticket window I might add as there was a big crowd on hand.  In front of the main arena there is a restaurant which has 2 levels and overlooks the ice.  There is lots of Gretzky memorabilia inside the restaurant including several jerseys.  To enter the main arena itself you enter through the door next to the restaurant.  There is also a stairway which leads up to the upper concourse of the arena as well.  A ticket for the game set you back 12 bucks,  and aside from a game program there is no Eagles merchandise available at the arena.  The seating layout and configuration of the WGSC is a little odd, but certainly not bad.  The ice surface has a carpeted walking track suspended above it, only the track is layed out in an offset manner so that one side of the seating has the track above it, while on the main grandstand side the track runs behind the seating area.  All of the seats are navy blue, and brand new since the building just opened.  The main side features a large pressbox and 11 rows of seats that run the entire length of the ice surface.  The opposite side of the ice has the track running above the 6 rows of seats.  There is no seating on the ends, although the restaurant overlooks the ice on one end, and the fans lined the glass on the other end.  When sitting on the short side it feels kind of claustrophobic as there is a ceiling above the seats and that entire side is also enclosed by protective netting.  If you sit on the main side there is not net to block the view.  I am not a fan of the nets, but clearly in this case the net on the ends and one side is meant to protect walkers and runners who use the track as that part of the track is suspended so as to be nearly hanging over the ice.  The closeness of the track to the ice makes for some great standing vantage points to watch the game, if you can get over looking through a net all game that is.  A couple quirks are built into the new building, although I am sure unintentionally so.  The press box is very large, and juts out into the seating area itself rather than sitting behind it.  If you sit in the top few rows next to the press box one entire end of the ice is in a blind spot.  The other odd thing about the set up is that the steps leading down the seating aisles seem to not be deep enough, or are laid out too close together as you feel like you are going to fall when walking, and I did notice a sizable number of fans stumble a bit when walking to their seats.  Despite the few odd features the WGSC is a comfortable modern building, and many of the seats provide a great view of the action.

The game experience at the WGSC was good, although Junior B playoff games never seem to disappoint.  The fact that the Golden Eagles were playing nearby rival the Cambridge WinterHawks added to the atmosphere as many fans from Cambridge made the half hour ride south to cheer on their team.  I was fortunate enough to attend last night's game in Cambridge between these 2 teams as well.  The arena website list the arena as having 1,100 seats, and they were all full, with many fans lining both the running track and the glass on the ends.  It is always fun to be in a packed arena, and the crowd was vocal and there to support their team.  There were lots of homemade signs, including some brought by some Cambridge fans, and the game was clearly intense as it was a game 7.  The overall presentation was basic.  There were no contests or give-aways.  Surprisingly for a new arena the PA system was not that great, as it was both muffled and rather quiet, making it almost inaudible.  Fans were not there for give-aways or mascots or a great PA however, as they were there to see some intense, physical hockey, and that is what they got as the Golden Eagles took a 4-2 win and advanced to the next round of the playoffs.  It was a great game, and a fun, although all business, atmosphere.  With only a couple exits to the parking lot and a large crowd on hand it took a long time for the lot to empty out.  For an arena at the Junior B level the Wayne Gretzky Sports Centre is about as modern as it gets, and has about the perfect seating capacity level for this league.  The fact that there is lots of memorabilia of "The Great One" in the restaurant makes this arena a good place to stop along your hockey travels. 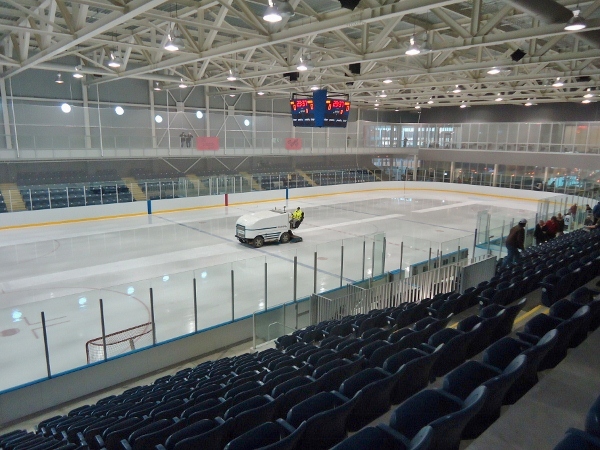 Other information about the Wayne Gretzky Sports Centre is available at:  Arena Home