The Junior A level of hockey in Canada has a wide variety when it comes to arenas.  Some teams play in former AHL or Major Junior arenas such as Cornwall and Newmarket.  Many teams play in newer multi-plex rinks with a decent amount of seating in one of the rinks in the building.  The Burlington Cougars, a team with quite a rich tradition of success for many years, play in a building that doesn't fit either of the aforementioned types of buildings.  Wave Twin Rinks is home of the Cougars, and, although it does fit into the multip-plex community arena category, is a little different in that both rinks are virtually the same, and neither has an abundance of seating.  Wave is set in an industrial park area, and its ordinary outward appearance could mean you would mistake the arena for any other warehouse or office building in the area.  Its pale blue walls and ornamental concrete facade blend in with the other businesses in the area.  A large parking lot sits in front of the building, and there is a nondescript entrance at the center of the building, covered by an awning.  What would bring us to such an ordinary looking community arena?  Well, this Friday game featured a 1pm start and was only 20 minutes down the road from our planned evening stop to see the Hamilton Bulldogs.  The Cougars moved from the larger city owned Central Arena in Burlington to this location in 2007, and the facility is actually owned by the father of NHLer Cory Conacher.  We were unable to find information on how old the building is, but it most likely opened only a short time before the Cougars moved in.  The facility bills itself as a training facility, with a couple mini rinks in addition to the 2 full size pads, and what appears to be a physical therapy type gym in the upstairs of the building.

Once inside the main doors there is a table set up selling Cougars tickets and handing out programs.  There is a decent sized lobby featuring tables, a pro shop and some vending machines, as well as a trophy case displaying Cougars awards from the past..  Windows overlook both rinks, simply known and the the Red and Blue arenas.  The Cougars play in the Blue Arena.  A simple door off of the lobby finds you standing at the end of the rink at ice level.  A ticket for this afternoon matchup against Georgetown cost $15.  The general layout of the buildings finds both ice pads separated by a series of locker rooms and steep bleachers 3 rows high perched on balconies hanging over the hallways to enter the locker area.  There are steps to get up to the seating, and at the top of the seating areas is a restaurant and bar overlooking both ice pads, know as the CrossBar & Grille.  The Blue Rink where the game is also features a couple sets of aluminum bleachers at the end of the ice, and one small set of bleachers next to the benches, which are across the ice from the locker rooms.  I would guess the capacity for the Blue Arena at no more than 500, and a good crowd was on hand for a Friday afternoon, with the box score listing the crowd at 400.  The seating layout is very unconventional, and the balcony seats are perched over the ice, making for a great vantage point to watch the game.  Despite there being only 3 rows of seats on the sides getting to your seat can be rather difficult as there are blue metal railings running in front of each row, and not many aisleways or designated areas to walk through the bleachers to get to your seat.  Essentially once it gets crowded you need to find a seat, and either duck underneath, or swing your leg over the top of, a metal railing.  Once you are seated there are also roof support columns situated right in the middle of the seating area, meaning you may need to peek around a pole to see the action. The seats themselves are wooden benches painted blue.  The end bleachers are also somewhat unconventional as they have thick pads attached to the seats, almost looking like something you would see in a bowling alley.  Some folks chose to stand at ice level in front of the locker room area, essentially adding another row to the length of the ice where fans can watch the action from.  This awkwardly laid out arena is certainly different.

The level of play in the OJHL is very good, as evidenced by the banner hanging on the far end of the arena paying tribute to the over 30 Cougar alumni who have played in the NHL.  It is somewhat surprising that in a city such as Burlington with a population over 160,000 that the Junior A team plays in such an unconventional arena.  The drawback of the sightlines and odd layout of the arena does not keep the crowds away though, as a great crowd was on hand to cheer for the Cougars.  The Friday afternoon start may have not given a true indication of the normal game presentation as the DJ/PA announcer seemingly showed up late as there was no music during warmups, and the restaurant did not open until after the first period.  Also the concession stand in the lobby remained closed during the game.  The presentation is simple, with no contests or intermission entertainment.  Hockey is the main attraction.  Thankfully this also meant that there was a lack or sponsor announcements or commercials over the PA.  The game itself was fantastic, with lots of hitting, good goaltending and the Cougars taking a 3-2 shootout win in front of a happy crowd.  The afternoon game attracted a lot of young kids and families, who seemed to be having a great time.  They enjoyed the action so much you would think they were at a Maple Leafs game. Despite the shortcoming of Wave Twin Rinks when it stacks up against other Junior A arenas it did provide a unique view of the action, a boisterous crowd, and a very entertaining hockey game, making our stop here very much worthwhile. 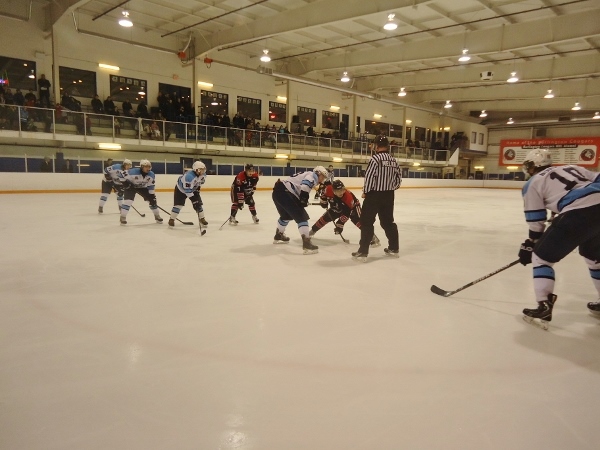 Other information about the Burlington Cougars is available at:  Cougars Home

Other information about Wave Twin Rinks is available at:  Arena Home