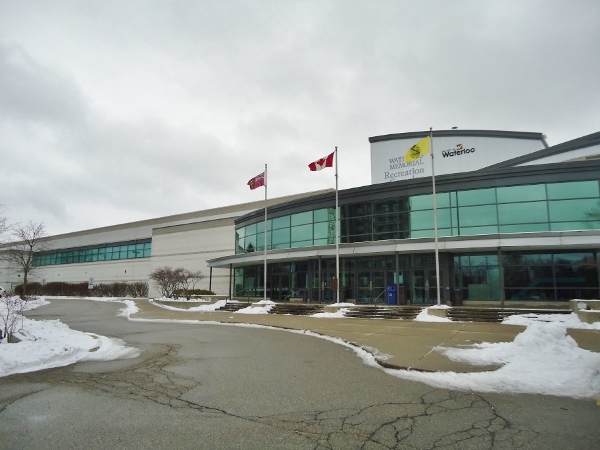 It is always enjoyable to attend a game at the home of a franchise that has been iconic in the world of hockey, and one that has stood the test of time.  The Waterloo Siskins certainly fit that bill, having been formed in 1937, and, aside from a brief time off during World War 2, have been playing in Waterloo continuously ever since.  The franchise is so old that the team nickname "Siskins" has lost it meaning in modern times, as it refers to British military aircraft used by the Canadian Air Force in the 1920's and 30's. Nonetheless, the current incarnation of the Siskins is still a staple in Waterloo tradition.  Located not far from the Uptown Waterloo area, the Waterloo Memorial Recreation Complex opened in 1993, and serves as home of the Siskins as well as the Wilfird Laurier University Golden Hawks.  In addition to the ice rink there is a large community pool and other facilities attached.  Surrounded by a large parking lot, the building features a modern looking exterior.  The gray and tan cinder blocks on the exterior walls are offset by green tinted windows.  An arching pale blue roof sits atop the arena, and a sharp looking glassed-in entryway sits at the lobby entrance of the building.  Once inside there is a large lobby area, a box office window where a $10 ticket was secured for this Sunday afternoon Siskins matchup against Cambridge, and some bench seating.  A hallway leads to a snack bar which seems to be in use most of the time for arena and pool patrons, and there is a very nicely done mural commemorating Waterloo's veterans at the back side of the lobby.  Despite being only a bit over 20 years old the building looks rather new.  Waterloo Memorial Recreation Complex certainly sees much greater use than just as an arena for the Siskins, as the pool and other recreational facilities get quite a bit of use by locals, but the arena itself, currently named Sun Life Financial Arena, is a good one.  Entry into the arena proper is up a set of stairs from the main lobby of the building, and the Siskins have quite a tradition of playing Sunday afternoon contests. As far as modern community arenas go, Waterloo Memorial Recreation Complex is modern, visually appealing, and very functional.

Once inside the doors of the arena at Waterloo Memorial Recreation Complex you find yourself on the wide carpeted running track that serves as the upper concourse to the arena.  A seating bowl featuring 11 rows of teal, gray, and black plastic seats circling the entire Olympic sized ice surface, and comprising a listed capacity of 4132 for hockey.  Exposed pale blue ceiling beams sit above the ice, as does a simple, yet functional scoreclock.  Banners for both the Siskins and the Wilfrid Laurier squads hang from the rafters as well.  Thankfully there is only protective netting in the end zone areas and the center ice sections are free of the obstructive netting.  Sight lines are quite good, and the arena has a big time feel to it.  Historical aspects are maintained here, as on the end wall is a Waterloo Hockey Wall of Fame paying tribute to past Siskin greats and a number of Waterloo residents who made the NHL.  Above the tribute wall is the original signage from Waterloo Memorial Arena, the 1940's era barn which was a predecessor to the current arena.  In addition to the snack bar in the lower lobby there is a concession stand on the corner of the concourse.  Nearby is a beer stand, 50/50 table and a Siskins merchandise kiosk, making the corner area of the concourse a busy one on game day.  A second scoreboard sits on the end wall above the concourse on the end opposite the main entrance.  Waterloo Memorial Recreation Complex has a bit higher capacity than many arenas in the GOJHL, and even a decent sized crowd can seem rather small here.  Nonetheless, this is a modern building which not only offers good fan amenities, it also preserves a bit of historical significance and pays tribute to the team's and community's past.

The gameday experience and presentation at a Siskins game is centered on fun.  A small crowd of less than 400 was on hand for this New Year's Weekend game, and with such a large capacity the crowd seemed dwarfed by the arena size.  Most fans on hand seem to be regulars who are vocal in their support of the Siskins, and nearly the whole crowd seemed to congregate behind the team benches and in the corner near the concession stand.  Despite the small crowd the presentation is polished, and featured quite a few lucky program giveaways and some unique features.  The PA system in rather quiet, and the PA announcer is a female here, something you don't see every day.  Between period entertainment features a chuck-a-puck contest and a fan shootout with a on ice announcer who is also a female.  The crowd gets into things, with a "Go Siskins Go" chant popping up rather frequently.  The team also has a unique concession item, selling Siskin  Sundaes, an ice cream staple that is enjoyed by the fans at the games.  We attend games at a lot of different places in various leagues, and the goal song has often become a routine and repetitive exercise in pressing play on one of the same 25-or-so songs that are popular in the current era.  It is because of that trend that when we hear a unique, and appropriate goal song that we take notice.  When the Siskins score a rocked-out version of Swedish super group Abba's "Waterloo" is played in the arena.  Cheesy, yes, but very catchy and unique to be sure.  The vocal Siskins fans had a lot to cheer about at this game, and the goal song was played 6 times with the home team taking a 6-3 win.  As the Siskins left the ice another unique and relevant song, the country song "Waterloo" by 1950's cowboy singer Stonewall Jackson was played over the PA.  We had a great time and enjoyed the unique touches in the presentation which made the experience a bit different than the everyday Junior B game. We are never a fan of Olympic sized ice, but thought that the charm of the Waterloo Memorial Recreation Complex, the attention to history with the old arena signage, Wall of Fame and veterans mural, and the fun, yet slightly kitschy, song choice made for an excellent afternoon of hockey.  Waterloo Memorial Recreation Complex is a solid place to watch a game, and even without a large crowd the unique fan culture and high level of support makes for a fun atmosphere. 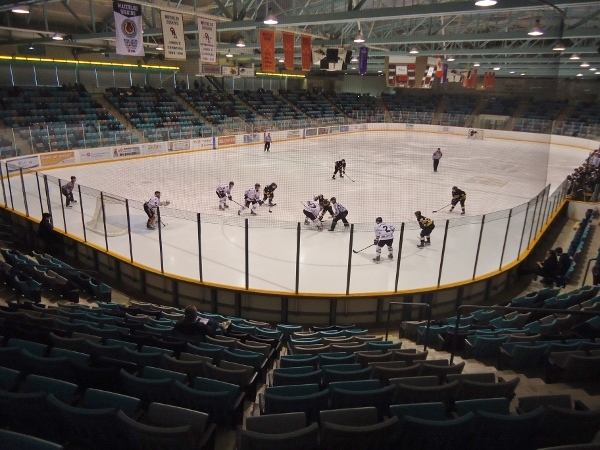 Other information about the Waterloo Siskins can be found at:  Siskins Home

Other information about Waterloo Recreation Complex can be found at:  Arena Home

More photos of Waterloo Recreation Complex can be found  Here