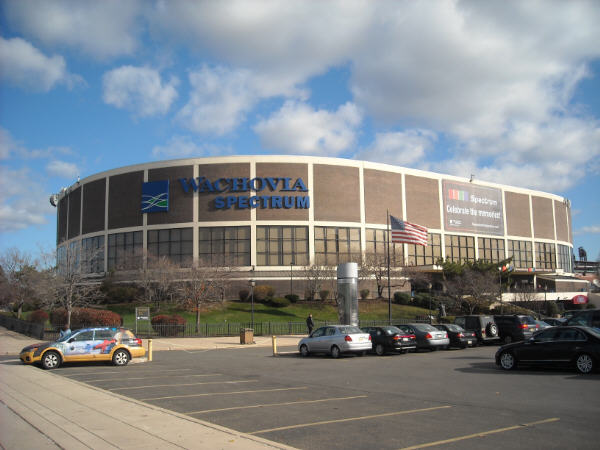 Woo-hoo!  The Spectrum, you know the home of the Broad Street Bullies and those rough and tumble Flyers teams of the 1970s, when the NHL was actually cool.  This was my destination for an 11am Wednesday game featuring the AHL Phantoms taking on the Albany River Rats.  Philly is one of those towns that for me is nearly too far to go there and back for an evening game, yet at a little over a 4 hour drive is too close to justify getting a hotel for the night.  When I saw this morning game scheduled, and took into account that this is labeled as the final year for the historic Spectrum, I figured there was no better time hit this classic old barn for a game.   Having opened in 1967 and the home of the Flyers for many years until they moved across  the parking lot to their newer arena this fabled house of hockey has been home to the Phantoms since 1996, however is  slated to close, and possibly be demolished after this season, so I am thankful I was able to catch a game here.

The (fill in the bank name as it has chaged several times over the years) Spectrum sits on the same property as the Wachovia Arena which is the current home of the Flyers, and also shares the property with the stadiums for both the Phillies and the Eagles.  The arena is surrounded by acres of parking, although parking does not come cheap as it set me back 12 bucks to park for today's game- way too much for an AHL game if you ask me.    The building is well maintained, yet has that classic 1960s exterior look.  There are a few neat statues on the property, including one of Kate Smith, singer of "God Bless America", and a hockey statue near the box office area as well.  You walk up a flight of stairs outside before entering onto the concourse which circles the entire building.   I was surprised at how current and modern the concourse looked to me as from reports this building is not even up to AHL standards.  I disagree however, and think that the place, although too big for AHL hockey in my opinion, is much nicer than many other buildings in the league.  The concourse is quite wide and had a large variety of food and souvenir concessions, all at big city prices however.  There are signs of the Phantoms logo, which I consider one of the better logos in hockey, throughout the concourse. The rest rooms are located at the outside of the concourse, and you have to go down a flight of stairs to get to all of them.  The layout is pretty good as you enter the top of the lower seating bowl directly from the concourse, or go up a flight of stairs to the bottom of the upper level, which is a balcony of sorts.  I was surprised how small and flimsy the metal railing looked which seperates the walkway at the front of the upper level from the edge of the balcony.  It is low and small and I can easily see someone tumbling over the rail, although I am not sure if that ever happened or not.  I sat in the upper level and the sight lines are excellent, as the balcony hangs over the lower level of seats, thus making even a high seat stll very close to the ice.  The seats are all a maroonish color, and give the place a dark feel.  The seats are all padded and not the hard plastic type you find at most newer arenas.  The rake of the seats is not overly steep, but steep enough to offer a decent view.  Obviously as a former NHL building the place has a large capacity, holding over 17000 for hockey.  The Phantoms have dark curtains blocking off all but the first 8 or 9 rows of the upper level, so I would guess there are about 12000 seats available.  This was billed as a "school day game", and busloads of kids were there for the 11am start.  The announced attendance of 6100 looked small in this large building despite the attempt to make the place more intimate with the curtains blocking off the upper seats.

The game presentation itself is decent, and surprisingly not too commercial as I figured it would be in a large city.  The Phantom mascot was decent and was a hit with all the kids at the game.  They do a good job in keeping with Philly hockey tradition by singing "God Bless America" in addition to the National Anthem, and had a group of kids handle those duties for this game.  My front row balcony seat cost $18, although I could have opted for a $14 seat as there were plenty of open seats and I could basically sit wherever I wanted.  The center ice score clock is an old school jumbotron type board which does not have replays, and plays silly graphics all game, although I am not a big fan of replay boards anyway.  The music selection during stoppages was OK, but nothing memorable.  The PA system did sound rather muffled from my upper level seat, and I had a hard time hearing the goal and penalty anouncements.  It is hard for me to asses the atmosphere at a Phantoms game as with this being an 11am game on a weekday they did not get the usual hockey crowd.  The kids in attendance, along with the die-hards which you could clearly pick out of the crowd, all were very vocal, and I can tell this place would get VERY loud when a big crowd is in attendance.  I thought a morning game might also lack some intensity on the teams' part, but the game itself was decent, although the Phantoms trounced the Rats 5-0.  There were a couple scraps, and some decent hits, so everyone was happy.  They also interviewed first star Goalie Scott Munroe on the ice after the game, a practice I am seeing more of and like a lot.  Overall it was a fun day at a classic older barn with a ton of history.  If you haven't made it to the Spectrum I recommend you get there this year as you do not want to miss out. 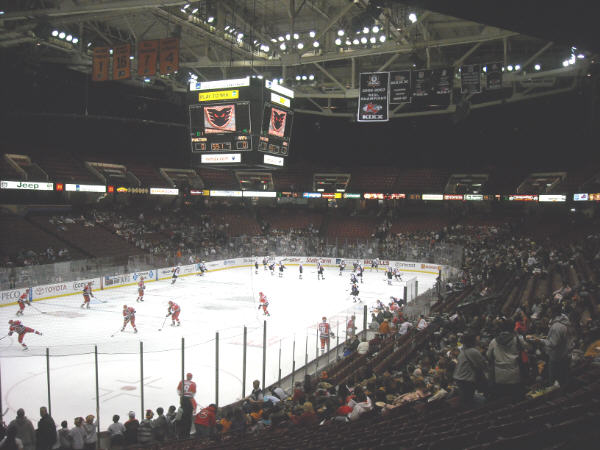 Other information about the Philadelphia Phantoms is available at:  Phantoms home

Other information about the Wachovia Spectrum is available at:  Arena home

More photos of the Wachovia Spectrum are available Here