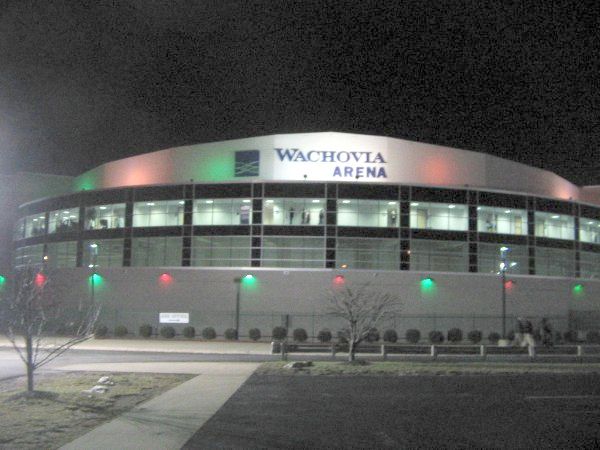 The day after Christmas found me making a return to Wilkes-Barre for a Penguins game against the Syracuse Crunch .  I had originally gone to this arena the year it opened, back in 1999.  It was then known as the First Union Arena.  As with most corporate sponsored arenas the name has obviously changed.  I was excited when it opened as at the time I lived less than an hour from Wilkes-Barre, and having gone several years without any close hockey team to support (I grew up outside Boston, so hockey was everywhere when I was younger) I figured I would get season tickets for the Pens, or at least be a regular attendee of the games.  After 1 trip to the arena back in 1999 I did not return as I was so turned off by the hassle of parking and getting in and out of the facility, a well as the "NHL feel" and high ticket prices.  I am not sure exactly what it was, but this was an arena I did not want to frequent.  With the advent of this website I knew I would have to return to get photos, and reading internet forum comments of how a Jon Mirasty vs Dennis Bonvie fight was almost a lock, I decided to make the trip.

The arena itself sits in a suburban area of Wilkes-Barre, surrounded by strip malls and chain restaurants.  They now have a direct exit off of busy Interstate 81, making parking and traffic a bit easier.  Parking in the gigantic lot surrounding the facility is free.  Today would be a lucky day for me for 2 reasons.  Reason 1-  despite having relatively high ticket prices (over $20 to sit in the upper level) I was able to score a good seat for 5 bucks.  How you ask?  As I approached the box office door a guy offered to sell me an extra ticket.  Upon finding out it was down low behind the net I declined, advising I like to sit higher up.  A second guy advised he had an extra ticket in row R.  When I asked him how much he sheepishly asked "how about 5 bucks?"  It was an offer I could not refuse, and once inside when I saw him again he said he got the tickets for free from a motorcycle dealer.  Upon entering the front doors you are on the main concourse, which runs behind the seating area and is even with the top row of the lower bowl.  There is a wide variety of concession food available, including chili, pork barbecue, and others you would not normally find at an arena.  I did not have the appetite to try anything.  The concourse is wide enough to handle the large crowds on hand, although congestion makes a trip around the arena between periods a challenging task.  The Pens have consistently been at the top for overall minor league attendance, even selling out every game for an entire season a few years ago.  That's quite an accomplishment considering they seat over 8300 for hockey.  The seating area itself is made up of a lower bowl that curves like a horseshoe on three sides, and is squared off on one end.  There is a sizeable upper level following the same pattern, and then luxury boxes above that.  The seats on the small end of the upper level are actually on temporary risers and have a bleacher type feel.  To walk behind them the concourse is amazingly narrow as you can tell these extra seats were squeezed in after the completion of the building.  The sight lines are excellent, the lighting and PA are state of the art, and the scoreboard is the best I have seen.  They have a nice video board above center ice with crystal clear pictures.  Not only that but they actually use it for replays and to show the game action, unlike a few other arenas that seemingly have the same type of board, but only use it to show commercials.  I guess you could say this place has every creature comfort that would keep fans happy.

Reason # 2 why today was my lucky day-The game itself was amazing.  Yes the Pens won easily, but there 6 fights, including a WAR between Veteran Dennis Bonvie (who is retiring this year as the all time pro hockey penalty minute leader)   and AHL rookie Jon Mirasty, who happens to be my favorite player.  You can check my blog section for a video link to the fight, but let me just say that was the best fight I have ever seen in person!  In between periods there are the usual contests and give-aways, and the chuck-a-puck contest is called a "tire toss" as they actually throw miniature tires at the target.  I guess my problem with this place is that it is way too corporate for my taste.  There seems to be too much focus on the games as a happening or social event, and not much focus on the game itself.  Sure they seemingly have lots of die hard fans who know the game, but there also seemed like a ton of people who had no idea what was going on.  With the expense of seeing a game here you would think more people would be into it.  Another pet peeve of mine is the amount of people who left early.  I dont just mean with 2 minutes to go, as I would say 20% of the crowd left at the second intermission.  Conversations I heard in my sections focused on how if they didn't leave soon they would be stuck in traffic. With 5 minutes to go the place was half empty, despite the crowd being only a couple hundred shy of a sellout.  The arena itself is an amazing modern palace, I guess to me it just lacks the old-time hockey atmosphere.  You cant argue with the success the franchise has had at filling the place however. Other information about the Wilkes-Barre Scranton Penguins is available at :  Penguins home

* Note- Some of the photos in the photo gallery were taken during a return visit to Wachovia Arena on May 9, 2009*