The Windsor area is best known in hockey circles as home of the OHL's Spitfires.  There is more hockey in the area than just the Spits though, and after taking in a 2pm OHL contest we headed 15 minutes down the road to the quiet suburb of LaSalle, and the Vollmer Centre.  The Vollmer Centre is part of the greater Vollmer Culture and Recreation Complex which sits on the edge of town in a rural park-like setting, and  features ballfields, an amphitheater, and the indoor recreation facilities which make up the Vollmer Centre, including multiple ice pads, fitness facilities, and the main arena.  The building opened in 2008, and has a modern look with stone, red and tan brick, and tan metal siding making up the exterior.  There is a sharp looking courtyard in front of the entrance featuring some benches and a large clock.  The building has several different wings, and the main arena section of the building has a wedge-shaped roofline.  A rather large raised letter sign is affixed to the side of the structure, and the place looks quite welcoming and modern.  A large electronic marquee sign near the road updates attendees on upcoming events, including future Vipers games.  We attended as the playoffs were going on, so this Sunday night matchup had a big event feel before game time.  Although the Vipers have been in town less than 10 seasons they have built up quite a following, and even claimed the Sutherland Cup in 2010.  Once inside the main arena entrance there is a large lobby which sits between the pool area and the arena itself, and tickets can be secured at the Vipers table which is set up just inside the main door.  The modern lobby is a busy place as fans stay warm before game time before deciding to head into the main arena which is rather cold inside.

Once inside the arena at the Vollmer Centre you find a nice modern arena which features a large grandstand on one side comprised of 1000 individual plastic chairs which are teal in color and arranged in 13 rows of seating.  The rake of the seating is rather steep and provides good views of the action.  The layout is a little clunky, as although there is no aisle in front of the seats near the glass (which is a good thing), there is also no aisle above the seats so you need to make sure you use the proper entry door to the arena which comes out near your seats.  Tickets for this playoff game against the Sarnia Legionnaires were only $10, and all seats were reserved.  The interior of the arena is somewhat stark, and the roof slopes downward away from the grandstand.  Ceiling beams are white, and extend across the arena under the tin roof.  There is a single scoreboard on one end, and the team benches and penalty boxes are across the ice from the stands.  There is a small pressbox in the corner and some Vipers signage in the arena as well. Folks who choose not to sit in the grandstand can stand along the end glass near the lobby and watch from there.  The Walkway in this area is actually at the top of the dasher boards, providing a great view of the action.  As you would expect in Ontario, there is protective netting covering the entire seating area.  The hallway on the concourse provides a simple, yet busy, food concession stand, and fans can get a variety of Vipers gear at the merchandise table as well.  The Vipers traditionally play on Wednesday nights here, yet a very good crowd was on hand for this Sunday evening contest.  Despite being mainly a community arena, the Vollmer Centre has a bit of a big event venue feel to it, and is a very good arena for Junior B hockey.  It also has a homey feel to it as there are various Vipers banners and signage in the arena.  There is also a rather quirky display of old fashioned stadium seats arranged on top of the entrance into the ice arena itself. We're not sure if the seats have local significance or were just put in place as a decorative touch.  Nonetheless, the Vollmer Centre bridges the gap between your everyday community rink and a true event venue rather nicely.

The game day experience and presentation at the Vollmer Centre for a Lasalle Vipers game is professional and polished, yet still has the small town feel of many Junior B markets, and that is a good thing.  A vocal crowd of Vipers fans were quick to cheer on their team and ring their cowbells throughout the game.  An active mascot named Vinny the Viper kept young fans entertained, and a chuck-a-puck contest provided some entertainment at intermission.  There was not an overload of advertisements though, and the game was clearly the main attraction here, as the knowledgeable fans enjoyed the game, which had a playoff level of intensity as you would expect.  The GOJHL is a tremendously entertaining league which we always enjoy, and LaSalle seems like a great market to host the league.  The Vollmer Centre also does its part in paying tribute to the team's history, even dating back to the franchise's days before they moved to LaSalle.  The team started in 1970 as the Windsor Royals, then became the Windsor Bulldogs, Tecumseh Bulldogs, and then the Tecumseh Chiefs before moving to LaSalle in 2008.  How to we know this?  A couple of nicely done timeline murals sit in the building spelling out the history of of the franchise for fans to see.  This a a nice touch, and coupled with the Sutherland Cup banners and other tributes to the team shows that LaSalle has graciously adopted the team as their own.  Vipers fans had tons to cheer about as the team took a 6-2 win in a game that was much closer than the score and featured a couple of late goals and a great toe to toe scrap as the playoff series moved on to another game.  Junior B hockey is always fun, and the playoffs always raise the excitement level quite a bit.  Despite being less than 10 years old the Vollmer Centre has the feel of an old time hockey barn that captures the energy of the fans, yet has modern amenities and is a comfortable, rather quirky place to enjoy hockey.  Vipers fans seem to agree as team support is very good.  The Spitfires will continue to get the majority of attention in the Windsor area, and rightfully so, but there is also a great hockey option in nearby LaSalle. 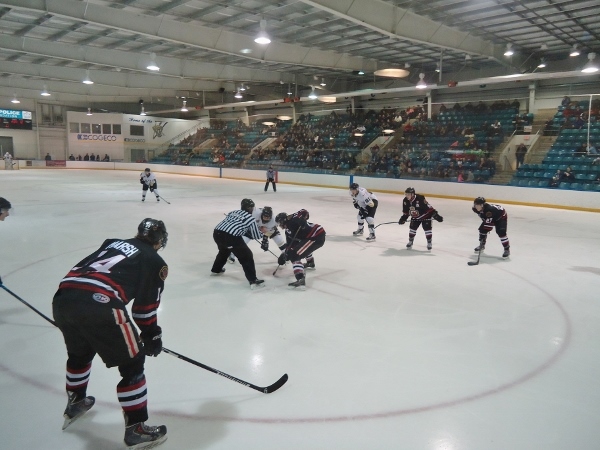 Other information about the LaSalle Vipers can be found at:  Vipers Home

More photos of the Vollmer Centre can be found  Here