A mid December trip to visit family in the Boston area found me travelling north to the Granite State to catch some AHL action in Manchester.  I was looking forward to seeing a game here as I had always heard how great Manchester has drawn for the Monarchs games since opening in 2001.  The arena sits a couple blocks from the Merrimack River, and is a good example of a newer arena built to accomodate AHL hockey.  The arena holds approximately 10,000 for hockey, and was frequently filling the place in the early years of the Monarchs' existance.  It occupies an entire city block, and has a rather odd appearance, with a modern looking glassed in lobby and entryway, a brick exterior, and then a weird looking metal structure which makes up the upper walls and roof.  The top of the exterior is also a  less than appealing teal color.  Overall the downtown area seems nice, and there is parking in nearby lots and garages, although it seemed a bit pricey.  We walked in to the box office area and secured greats seats at the top of the lower bowl right on the red line, although they were a bit pricey at $22 apiece.  The process for entering the building is not very friendly as I was subject to a pat-down search before being allowed to enter.  I have only had this happen one other time, that being at the Richmond Coliseum in Virginia.

Similar to the arena in Lowell, who also happened to be the Monarchs opponent for this game, once having your ticket scanned you can go up a staircase on either side of the lobby to get to the main concourse.  There is a very good team merchandise store which occupies the lower level just inside the entryway, and the store is open during the day, not just while the games are going on.  The concourse is modern and wide enough, except for where the concourse circles above the lobby.  There it is barely wide enough for two people to pass each other.  There are the usual concessions throughout the concourse.  The neat thing about this place is the seating bowl configuration, which has a lower bowl circling the ice, and seperate upper levels, including 2 levels of luxury boxes on the sides, 1 level of suites on the end, and a upper seating area on the sides, which extends higher than the seats on the ends.  It truly looks like a mini NHL arena, and all the seats seem to offer a good view.  Most annoying however are the white nets which hang behind each goal and extend up to the rafters.  Their white color traps the reflection of the lights, and makes them stick out like a Russian in a line brawl.  They do obscure the viewing from the end seats, if only for their distraction factor.  The seats are an odd tan color, and I am not sure the reasoning for that.  Overall the arena has all the creature comforts you could need and is quite comfortable.

I was looking forward to a big time atmosphere since the Monarchs had been in the top 5 in minor league attendance quite a bit over the last 10 years.  Sadly this game saw a smallish crowd of  5300.  Even though 5000 people is a decent crowd for the AHL, it was nowhere near what the team used to draw, and the crowd was quiet at that.  I also figured since their opponent Lowell is only about 35 minutes away that that would attract some interest, but it did not.  The lack of crowd response made the arena feel a little too sterile, and too much like many of the other newer arena around North America.  They do a great job in Manchester with the intermission promotions however, as there is always something going on.   Although Battle Bots is so 2001 they had robot races during the first intermission, and they were entertaining.  They also had a very large inflatable lion head for the players to skate out onto the ice through during intros, and they even had the most powerful t-shirt cannon I have ever seen, with some shirts ending up in the upper level.  Sadly the intermission fun was about the best part of the game, as there wasn't much action on the ice or in the crowd, as Lowell took a 3-2 win in a game which featured not much physical play, and saw NHL and former Lewiston MAINEiacs goalie Jonathan Bernier get pulled by the Monarchs coach after giving up early goals.

Overall the Verizon Wireless Arena is a nice enough newer arena, and its upper and lower level seating arrangement makes it seem like a big time arena.  Aside from the annoying nets hanging from the ceiling this place also offers about a good a view as any 10,000 seater could.  This game, and the crowd on hand, just did not live up to expectations.  The UNH Wildcats do usually play a couple games here each year, so that is another option for hockey fans to take in a game here.  With a packed house this place would be a lot of fun. 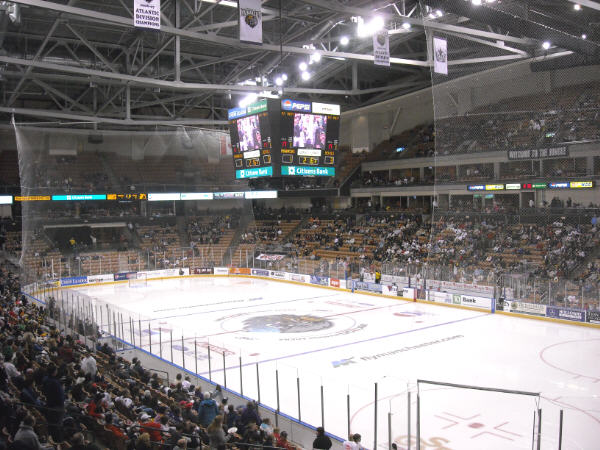 Other information about the Manchester Monarchs is available at:  Monarchs Home

Other information about Verizon Wireless Arena is available at:  Arena Home