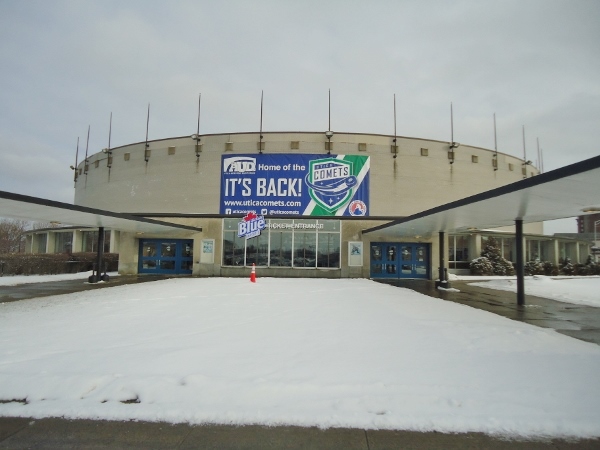 Sitting between Albany and Syracuse, on the banks of the Mohawk River, is the blue collar city of Utica.  The Utica Memorial Auditorium, known best as "The Aud", opened in 1960, and has been the home of hockey in the Mohawk Valley since the early 1970's, when the Mohawk Valley Comets of the old NAHL called the Aud home.  This gritty town has seen its share of franchises come and go, including the AHL's Utica Devils, and later several Colonial League and UHL franchises.  Pro hockey left Utica in 2002, but the fans did not.  The hockey starved fans in Utica turned to the local Division 3 Utica College as their team, and supported the college with crowds rivaling nearly half of the Division 1 schools in the country.  Pro hockey returned to Utica this year, with a new version of the Comets, Vancouver's AHL affiliate.  The Utica College Pioneers still draw large crowds to the Aud, but the fans have also returned in droves to support the Comets.  The Aud is a unique looking building, having a concrete circular shape.  It may remind you of Madison Square Garden, both inside and out, but was actually built before the new Garden and is likely an architectural inspiration for it.  The building has a classic look that can instantly be identified as an arena, and signs on the building's exterior announce the presence of both the Comets, and the Utica College Pioneers.  A simple electronic marquee sign also sits near the road announcing future events at the arena.  There is a small parking lot on the arena grounds, and a pair of covered walkways leading to the arena.  The box office entrance is closer to the main thoroughfare of Oriskany Street.  From the outside you can tell that you are in for a throwback experience when attending a game in Utica.  We secured a ticket for this New Years Day afternoon contest against the Lake Erie Monsters for $14 as they were having a "$14 for '14"  New Years Special.

The box office itself is covered in advertisements for a local car dealer, but once inside, and onto the arena concourse itself, you can see that the Aud maintains the general appearance of its original form from the 1960's.  A wide circular concourse runs around the arena, and stops on one end where there is a stage, similar to the arenas in Syracuse and Baltimore.  The concourse has windows looking out onto the street on most of it, and the pale colored tile floors of the concourse may not be original, but look to be from the period of the arena.  There is a team store next to the box office.  This being a memorial building there are a few war memorial plaques on the concourse, as well as some framed newspaper clippings announcing the opening of the Aud back in 1960.  In keeping with local history, the concession stands sport a retro look with murals of local history covering the walls of the various stands, including tributes to local companies such as Utica Club and others.  Once inside the seating bowl itself fans of hockey and cinema may say to yourself "this looks familiar".  That is because the Utica Aud was used in the movie Slap Shot as the home of the Peterborough Patriots.  The high circular ceiling is the focal point, and just like at Madison Square Garden, there are a series of steel cables supporting the ceiling which all extend from the center of the building similar to spokes on a wheel.  Red and blue plastic seats extend around the ice in a u-shape as there is no seating on the stage end of the ice.  The seating comes to its highest point at center ice on each side, extending to almost the ceiling, and is lower on the end of the rink.  The pitch of the seats is not overly steep, and there is an aisleway to access your seat about a third of the way up the seating rows.  There are 6 rows of seats below the aisle, and varying amounts of seats above the aisle depending on which section you are in.  The arena certainly has character, and provides a glimpse of the way hockey was enjoyed in the 1960's and 70's.  There are no luxury suites here, and the 4,000 capacity, which is small for the AHL, assures that most of the seats will be full.  A simple center scoreclock hangs at the hub of the steel cables.  There are 2 nice video boards, one on each side of the stage, adding a modern touch to an otherwise less than modern arena experience.  Offsetting the modern aspect of the video boards are banners for retired players from the first incarnation of the Comets.  With the arrival of the Vancouver affiliated team the interior walls were painted blue and green, and honestly seem a bit out of place with the red and blue seating.

The gameday experience at Utica Memorial Auditorium top notch.  The game takes the top billing, but there are intermission contests and entertainment, such as chuck-a-puck and pee-wee hockey.  There is a fair amount of advertising banter thrown in to the presentation during stoppages, but that is unavoidable in the modern day AHL.  What makes the vibe of the building so great is a combination of the enthusiastic fans and the setting of the arena itself.  A couple rowdy locals carry on the Vancouver Canucks tradition of the Green Men with the full costume and appropriate seats next to the visitors penalty box in order to heckle opponents.  The fans are into the game, vocal, and knowledgeable.  They have really taken to the first year team, and seem to already have accepted the Comets into the community.  We had been looking forward to a visit to the Utica Aud for a long time and figured we would take in a Utica College game when time permitted, but had never imagined that the AHL, a league we honestly though had outgrown the classic small market towns like Utica, would ever make a return.  The Comets do share top billing with the Pioneers though, and there seem to be enough hockey fans to support both programs.  There are some quirks, which could be considered flaws were it not for the classic atmosphere at the Aud.  The end seats, unless you are in the first few rows, offer an obstructed view of the action.  Some of the seats on the end are at a vantage point that you cannot see the goal line which is closest to you.  The seating also does not seem steep enough to offer an ideal view.  The concession lines are extremely slow, and move at a crawl even during play.  Still, being able to enjoy a big time AHL game in the tiny confines of the Aud, all while reciting Slap Shot quotes in your head, makes for a truly fun experience.  The game itself was old time hockey as well, including a brawl in the second period.  A crowd of over 3500 was there to cheer and have a good time on this afternoon.  The struggling Comets were able to allow their fans to continue the New Years party as they took a 3-2 win over Lake Erie.  We left Utica Memorial Auditorium thinking that was a great way to start the year, yet a perfect opportunity to step back a few years on the calendar and watch some old time hockey in a building overflowing with history and character.  The AHL is back in Utica, but the hockey fans have been in the Mohawk Valley all along. Other information about the Utica Comets can be found at:  Comets Home

Other information about Utica Memorial Auditorium can be found at:  Arena Home

More photos of Utica Memorial Auditorium can be found  Here