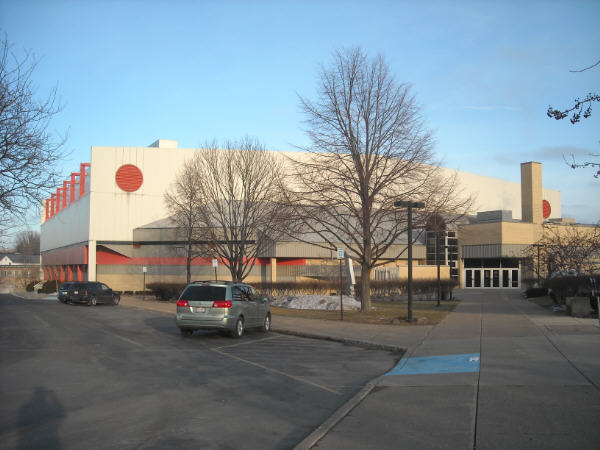 Despite the fact that Erie is in my home state, and the fact that I love OHL hockey, I hadn't made it to Erie for a game until this visit. The city of Erie is lucky indeed to have such a fun level of hockey within the confines of Tullio Arena, and the fans in Erie really support their team.  The Arena sits on the edge of downtown, and is part of the Erie Civic Center Complex, which also encompasses the adjacent minor league baseball stadium.   The arena opened in 1983, and is a no frills, throwback of a building which true hockey fans delight in.  The box office sits in a nice lobby area which is adorned with Erie sports memoribilia, and the lobby has a set of glass doors which you can look through directly into the seating area and ice surface.  The grounds are nicely kept with some landscaping in front.  Looking at the building from the outside there is little doubt this place is an arena, although the exterior does look a bit dated in that 1980's sort of way.   Perhaps the best part about the fan experience in Erie is the low cost of tickets as for $11.50 I got a seat up high on the side of the rink.

Once inside you definitely feel like you are in an older arena, but if you read my site much you know that is not a bad thing.  The design is basic, with 2 very large grandstands on the sides of the ice.  The end of the rink near the lobby has a smaller grandstand.  There is no corner seating whatsoever, and the seats at the ends of the sections are not angled at all, meaning you will have to turn your neck to see the action.  The other end of the rink is devoid of seating, although the end wall has about 5 luxury suite rooms, which appear basic at best, and have sliding glass doors like you might find on your aunt's back patio.  There is a center ice scoreclock and video board.  The oddest thing I noted was that there are 2 seperate zamboni doors, 1 behind the net near the luxury seating, and the other in the corner of the opposite end.  They use 2 zambonis like just about every other rink these days, but I cannot remember ever seeing them use 2 completely seperate entrances to enter and exit the ice.  The protective netting in front of the end grandstand is just a flat piece of netting and does not wrap around into the corners at all.  I am not sure why I like that,  but I do.  I guess I just have an aversion to many of the newer arenas which try to make the corner areas "too safe" for the fans.  Underneath the stands is a concourse which dead ends at the far wall, making a u-turn necessary after getting your concessions.  There are a couple of souvenir tables set up on the concourse, both of which were well stocked.  The concrete walls, and rather run down look of the concourse further reinforces that fact that you are in an older barn.  The concourse opens up a little near the main entrance doors, where it overlooks the end seating, although it gets log jammed there as they have jersey raffle and promotional tables blocking the aisles.  The food concessions are basic, and the rest rooms get a little crowded during intermission.

The lack of amenities are made up for in the game presentation and atmosphere. What was the best part about the atmosphere?  It was packed, that is what.  It is always fun to take in a game when the place is full, whether that be in a barn that holds 2,000 people, or a giant arena holding 12,000.  Tullio arena holds over 5500, and there was a sellout crowd on hand.  I have heard legendary stories about how loud and raucous this place is, and the fact that it is very imposing for visiting teams to play here, but honestly I didn't think the crowd was all that enthusiastic.  The Otters took and early lead, and the crowd did cheer at the appropriate times, but they became quiet when Ottawa staged a big comeback, taking the 6-4 win.   Still, in talking with a couple local Otters fans, and from reading about the place on various hockey forums I will give them the benefit of the doubt that the place usually gets loud.  Unfortunately on this night the loudest the fans got was during the t-shirt toss at intermission.  Still the atmosphere is very fun, and it is possible that I got "over psyched" to experience the legendary crowd that my high expectations may have caused a  letdown.  Nonetheless Tullio is a great place to watch a game without being bombarded by advertisements, and being able to enjoy a high level of hockey in an old-school atmosphere.

I must comment on the rather nebulous camera policy put in place by Tullio Arena, or the Otters, or both.  It has been posted on several forums that fans should not even think about trying to snap a picture during the games, and of having ushers immediately rush to put a stop to it.  I even asked an usher if I could snap a quick photo of the zamboni, and he gave the OK, but said to be quick.  It seems the team has a strict no photos policy, yet there are no signs about this that I noticed in the arena, and nothing on the ticket stub stating that photography is prohibited (this is your contract with the arena afterall).  The PA announcer did make 1 announcement during the game that "flash photography is prohibited", which is common and understandable, and I don't use a flash anyway.  Either way be prepared for a hassle if you try to take photos during the game as an email from the team PR guy and announcer which was sent to me let me know that this was specifically prohibited.  I didn't receive this email until after the game, but am thankful that I am not guilty of breaking their rule.  In fact I am very happy that I was able to get these photos (all of which were from the same game I was at, and have the same point of view which I saw the game through).  It's OK though as I know the photographer well (very well), and he said it is fine for me to use them on my site (wink!).   If you have a chance to catch an Otters game you should do it.  The place is a lot of fun.  There will likely be a large crowd on hand, and the old-school building has enough charm to make you feel like you are experiencing hockey from 20 years ago.  The tickets are cheap too! Other information about the Erie Otters is available at:  Otters home

Other information about Louis J. Tullio Arena is available at:  Arena home