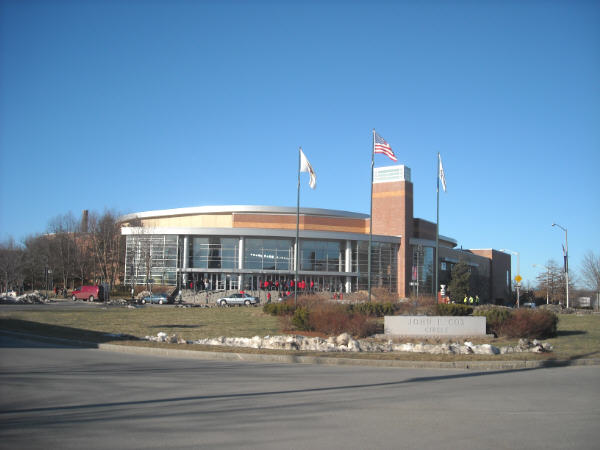 The former textile mecca of Lowell, about 25 miles north of Boston, has an amazing arena which opened in 1998.  Unfortunately not too many people seem to be interested in hockey in the area however (minor league hockey at least as the building is shared by U-Mass Lowell hockey and the AHL's Devils), as for the last several years Lowell has been in the basement as far as AHL attendance goes.  I first visited this place the season the Lock Monsters (the original AHL team to reside at Tsongas Arena) started playing, and the team was reasonably well supported by the fans.  Sadly the Devils are almost always playing to an empty house.  Don't let that stop you as the arena design is very good, almost ideal in fact, for this level of hockey.  The arena sits in downtown Lowell, and there is parking in nearby lots and a parking garage across the street.  The arena is named for former Massachusetts Senator and Lowell native Paul Tsongas.  The front of the building has a large glass facade on the front, and a nicely kept exterior.  Once you go up the stairs you are in the main lobby area and the box office windows are directly in front of you.  The lobby is rather large, and fans wait there for the gates to open.  There is a team store on the lower level.  In order to access the seating bowl you go up a set of stairs on either side of the lobby.  The tickets at $19 apiece seem a bit overpriced to me as they should be offering low priced ticket to get fans in the building.  The low attendance is a catch 22 however as if they had different price levels everyone would buy the cheap seats and sit where they wanted to anyway.  There are reports out that the parent New Jersey Devils could care less about attendance as they have a great lease on the building with the city of Lowell, so they don't make much effort to attract new fans or lower pricing in order to spur fan support.

Once you get to the top of the stairs and get to the seating bowl itself you are met by a very efficient and fan friendly design.  There is an open concourse all the way around the top of the seating area.  The ice is circled with seats all the way around, and the capacity of 6500 is ideal for the AHL level in my opinion.  There really isn't a bad seat in the house, and the fact that the concourse is open means if you need to get up for concessions you won't much much of the action.  There are the usual food vendors, although due to the low attendance some of the vending stands which were open when I first visited the arena now sit dormant.  I am an old school arena guy, but I really like the design of this newer building.  The rake of the seats is steep enough, and  the blue and green plastic seats are sufficiently comfortable.  I also like the fact that there are basically no luxury suites or boxes.  I have never been a fan of them.  (I know, I know, they are a great revenue generator for the teams and arenas.)   There is one section of what look to be luxury boxes at the top of the seating bowl behind the penalty boxes, and that is it.  They are separated from the concourse by opaque glass bricks.  There is a center ice scoreclock, but no video board, which to me is no big deal.

The game presentation itself is the usual minor league schtick.   The PA announcer is VERY  annoying however, and is the same guy from the Lock Monster days.  He announces home goals and assists very enthusiastically, and  throws in a Ric Flair "Woo!" at the end of each announcement.  When announcing visiting team goals or home penalties he uses a frustrated tone of voice and sounds disinterested.  I guess this is not a big deal, but the fact that I remember the same routine from my last visit here about 3 years ago makes me realize that the locals likely get really annoyed by it (then again maybe not).  As noted the views are great, and they have the blimp flying around during intermission.  They did have everyone stand up during the media timeout in the third period and had a young girl sing "God Bless America".  I am not sure if this is done every game, but it seemed like their version of the 7th inning stretch and "Take Me out To The Ballgame."   If this building was packed it would be an awesome place  to watch a game.  As it was however the announced attendance of 2500 for this Sunday afternoon game was actually about a thousand people, so it is hard to get a great atmosphere going when the place is that empty.  I will give credit to the fans there though as they did cheer vigorously during Lowell's late comeback which saw them get 2 extra attacker goals after giving up an empty-netter to tie the game and go to a shootout.  The game itself was a blast as Portland took a 7-6 shootout win, and with 3 goals scored in the last minute of regulation it was exciting.  That was about as much fun as you will have at a game without a fight.

I do have 2 other criticisms.  First the arena ushers do a terrible job of keeping people from standing up during play.  I realize that the ease of getting the the concessions with the open concourse will make more people get up during the middle of a period, but there is no attempt made whatsoever to stop people form standing or going up and down the aisles while play is going on.  There were none of the "show courtesy to your fellow fan by waiting until a stoppage in play to leave your seat" announcements, and many of the fans there for this game had no sense of courtesy.  We finally moved our seats simply because the family in front of us had to get up 3 times a period for snacks, souvenirs, etc.  I finally had to say something to them, and they seemed somewhat confused that they were bothering patrons around them.  I said to my wife though that they would likely leave before the end of the game (predictable isn't it?).  Sure enough with about 8 minutes left I looked across to our old seats and Mom, Dad, and kids were getting up, putting on their jackets, and moseying up the aisle all while play was going on.  It wasn't just this family though, I saw more movement during play at this arena than any other I can remember.  I realize people at any venue will be either clueless, or inconsiderate, but I do hold the staff partly responsible as if no announcements are made, and no enforcement is done then the problem will continue, even if it is different people doing it every game.

The second complaint is that the championship banners for U. Lowell hockey's Division 2 titles are a complete joke.  I think it is great that the school wants to recognize this accomplishment, and even though the teams played at their old rink, the Joe Tully Forum, they have decided to display the honor for all to see.  My problem is that at the time they won the championships the school was know as U. Lowell, not U-Mass Lowell, and the team was known as the Chiefs, complete with the Indian head logo and all.  I used to attend U. Lowell games regularly, and remember the controversy about renaming the team to the  River Hawks for political correctness reasons.  The problem you have now is that there are banners hanging prominently on display saying that the U-Mass Lowell Riverhawks won 2 championships, complete with the hawk logo, when in fact that team never existed when the championships were won.  I am sure the school would feel they are offending people if they put the Chiefs logo on a banner.  In fact they are offending me by trying to rewrite history.   These days places like Binghamton have retired numbers and banners from their prior franchises, but they actually recognize those franchises, not try to change the names.   Overall the Tsongas Arena is among my favorites as far as design and fan comfort.  I love the open concourse.  I hope another franchise takes over to keep minor league hockey alive in Lowell, as if the place was full, and with a few minor tweaks in the way they handle things this place would be among the best. 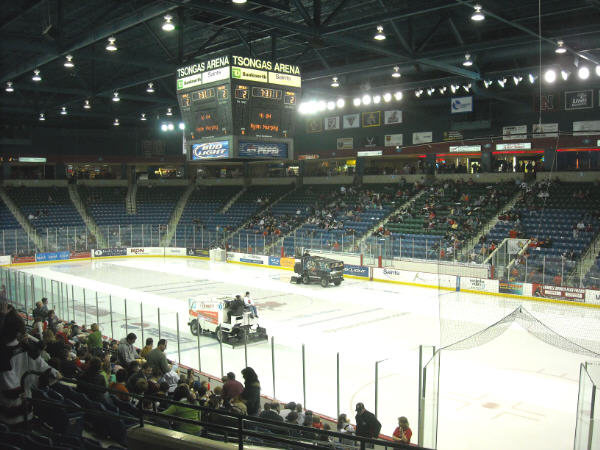 Other information about the Lowell Devils is available at:  Devils Home

Other information about Tsongas Arena is available at:  Arena home