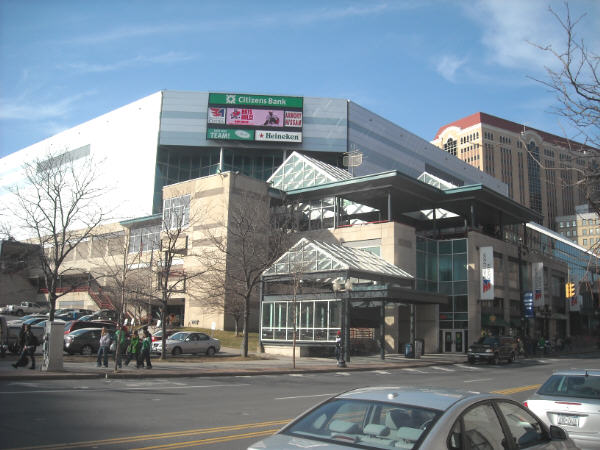 I eyed the 5pm start for this saturday game and made it a point to make the 4 hour drive to Albany for this game as it meant a reasonable return time.  I wasn't sure why the game would start at 5, but when I arrived in town about an hour before game time I noted that the city's St. Patrick's Day parade was just wrapping up, and figured the arena wanted to take advantage of the extra people which were in the city anyway.  This arena, which opened in 1990, sits in the center of Albany, only steps away from the state capitol and government offices.    This large building does fit in nicely with its surroundings, and even has some restaurants and other businesses which occupy space in the building, which has various storefronts along the street.  There are multiple parking garages nearby.  The arena has had several names, including Knickerbocker Arena, and Pepsi, and now dons the name of the local newspaper.   The main entrance area is sort of a courtyard, with a roof, but an open air feel and various staircases and escalators to get to the entrance, which is up 1 level from the street.  The building does look a bit worn despite being less than 20 years old, and none of the escalators were operational on the day of my visit.  The box office is on the ground floor and the ticket to today's game against the Philadelphia Phantoms set me back $17.

Once inside there is a sufficiently wide concourse and a number of food vendors, however many of the concession stands were closed for this game.  There are 2 merchandise tables set up on the concourse, and there is also a decent team store which is located on the street level and accessible without going into the arena itself.  Once inside the seating area you immediately notice how large the building is, as the place holds 6500 in its current configuration with the upper level closed off with curtains, ala the Philly Spectrum and DCU Center in Worcester, but could easily hold twice that many if the upper deck were open.  There are a series of luxury boxes around the top of the lower seating bowl, and they are all enclosed with glassed in windows, although it appears the windows do slide open.  Behind one goal there is a restaurant/ bar which you can also view the action from.  There is also a section at ice level on one end where there are tables and chairs for additional high end seating of some sort.  The seats in the main bowl are all navy blue and have padding, although they do appear worn and a little tired.  Except for the luxury seating options, all seats are the same price.  The sight lines are good, and the seating is steep enough, at least near the top of the seating bowl, to offer a good view.  Basically the place fits the mold of an older arena (in fact it seems more like the arenas of the 80's, than one opening in 1990).  Due to the lack of concessions open there were long lines, but there was a good crowd on hand at over 5200 people.  There is a worn out video board above center ice, and the PA announcer and roaming crowd announcer must have been OK as I don't remember either being particularly annoying.  The curtains blocking off the upper level seats does not extend to the area at center ice on one side, as that area is used for the press and media seating.  I also did see a few people sitting in the front row of the upper level, and they appeared to be able to do so without a hassle from security.

The game presentation was fun, although the give-away promotion was kind of a dud.  This game was billed as "world record night", and each fan was given a whoopie cushion (yes I said whoopie cushion) upon entry, and they tried to break the simultaneous whoopie cushion record  during the second intermission.  Despite a decent participation the noise was not that loud, as the sound was sucked up in the cavernous space below the high ceiling of the building.  There was a bounce house and arcade games on the concourse for the kids, and the do a decent job of offering entertainment for the fans.  The game itself was good as well with a decent buckets-off scrap, and Philly taking a 5-4 win.  Although I am generally not a fan of larger arenas, and I am even less a fan of putting up curtains or blocking off certain sections to make the building appear full, for some reason the curtain thing worked better for me at Albany than it has at other places.  I guess I had a good time because although the crowd was not overly loud they did seem to be into the game, and the lower bowl was crowded enough that it didn't feel as though you were in a giant arena, except for the high ceiling.  The place could definitely use some maintenance or upgrades, but the overall experience of watching a game here is an enjoyable one. 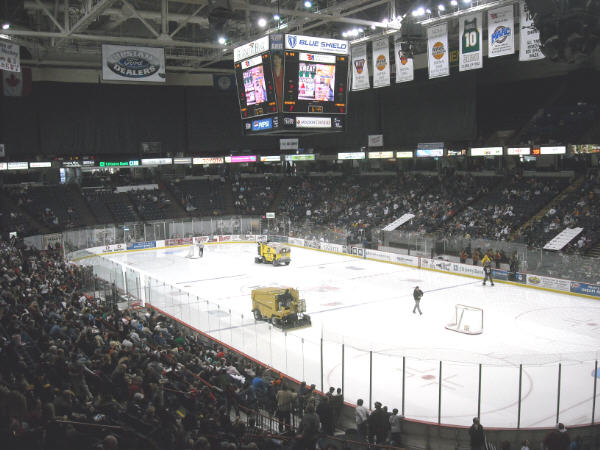 Other information about the Albany River Rats is available at:  River Rats Home

Other information about the Times Union Center is available at:  Arena Home

More photos of the Times Union Center are available Here