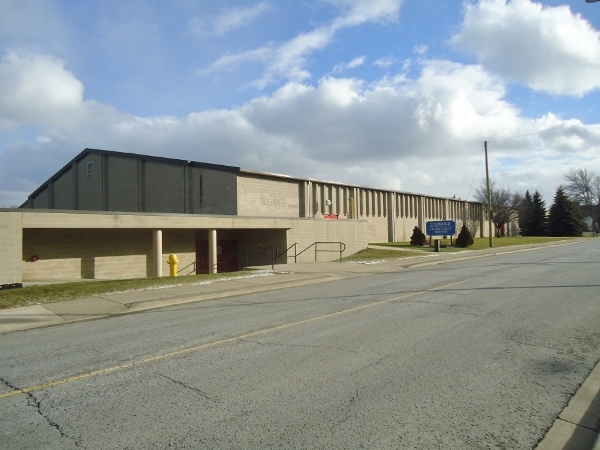 Every town has one.  You know, the place with the run down looking exterior, small sign and overall look that says "I'm not going in there to eat", yet ends up being a place locals rave about and a place where those who dare to enter will find amazing home cooked food, and a sense of tradition that has been in place for years.  If the world of hockey were the world of restaurants then Thorold Community Arena would be "that place".  Located on the edge of downtown, not far from the Welland Canal, Thorold Community Arena sits built into a hillside, with its bleak looking cinder block exterior which is completely devoid of windows, and highlighted by graffiti on some parts of the building, looking more like an industrial building than a hockey arena.  Once you get inside though, you see an amazingly well preserved and well laid out example of what a hockey arena should be.  A small parking lot sits on the slope on the downhill side of the building, and an even smaller lot sits on the end of the building.  The complex is actually made up of 2 arenas.  James Whyte Arena opened in 1936 and is a classic example of a pre-war arena, but is essentially a practice and community rink as it has virtually no seating.  Attached to the old arena via a lobby and hallway is Frank Doherty Arena which opened in 1974 and has been home of Junior B hockey in Thorold ever since.  The early Junior B teams were actually called the Paper Bees, paying tribute to the paper mill industry in this blue collar town.  The arena is most known by the Thorold Community Arena name, rather than the names of the 2 individual arenas inside the complex.  This building is not going to win any awards for exterior aesthetics, but attending a game here is a lot of fun and a great experience, and what it lacks on the outside gets offset by the classic styling on the inside.

There are entrances to the arena through both the uphill and lower sides of the building, and there is nondescript signage on both sides as well.  You enter into a lobby and hallway that also contains the concession stand as well as a very well done local sports hall of fame known as the Thorold Runway of Recognition.  The lobby itself features a wooden ceiling and wooden beams, as well as windows overlooking the end of the main arena.  A ticket for tonight's game between the Blackhawks and the Port Colborne Pirates cost a mere $8.  Once you enter the main arena you are hit by the cold as this place is kept very cold, like all good arenas should be.  The seating is very colorful and made of of old style wooden 2-seat benches which fold down and make the arena feel older than the 1970's vintage that it indeed is.  Everything is spotlessly maintained and the huge wood beams which make up the roof trusses, as well as the wooden ceiling seem out of place when you consider the concrete block exterior of the building, but the overall look of the inside of the arena screams "old school".  The uphill side of the building has 5 rows of the wooden seats, and the lower side of the building has the seating extending higher, a full 10 rows in all.  Capacity is listed at 1755, although playoff crowds exceeding 2100 have been reported.  There is a narrow aisle atop each grandstand, also offering additional standing room.  There are support beams above the seating which do block the view from some standing spots, but all in all the sight lines at this old barn are very good.  An old style pressbox is accessible from a narrow, steep stairway on the concourse on the side with 5 rows of seating.  The penalty boxes are on that side, whereas the team benches are in front of the larger grandstand.  Various banners adorn the end wall away from the lobby, and the lone scoreboard is affixed to that wall as well, with a large plexi-glass cover attached to it.  Various retired number banners are on the walls, and the team has NHL alumni including Owen Nolan and goalie Dwayne Roloson.  The wall near the lobby features a large Blackhawks logo as well.  Thorold Community Arena is the kind of arena you picture when you think of  blue collar style Junior B hockey.

Thursday night is hockey night in Thorold, and the game day experience is fun yet low-key.  Start time for the games is not 7:00, nor 7:30, but rather 7:07.  Watching the action from the old wooden bench seats is not an experience many hockey fans get to take part in anymore with the plethora of new community arenas springing up across North America.  The game presentation is basic, but does feature a chuck-a-puck contest referred to as the "puck toss", and there are even cheerleaders in Thorold who stand in the aisles during stoppages and do quick cheers.  Most of the folks are here for the game though, and the fans spread out and even stand behind the near end glass to watch from ice level.  The PA system is muffled and echoes inside the arena and an old school fire siren is used in place of a goal horn.  The crowd of only 400 enjoyed hockey on this windy winter evening with the Blackhawks much like fans in the 1970's would have enjoyed the Paper Bees action.  Little in the building would have been different back then.  The crowd was rather subdued, but there was not a lot for them to cheer about on this night.  The Blackhawks lost 7-4 to the Pirates, but we were glad that we didn't look at the dull exterior of the arena and drive right by.  There have been articles in the Thorold news indicating many in the area wants a modern arena and think that Thorold Community Arena has outlived its use, but in our opinion what is inside the gray cinder block walls is a gem of an arena that would certainly be appreciated by hockey purists and historians alike. Other information about the Thorold Blackhawks can be found at:  Blackhawks Home

Other information about Thorold Community Arena can be found at:  Arena Home

More photos of Thorold Community Arena can be found  Here