The Ice Mine - Home of the Keystone Ice Miners 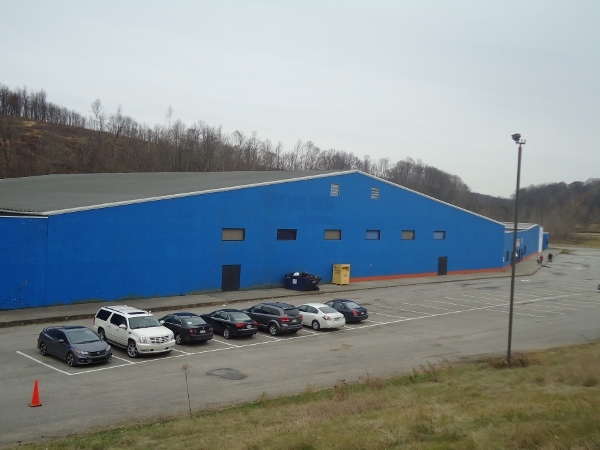 When we heard that the NAHL was coming to Connellsville, PA we had to break out the map.  You see, towns of 7500 don't generally host big-time junior hockey in the U.S.  Small towns across Canada, however, are filled with Junior A and Junior B programs that pack the stands in small communities on a nightly basis.  The thought of a similar arrangement in our home state became immediately appealing.  Connellsville is a blue collar town about an hour Southeast of Pittsburgh.  This is not exactly a huge hockey area as football is king around these parts.  The Ice Mine sits about 3 miles outside of town on a residential road, and is a giant blue cinder block building which opened in 1995.  The arena has a parking lot out front and sits at the bottom of a grassy hill.  The stark exterior features a small sign bearing the arena name at the main entrance.  The building certainly looks big, as there is a roller rink and gym in addition to the ice pad at the facility.  Aside from a few windows the exterior is all blue except for an orange accent stripe which runs across the bottom of the exterior wall.  The Ice Mine seems like an unlikely home for a franchise in a league like the NAHL, but that small town feel and basic structure add to the charm of watching a game here.  This isn't the Consol Energy Center, and it doesn't try to be.  Word is that the arena had fallen on hard times in the last couple of years, and is actually in receivership and owned by the bank.  The relocation of a NAHL team here from Port Huron was part of the plan to get the arena back into a profitable state.  We like the idea of a team in a small town like this, as it should get more attention than if it were in a more suburban area or bigger population center, and gives locals the opportunity to watch quality hockey at an affordable price. Tickets for this Sunday afternoon matchup against the Soo Eagles were $10, and being Sunday during football season we expected a small crowd to be on hand.

Once inside the main entrance of The Ice Mine you find yourself in the large lobby area.  Like many community arenas there are a number of tables set up and a well stocked and fairly priced snackbar window on the end wall, offering everything from burgers and dogs to breakfast food.  A few arcade games line the far wall of the lobby, and  flyers for upcoming events, including professional wrestling and upcoming Ice Miners games, line the wall,  To access the arena you enter through a set of doors and are on the open space at the end of the rink that serves as the concourse.  A simple ticket table is set up, and beyond that are a series of other tables from various vendors including the booster club, an Ice Miners merchandise table and various community groups who were present on this "Faith and Family" afternoon promotion.  The arena features a fairly high ceiling and has seating on both sides of the arena.  The far side of the arena finds the team benches and has 12 rows of wooden bleachers which are painted green and yellow.  The near side of the arena has seating laid out a little differently, with red and blue bleachers set up at a steeper angle and featuring only 10 rows.  The sight lines on this side are better, and the pressbox is on the near side as well, although the PA speakers are set up at the top of the grandstand and are cranked up to a very loud level, so sitting on this side may make for an ear splitting event.  A single scoreclock is on the end wall, and the high ceiling is held up by metal support rafters.  Both the rafters and ceiling panels are white and seem to brighten the place up a bit.  Windows on the end walls are covered by curtains.  The Ice Mine has a very small town feel to it even on the inside, and the listed capacity of 4,000 is likely not accurate, but with fans standing along the end glass near the concourse, and the stands full you could squeeze quite a crowd in here.  The glass above the dasher boards is very low, another old-school touch which we like.  There are  no luxury suites or fancy amenities here, and if there were it just wouldn't feel right.  The Ice Mine is the proper type of facility to enjoy this type of hockey in a working class community.  The temperature is kept very cold inside, which again is similar to a small town Ontario Junior A arena.

The gameday presentation at The Ice Mine can be best described in one word - "Fun".  Nearly every aspect of the presentation seemed appropriate for the setting.  Country music is played among the songs over the PA during intermission.  A t-shirt toss at intermission and puck drop before the game by a local Pastor on this Faith and Family day game all just seemed to work here.  There is also a chuck-a-puck contest, which featured the Benny Hill theme song played over the PA while the pucks were tossed at the target.  This place has a homey feel, and despite being a new franchise to a place not overly familiar with junior hockey there seemed to be quite a few fans sporting the orange and blue colors of the Ice Miners.  The "lets go Miners" chant broke out on more than one occasion, and although the crowd of 750 or so didn't come close to filling the building everyone on hand seemed to be there to have a good time and support the hardworking players who were on the ice.  While most folks in Western Pennsylvania spend their Sunday afternoon watching the NFL, those that chose to come out to The Ice Mine certainly enjoyed themselves.  There is not a lot of tradition built up here with the team being new to the area, but they did try to build up and maintain a little of the franchise's history with banners from the Port Huron Falcons on the walls.  We're not sure if many folks will catch the significance of this, but we applaud the effort of trying to keep the team history and identity alive.  The game itself was fantastic, with lots of action, hardly any penalties, and a dramatic finish which saw the Ice Miners lose a 3-2 decision in a shootout.  We greatly enjoyed our stop in Connellsville to check out the Ice Miners.  This arena is certainly not the newest, nicest, or most well kept facility in hockey, but we appreciate that what was presented to the fans was genuine and full of effort, and that the facility does not try to pretend to be something it is not.  The Ice Mine is simply a great place for small town fans to enjoy a high quality hockey game at a decent price, hang out with the locals, and support the hardworking players on the team.  This formula works in countless small markets across Canada, we hope it works here too.   We are uncertain of the long term future of the hockey here, but think anyone in the area should give the Ice Miners a try. 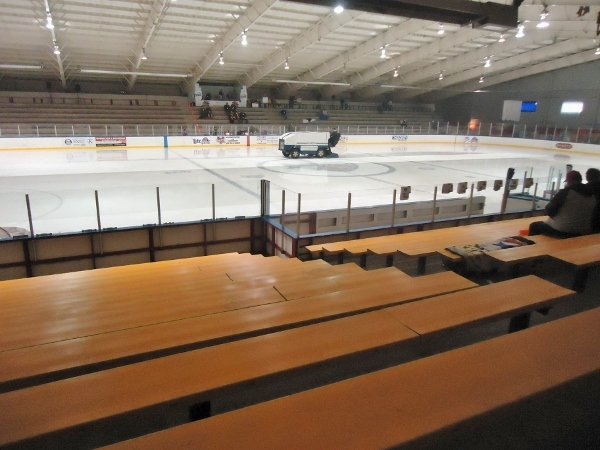 Other information about the Keystone Ice Miners can be found at:  Ice Miners Home

Other information about The Ice Mine can be found at:  Arena Home

More photos of The Ice Mine can be found  Here