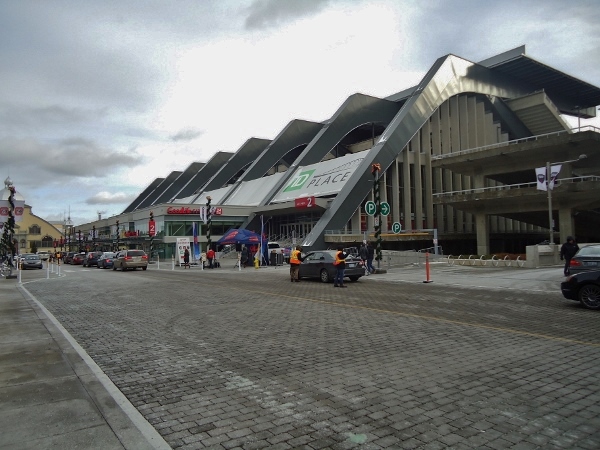 In December of 1967 the Ottawa Civic Centre opened in Lansdowne Park with an exhibition game featuring the Ottawa 67's against the NHL's Montreal Canadians.  Fast forward to 1992 and the NHL would call this venue home as the Ottawa Senators joined the NHL.  The history of TD Place Arena, then known as the Civic Centre, is one of various high level hockey teams, with the OHL's 67's being the mainstay tenant, and a WHA team even calling this unique arena home in the 1970's.  The venue is among the most unique in all of sports as the arena is built into the underside of the grandstand of TD Place Stadium, home of the CFL and pro soccer in Ottawa. The opening in the 1960's occurred at the end of the mid-century modern design era, and the building has a modern, industrial look with the most prominent feature (aside from being wedged underneath a stadium grandstand) being the 8 huge metal support beams which hold up the exterior walls.  The steel, concrete, and glass design is interesting to look at and has a strong visual appeal, although the main reason for the unique design was function and allocation of space to fit everything underneath the grandstand.  Although TD Place seems like an unlikely NHL venue with a capacity of just over 10,000, it worked for the Senators for 3 seasons before they moved west to their current home in Kanata.  The 67's played away from this home for a couple seasons from 2012-2014 while the Lansdowne Park area was redeveloped to include more shopping areas and had undergone stadium renovations which forced the 67's to relocate across town, once again briefly sharing a home with the Senators.  The neighborhood is one that is revitalized, and the whole area, including the arena, has a modern European look.  A couple hundred yards away from the arena is the Rideau Canal, known as world's largest ice skating rink.  The direct surroundings are a mixture of new shops and restaurants, and old historic structures including the adjacent Aberdeen Pavilion, a magnificent exhibition hall which opened in 1888 and is known as "the Cattle Castle" and stills stand and hosts various events including the farmer's market which was going on on this Saturday afternoon as we checked the place out before the 67's 1pm contest against the Kingston Frontenacs.  Interestingly enough, the building has an important place in hockey history as it is the oldest surviving location in which the Stanley Cup championship was contested, as the Ottawa Hockey Club played for the cup here in 1904. You get a sense of history of the city of Ottawa as well as the importance hockey has played in the city as you roam the grounds of TD Place, and the revitalization will hopefully keep that sense of history alive for generations to come.  From the outside TD Place Arena looks like no other hockey venue we have ever seen, and the sense of uniqueness is rather refreshing in this era of cookie-cutter venues.

After securing $20 tickets at the outside box office window we proceeded into the arena via one of the pair of  entrances.  A concourse runs underneath the upper grandstand of the seating bowl on the north side of the arena.  A set of steps takes you down to the south concourse, and you at that point realize that the layout has the feel of 2 different arenas.  To the north, and wrapping around both ends of the ice, is a large seating bowl separated by an aisle at concourse level with seating extending up very high toward the ceiling.  Due to the constraints of the stadium structure the south side of the arena has less than a dozen rows of seats, all of which are under a low ceiling.  The south concourse is at field level of the stadium and acts as a concourse for events at facility as well.  The layout is certainly odd, but necessary due to the configuration which is integrated with the stadium.  With the main concourse at street level on the north side, much of the arena is built under ground level.   All seating is made up of red padded seats, and for the 67's games the upper 10 rows in the main seating bowl are curtained off to give it a more intimate feel.  Huge, angled concrete ceiling supports mirror the rake of the stadium seating above.  The arena has a big- time feel to it, and the most noticeable feature is the giant video board which sits above center ice on the wall above the south side grandstand.  A couple of other smaller video boards flank the main one to each side, and from the south grandstand you cannot see the video board so a series of TV screens are hung from the ceiling there.  The concourse is a busy place with quite a few food vendors, a kids zone which features a giant inflatable slide, and a team store of the corner of the concourse all providing interest to the different demographics of fans in attendance.  The concourse has an industrial feel with a black concrete floor and gray and red walls in team colors.  The ceiling of the arena is open, with exposed duct work.  Luxury seating is built into the arena walls in several locations, and the place has a rather clean look after the recent renovation.  Seating is lacking a bit of legroom though, and the capacity after the renovation is now listed at 9500 for hockey, making it the largest capacity venue in the OHL.  Although the NHL has long since passed by places the size of TD Place Arena this is a very suitable home for junior hockey, and the quirks and variety of seating options make this a fun venue in which to catch a game.

The gameday presentation at TD Place for a 67's game is polished and professional.  There are quite a few promotions, which seems to be the norm in today's OHL, but the unique setting of the arena, and big-time feel of the building make the game seem like an event.  A crowd of around 4,000 was on hand for this Sunday afternoon game, including a rather vocal contingent from Kingston there to cheer on their Fronts.  They have some cool features to the presentation to get kids involved including the section known as "High Five Alley"  which is the area behind the net where the 67's enter the ice and are greeted by kids getting the obligatory fist bump or high five.  The video board is well used, even in warmups, giving player names and info as the players skate through their warmup routine.  With the World Juniors ready to start several stars were missing from the lineup, but the game was OK, although the home fans had little to cheer about as Kingston took a 4-0 lead before Ottawa got 2 goals to make it 4-2.  Much of the crowd was made up of 67's diehards, with man fans wearing team gear or jerseys, and most very familiar with not only the 67's players, but the rival opponents on the Kingston roster.  It's a hearty bunch that like to get loud, but in a half empty arena the noise effect is lost a bit.  There were Timbits kids hockey at intermission and several between period contests.  All PA announcements were in both English and French as Quebec is just across the river a few miles away.  Despite the modern presentation you can still feel a sense of history here, as the 67's have called this arena home for nearly a half century, and have been well supported, becoming an Ottawa institution.  The fans were a bit slow to come back to the arena as the move to the suburbs while the arena and stadium underwent the renovations found many longtime fans and season ticket holders unable to attend games due to the distance. Also there was quite a bit of talk about price increases when the team returned to TD Place, but all in all the Ottawa fans are a good, vocal, knowledgeable bunch who enjoy their hockey. The renovation did improve some fan amenities, and parking was an issue, but is easily available if you search around a bit within a few blocks.  The new style lighting has been installed here as well, and that means lighting from the side directed at the ice, and somewhat in the eyes of the fans on the opposite side of the rink.  We still haven't figured out why this is so popular with recently opened or renovated arenas.  Attending hockey in the Lansdowne Park area has been a part of Ottawa area culture for over a century.  From the battle for the Stanley Cup a hundred yards away at the Aberdeen Pavilion, to NHL and WHA action here when the arena was known as the Ottawa Civic Centre, to now in the modern era of TD Place, hockey has played a major role in Canada's capital city and beyond.  With its truly unique architecture and design,  its setting along the banks of the world's largest ice skating rink, and its sense of a half decade of history TD Place Arena is a must see venue for hockey fans and has become an iconic venue in the world of junior hockey. 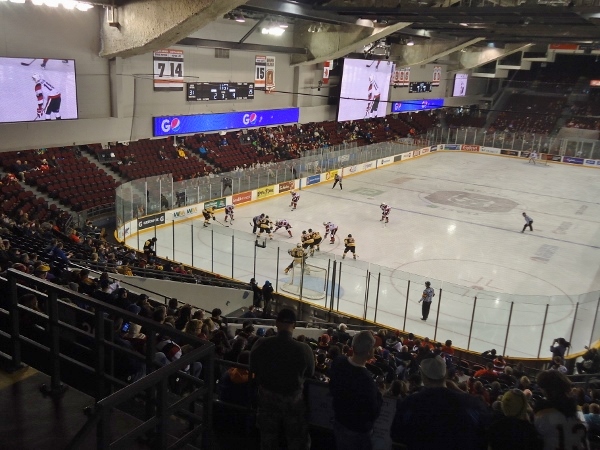 Other information about the Ottawa 67's can be found at:  67's Home

Other information about TD Place Arena can be found at:  TD Place Home

More photos of TD Place Arena can be found  Here