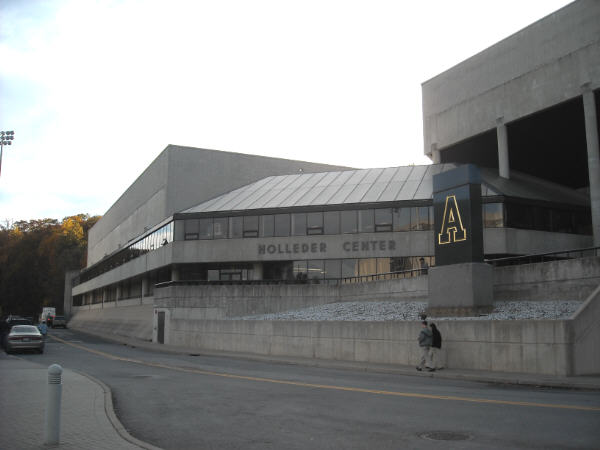 There's always something cool and sentimental about seeing one of the service academies play a game in any sport.  In this case the destination was clearly more important that the game itself.  A sunday afternoon game at West Point fit my schedule nicely, and although Army is not really know for their hockey prowess Tate Rink has been a must see on my list since starting this site.  The Military Academy takes up a large piece of land just west of the Hudson River.  I obtained directions from a couple different sites, but am glad I left early as the first gate to the base which the internet led me to was a military only entrance.  I ended up at the visitors center of the campus, and checked out the large gift shop.  I was surprised to see that the visitors center was extremely crowded, and with Asian tourists at that.  After entering a security checkpoint, having the trunk of my car searched, and being questioned on my destination I was on my way to the arena, which sits up on a hill away from the rest of the academy, and surrounded by the other buildings which make up the sports complex, including the football stadium across the street.  Security is certainly understandable as this is a military base, so I am just passing on a piece of advice to allow plenty of time when planning your travels to the game.

Tate Rink opened for the 1985 hockey season, and is housed in the Holleder Center, which is the bulding which houses both Tate Rink, and Christl Arena, which is Army's basketball arena.  Parking for the arena is a pretty good walk away, as you park in a lot above the football stadium, but it is free, so the walk is not a big deal.  The enterior of the building is concrete with a glass entryway which leads to the ticket office.  The entire building is built into the side of a pretty steep hill.  The basketball and hockey arenas are offset, and share the same concourse and concession area.  A very reasonable 10 bucks got me a ticket for today's game against Mercyhurst.  To get to the arena itself you go up a staircase from the lower level and are on the concourse.  There are glass windows which look out from the front side of the building and overlook the adjacent football practice field.  The hallways on the concourse and staircase itself are all a tribute to Army tradition with photos of the past teams, and even a photo of the old Army arena Smith Rink which housed the team for over 50 years until 1985.  There are the usual concessions and a merchandise table on the concourse.  The main concourse area sits at one end of the rink and there is a window overlooking the ice surface and the steep seating which runs down both sides of the rink.  To get to your seats you take one of the long hallways which run down each side.  The front side has large glass windows as mentioned, the back side has smaller windows.  It is there that you can clearly see that the building was built into the side of a hill.

Once inside the arena itself you immediately notice the steep seating.  Seating just under 2700 the place is a perfect size, and the sight lines are pretty good, although the seats up top are very close to the rafters.  You can still see everything from up there, but you are somewhat distracted by the rafters.  The entrance from the concourse opens up to the seating about half way up the seats, and the bottom half of the seats are plastic chairbacks, with wooden bleachers on the upper half.  The center ice score clock is basic and functional, and there is a press box area at the top of the seating on the penalty box side.  Of note is the fact that the front row of seats is quite a bit above the ice surface, with the seats on the side with the benches about 10 feet above the ice, and the other side is a little above the top of the boards.  Make no mistake about it this is a military arena, complete with a clock giving the time of day in military time.  The national anthem was sung by a soldier, and the place just feels like it has a lot of tradition.   A large mural of the Balck Knights logo and the arena name sits behind one goal.  One other odd point about the arena is that the ice sheet is 200 x 90, five feet wider than standard, yet not quite olympic size.

The game presentation itself is typical with music during stoppages, and contests at intermission.  I was a little bummed there was not more of a student presence there, as there could not have been more than a dozen cadets in the crowd of 1200 which took in the game.  I was also hoping for a pep band, which in my opinion makes any college hockey game way more fun than without one, but sadly there was no band.  A program book was $1 and the place is well kept,  and it is fun just to see the academy team in action.  It was neat to see the roster made up completely of Americans compete in a world where NCAA hockey seems to be made up of 50-60% Canadians.  Most of the Black Knights roster did have Junior A experience however, with at least half having played in Canada.  Mercyhurst dominated the game, winning 4-1, but the outcome of the game was not my point for making the 4 hour drive to West Point.  I am glad I could catch a game on a piece of land with such great tradition. If you are in downstate New York and have an opportunity you should check out a game here. Other information about Army Black Knights hockey is available at:  Army hockey home

Other informtion about Tate Rink  is available at:  Arena home