On an off weekend for the Jackals I decided to head to Indiana to catch a game.  No, not that Indiana, but rather the western PA town of the same name.  Tonight's action marked my third venue in the newly formed Single A level Mid Atlantic Hockey League.  The name S&T Bank Ice Arena brings images of the newer arenas such as the Wachovia Arena in Wilkes-Barre, PA, or the Sovereign Center, both newer mid-scale arenas, but in reality the home of the Ice Miners is part of the local township recreation complex.  That's OK though as some of the modern arenas feel too generic.  When approaching the building from the main street you first catch a glimpse of the large bright blue building, which could be mistaken for a warehouse from a distance.  There is an adequate parking lot on site, and parking is free.  Entering the building through the main entrance you are on the lobby area.  Tickets are sold at a table just inside the door, and the MAHL is using online tickets, so you actually get a piece of paper that looks like a receipt, rather than a traditional ticket.

Once inside you find the usual rec rink amenities, such as an arcade, pro shop and snack bar.  I will say the snack bar had a wide variety and very reasonable prices.  A buck fifty for 2 hotdogs is quite a deal!  The general admission ticket for this Saturday night game set me back 10 bucks.  The ice rink itself is in the left side of the building if looking at the arena from the parking lot.  This is actually a twin rink facility, but the rink on the right is used for indoor soccer (ugh!).  Upon opening the doors to the seating area you are immediately taken aback by 2 things: 1-  the ceiling is amazingly low.  There is a decent overhead scoreboard at center ice, but if a player held his stick over his head I am pretty sure he could touch the scoreboard. 2- this place does not seat very many people.  I am glad that they have a minor league team in this relatively small town, I just hope they can make a go of it with such a small seating capacity.  There are 6 rows of bleachers running down the entire side nearest the center of the building, and no seats on the other side.  There is standing room on the one end as well.  I would guess that if the place was jammed that including standees you would still be able to fit less than 1000 people.  That does not necessarily make for a bad experience however as all seats are right on top of the action, and the low roof makes it feel even more intimate.  The front row of seats is also even with the top of the boards. During tonight's game I was fortunate enough to meet up with local hockey fan Don Lancaster.  Who's that you ask? Don is the person who won the naming contest when the franchise was first announced, and came up with the Ice Miners monicker.  It was neat meeting up with a local thanks to this website, and I look forward to similar experiences in the future.  We discussed the league, the team and its future, and arenas in general.  As for the game itself the Ice Miners took a win over the visiting Jamestown Vikings, extending their pro hockey record win streak to 21 games thanks to some strong goaltending.

The game presentation was decent, although oddly the game actually started 20 minutes late, something you rarely see in pro sports.  They may have been some confusion over the 6pm start time as the DJ showed up late, not playing any tunes until mid way through the first period.  Don Lancaster mentioned there has been little advertising or marketing for the team, so hopefully they will pick that up in the future as a new owner took over only a short while ago.  I would give a couple opinions on what they could do to improve the product.  They could use a lineup sheet.  They were giving away free rosters of the Ice Miners, but no roster at all for the visitors.  A free  single sheet program with a couple ads would serve the purpose and also provide some advertising dollars.  Contests between periods are certainly not the reason I attend games, but could be a good way to get the fans more involved.  I will say I was impressed that the building was more than half full on this night.  Although still not a very high attendance it was more people than I had seen at another MAHL game I attended at another barn.  I cannot finish the report without commenting on the Ice Miners uniforms.  They are certainly different as the uniform simulates a coal miner's  attire of overalls and a short sleeve shirt.  They are unique and therefore pretty cool as well.  If you are a hockey fan who likes watching decent hockey in a small arena you will like a visit to Indiana.   The overall feel of the place reminded me of some college rinks, or even some Canadian Junior A arenas. If I had to sum up the experience in a 2 word phrase it would be "grass roots". 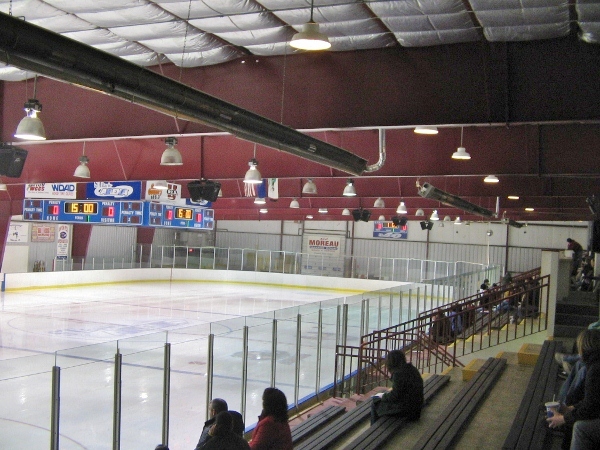 Other information about the Indiana Ice Miners is available at:  Ice Miners Info Page

Other information about the S&T Bank Arena is available at:  Arena Home