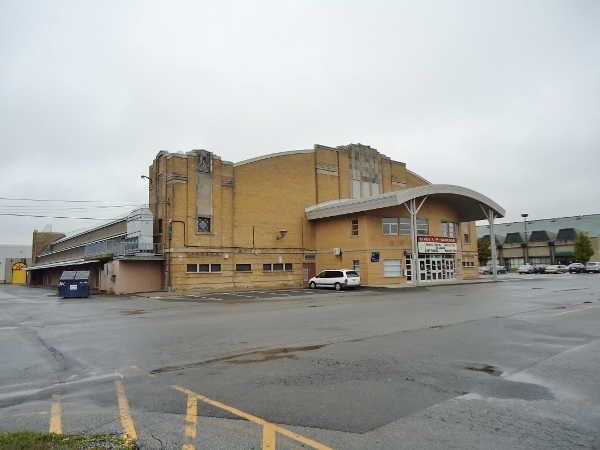 My amazing 2006 Quebec trip allowed me to see the LNAH during the league's heyday.  In addition to taking in the action of the roughest, toughest hockey league in the world I unknowingly was able to enter a time warp of sorts.  You see, as soon as you step through the doors of the Stade L.P. Gaucher you are propelled back in time to a far gone era.  Built in 1937 this pre-war gem has changed little over the years.  That is a good thing in my book.  Sitting in a residential part of town, intermixed with the rest of the town recreation complex, this place has been holding hockey games to the local residents delight for its entire existence.  I had no idea what to expect of this place, making the experience even more enjoyable.  There is a large paved parking lot sitting directly in front of the arena.  The large, weathered art-deco exterior is a throwback to days gone by.  You can tell from the stylings and somewhat rundown look of the outside of the building that this place is ancient.  I especially liked the simple marquee sign above the front door which announces upcoming games for its tenants- the Top Design of the LNAH, and the local Junior team the Gaulois.

I got to this Sunday afternoon game rather early, and bought my ticket at the recently renovated box office area in the lobby.  A 1996 construction project added the lobby and box office area to the front of the building.  This area is full of modern tiles and a couple box office windows, making this part of the building a mismatch with the rest of it, and gives little indication of what is to come once you enter the doors into the main arena.  $14 was the cost of my ticket, and I believe they were all the same price, whether you had the best seat in the house or ended up behind a pole, except for the slightly more expensive gondola seats.  Once inside the main arena you are taken aback by how old, yet well maintained this place is.  There is wood EVERYWHERE!  The high arching ceiling is wood, the seats are all wooden benches, similar to the arena in Shawinigan.  The concourse is even made of wood, and as you walk around the top of the arena on the dark, narrow concourse you hear the same creaking you would hear going up the stairs at grandma's house.  Spectator capacity is 2048, and that includes the standing area around the top, and on the end.  Above the concourse are what they refer to as gondola seats, which are small balcony boxes, similar to the press boxes in many older arenas, which are suspended between the steel rafters.  They are accessible by what could most closely be described as ladders which you have to climb to get to the box.   The beams which arch up support the roof also serve as viewing obstructions to the last couple rows of seats, but add to the character and charm of seeing a game here.  There is a functional center ice score clock, and a decent PA system.  The top of the far end of the seating area, on the end furthest from the main entrance is a luxury seating area of sorts which is closed off to the rest of the concourse.  The top of the near end of the ice has a large platform type standing area.

The atmosphere for this game vs the St-Jean Chiefs was amazing to say the least.  Having the game start off with multiple fights at the drop of the first puck added to the excitement, and having several shouting matches between supportive Chiefs fans and the local Tops fans is something you can expect with a game between close rivals anywhere in North America.  Having several all out fist-fights in the stands is something you can only experience in Quebec.  The fans in this league take their hockey, and their fights, seriously.  Being able to see such a unique (at least unique in this modern Bettman influenced era) brand of hockey is a real treat.  Being able to experience it in a throwback of a building such as this is priceless.  The place has so many quirks and features, both good and bad, that you would never find at a modern, corporately named arena.  The zamboni door actually slides up like a garage door at a car dealership.  The concourse gets so crowded due to its narrowness you can barely navigate it, and the colorfully painted wood everywhere makes you forget you are in the 21st century.  What also makes this place neat is it is the main recreation center in the town, with public skating, youth hockey and the like making sure this place stays active day and night.  Check out a game here if you can as this place is easily one of the top arenas I have ever attended. *Note- These photos were taken on my most recent trip to Quebec on September 24, 2010, and not at the time I attended the game outlined above as I did not have my camera then.  Rest assured nothing at the arena has changed between my 2006 visit for the game, and the visit a couple years later for these photos.

Other information about the St.-Hyacinthe Top Design is available at:  Top Design Info

Other information about Stade L.P. Gaucher is available at:  Arena Home