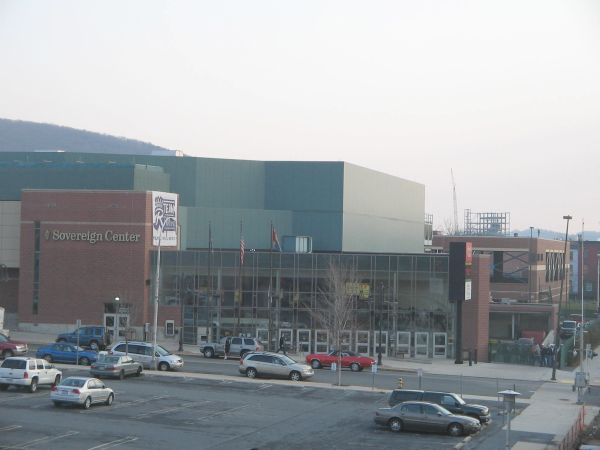 An early February family trip to Hershey's Chocolate World coincided with my Elmira Jackals road game in Reading, only an hour from Hershey, so it meant a family trip to a Jackals road game-Yay!  The Sovereign Center is a nice newer arena built in 2001 in downtown Reading.  The problem with the previous sentence is that it is built in downtown Reading.  After taking an afternoon jaunt by the building to get photos for this site I was none too enthused about heading back after dark for the game.  I have heard  stories about the crime in Reading.  In driving the 7 blocks from Route 422 to the arena I could see what people mean, and I am sure this is not the bad part of town. (Keep in mind my perspective is that of a guy living in farm country who can see cows out my window right now, and lives in a county with only 9 traffic lights).  We were fortunate enough to witness numerous open air "business transactions" at the urban shopping center which sits one block west of the arena, and also saw some of Reading's finest prostitutes in action on the way back to the highway from the rink.  Thankfully there is a large police presence near the arena around game time and a little after.  I guess  it is not easy holding a spot in the nation's top 20 most dangerous cities.  The city does an excellent job making the area  around the arena secure, it just wasnt much fun getting there.   Aside from the outside surroundings the place is not bad, although I did begrudgingly choose the expensive $9 parking lot directly across the street as we had the 2 little ones in tow.  We arrived just before the gates opened and people were lined up around the block to get in the main entrance on Penn Street, where we also found the will-call table and I was able to pick up my tickets.  Seats right near the top in a corner listed for $12.75, although obviously the Ticketmaster fees added a bunch to that amount.  In order to enter the seating area you must climb a large flight of stairs, where the ticket taker takes your ticket, and you are then on the wide main concourse.

The building itself is laid out nicely with a wide concourse running all the way around the arena, about 2/3 of the way up the seating area, and behind the seats.  There are several souvenir stands and a pretty wide variety of food for sale, although except for my requisite puck purchase we did not buy anything else.  The seating capacity is listed at over 7000, and the seats are pitched nicely and offer a good view. All seats are the usual molded plastic type.  Luxury suites go just about the entire way around the top of the arena.  There is a video board on one end at the top, and a shot clock on the other end.  The game presentation is decent, although not remarkable.  There is the standard overhead scoreboard, which sits pretty high up, giving a bit of an indication to fans that there is also an arena football team which plays here. The team skates out of a giant goalie mask for introductions, and as at most places, they only introduce the starters. (That is a pet peeve of mine).  This game also featured the Pink Ice promotion, making viewing a  litle more difficult than usual.   There were the usual on ice promotions and contests between periods, and my kids liked the mascot on the 4 wheeler shooting t-shirts into the crowd.  The remote control blimp was a big let-down as the guy operating it seemed rather unsure of himself as he never even let the blimp get over the crowd area at all. The sound system and PA are first rate.  Overall the fans seemed into the game, and were delighted that their home town team gave a 7-1 spanking to my Jackals.   The crowd was good at 90% full, as expected as these 2 teams had a huge line brawl during their previous meeting in Elmira.  I did get a kick out of how the Reading organization tried to portray the Jackals as savages.  A video interview shown on the scoreboard with the backup goalie for the Royals included how that type of fighting is not part of the game and was somewhat of an abomination to the sport.  I would have rather seen them use the brawl to try to sell tickets rather than try to hide it and declare fighting not part of hockey.  I guess they like to sell the Euro version of hockey to the fans, although noone was sitting down when a fracas broke out at the end of the game.  The loud noise I heard at the time must certainly have been disapproval rather than cheers (wink).

In summary the Sovereign Center is a nice place to watch a game, it just does not stand out from the mass of other new arenas around the country.  It also seems to personify far too many stereotypes of newer arenas out there.  Yes- it is named after a bank.  Yes- it has a nice design and good sight lines which are completely symmetrical with no "quirks".    Yes-they play the all-time cheesiest goal song ever- "Rock and Roll Part 2".  Yes -they have a video scoreboard, and play movie clips to try to get the crowd into the game.   I imagine if you were to try to capture the feel of early 21st century minor league hockey at these newly built arenas and pack it away in a time capsule then Reading would likely be the arena which you would choose.   Regardless, they seem to draw very well and have a strong fan following. Other information about the Reading Royals is available at:   Royals Home

Other information about the Sovereign Center is available at:  Venue home

Other photos of the Sovereign Center are available  Here

*Note some of the photos in the photo gallery were taken on a return trip to the arena on January 15, 2010*