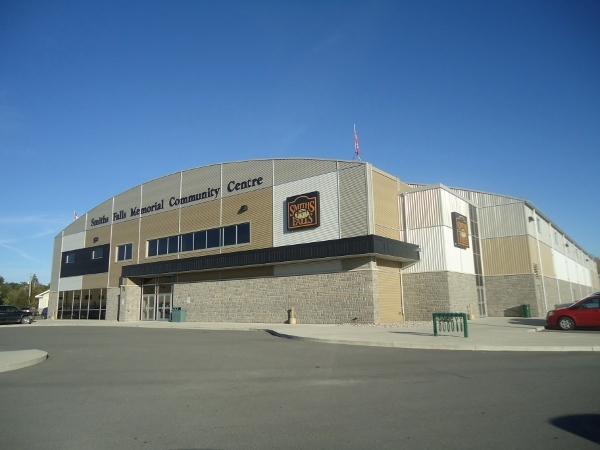 Night one of our early season trip had a lot of Friday night options on the table in Ontario.  Smiths Falls ended up being the choice, and the  two year old Smiths Falls Memorial Community Centre was the destination.  Smiths Falls is a blue collar town along the Rideau Canal, and was once home of a large Hershey chocolate factory until 2008.  The Community Centre sits just a short distance from downtown, and has parking lots around its impressive exterior.  The building has an outer profile that clearly indicates its purpose as an arena, with its softly arching roof, and modern look.  The exterior features a stone facade on the lower half of the building, with the upper part being made up of white, tan and beige metal panels.  There is a block-letter sign atop the end of the building near the lobby entrance which declares the arena's name.  Some modern looking square windows are also placed in a slightly asymmetrical layout  near the entrance.  Overall the arena has a sharp, newly built look to it.  An electronic marquee sign near the parking lot entrance advertises upcoming games and events, but it is also clear that the building sees much more use than just being home of the Bears.  In addition to being used by community residents for exercise and skating the SFMCC also hosted an inter-league Major Junior preseason game last month between the Ottawa 67s and Gatineau.  For a Junior A level arena it is impressive indeed.

Once inside the main entrance to the arena you are in the lobby area, which also serves as the concession area, and has several tables to sit and enjoy a snack.  There is a box office window to the left where you can get your tickets.  A general admission ticket for tonight's game against the Cornwall Colts cost $12.   Free rosters were available, and the concession area has several plaques of former Bears who made the big time, including Rob Dopson and Billy Smith.  The lobby also features glass panels overlooking the end of the arena.  From the lobby you can enter the arena itself at ice level and walk to your seat.  The seating area of the arena has a clean look, and features 10 rows of green plastic seats running down each side.  The seats themselves are a little odd in that they have no arm rests at all.  There is a large pressbox on one side, across from the benches and penalty boxes.  Atop the seating area there is a fairly wide concourse which is laned off for use as a walking track.  The track runs around the top of the arena, and there is standing along the rail, which also features a shelf in many spots.  The arena is listed as having 1505 seats, and can clearly hold several hundred more with standing all the way around the top, as well as some folks choosing to stand along the glass on the ends.  Despite the arching roofline of the building the ceiling inside the arena is flat.  A low profile basic scoreclock sits at center ice, and serves its purpose, although not having any room for shots-on-goal, or the jersey number of the player committing the penalty.  Above the lobby is a glassed-in room on the outside of the concourse which appears to be a meeting room, but is essentially set up as restaurant type seating.  The arena can hold around 2500 total including those in the restaurant.  The outer walls of the track concourse are filled with plaques and community sports hall of fame type items.  Seating provides a good view of the action, and for an arena at this level it certainly has a big-time feel.

The game experience at this Bears game was fun, although as with many teams in the CCHL the attendance was under 1000. The presentation is basic, with no player intros before the game.  The PA system sounds loud and clear when music is played during stoppages, but is very muffled when the announcer makes calls for goals or penalties.  This is surprising since this is such a new building.  There were contests at intermission including a chuck-a-puck contest and a fan shot from the blue line.  The temperature inside the arena was actually a little too warm as the overhead heaters were going strong despite some nice early Fall weather outside.  The fans in Smiths Falls certainly love their team, and the crowd is an odd contrast of many older folks who have clearly been attending games faithfully for decades, and a lot of teenagers, who seemed to be looking for something to do on a Friday night.  The teens seemed to congregate on the far end of the arena, and seemed more interested in socializing and texting than watching the game.  Nonetheless there is not much else like watching small town junior hockey in Canada.  The teams play hard, and despite being a newer arena the play itself reminds you of hockey from the past.  In keeping with Ontario tradition there is a small portrait of the Queen above the goal nearest to the arena entrance.  That is a nice touch and a way of preserving the past.  The Bears were not able to come away with a win, losing to Cornwall 4-3.  Although the Smiths Falls Memorial Community Centre is a new-school, modern arena, the hard working nature of Junior A hockey, and the smalls towns that are often lucky enough to host it, will always harken back to hockey in the old days. 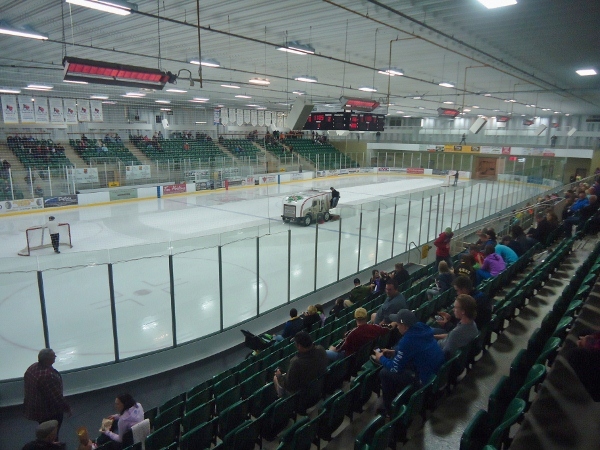 A box score of the game can be found   Here

Other information about the Smiths Falls Bears can be found at:  Bears Home

Other information about the Smiths Falls Memorial Community Centre can be found at:  Arena Home