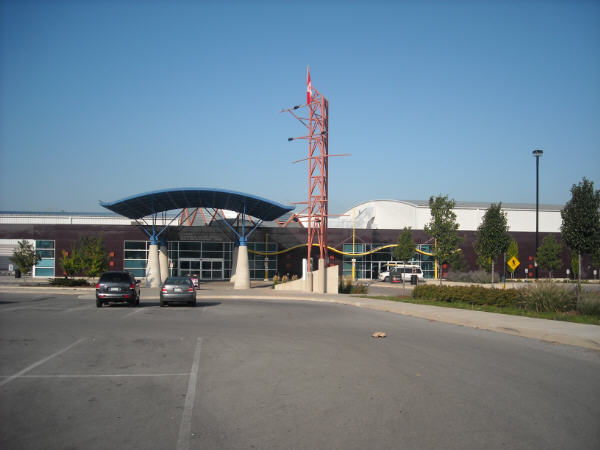 A last minute addition to my 3 day OHL trip found me stopping at the Seymour-Hannah Centre for some CIS hockey as a part of the Annual Steel Blade Tournament.  This is a 2 day, 4 team tourney hosted by Brock University.  As I planned on going to the Niagara Ice Dogs game only a couple miles away that evening a 4pm consolation game at this rink fit my schedule nicely and filled my time much better than a walk around the mall would have.   This  large purple building houses 4 ice pads and appears to have been built within the last 10 years.  It is a city owned facility sitting next to the town skate park, and has a huge parking lot. As with just about any rink in Canada the place was buzzing with activity on this Saturday afternoon, as there was youth hockey and public skating going on on 3 of the ice pads.  The larger arena was reserved for the Brock tournament.

I wasn't sure what teams would be in the consolation round of the tourney, but found out when I arrived that the game would feature a matchup of Western University vs Guelph U.  I was hoping the Badgers would be in the 4 o'clock game just so I could get a better feel of the atmosphere of the place and the fan response, but a neutral site game would have to do.  The building has a nice pro shop and a couple snack bars, including a nice sit down restaurant.  It is very modern and certainly must be appealing to the hockey dads and moms in the area as there are quite a few creature comforts.  A St. Catharines sports Wall of Fame honors local sports stars, and sits along the hallway in the arena.  A ticket to the game cost $7, and would have also allowed admission to the final game later that day as well.

The arena itself was pretty decent.  There was seating on both sides, with the side behind the benches having 11 rows of modern plastic individual seats, and the side opposite the benches having 6 rows in the same configuration. Unfortunately the entire rink is circled by an annoying layer of netting.  I am sure the insurance regulations say that avoiding getting hit by a puck is more important than being able to see the game without obstruction.  I would guess the capacity at between 1500 an 2000.  There is standing room on both sides behind the top row of seats.  The sight  lines are good and the sound system was excellent.  The attendance likely numbered less than a hundred, but they still had a decent game presentation with music during the stoppages, etc.  Fans can view the game from the hallway in the building behind some glass doors on one end, and there is a center ice scoreclock.  There are also overhead heaters to make the fans toasty, although today's 65 degree temperatures made their use unnecessary.  I really like CIS hockey, as it has all the action of U.S. college hockey, the players don't wear the stupid cages that they do in the States, and the level of play is excellent.  In addition to some former OHL players on each squad there were even a couple who had spent time in the minor pro ranks.  The game itself was fantastic, with Guelph taking the 2-1 win in a shootout.  The only bummer was that there were so few people there to witness it.   If you are in town for an Ice Dogs game and Brock happens to be playing it would be worth checking out.  I only wish I had actually seen Brock in action to get a better feel for the place.  Nonetheless this community arena serves as a good home for the Badgers, as well as a modern, busy place for locals to get ice time and participate in ice sports. 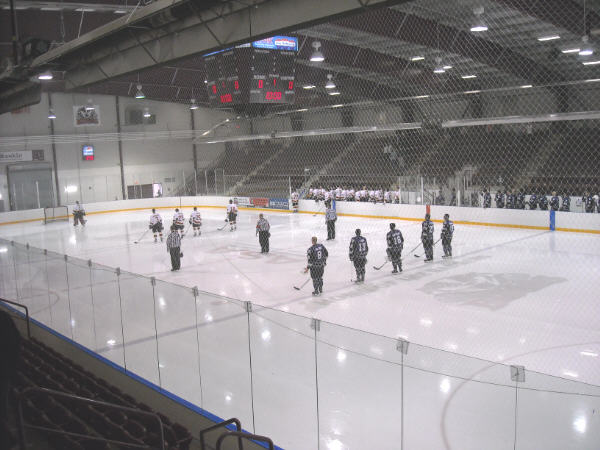 Other information about the Brock Badgers is available at:  Brock hockey home

Other information about the Seymour-Hannah Centre is available at:  Arena Home

More photos of the Seymour-Hannah Centre are available  Here