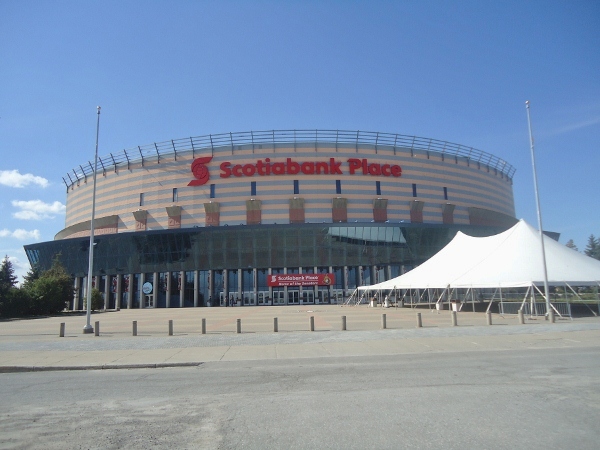 Most of you know that at RTR we like all arenas, big or small.  Today the first half of the day leaned way in the "big arena" direction with a stop at the modern mammoth known as Scotiabank Place for a 2PM tilt between the Ottawa 67's and Erie Otters.  This arena, just off of the 417 Freeway on the western edge of Ottawa's suburban region, is to be the temporary home of the OHL's 67's for a 2 year period while their traditional home, the Ottawa Civic Centre, and its grounds are renovated.  In an odd contrast we would catch a CCHL game in Carleton Place at an arena which holds about a thousand a couple hours later.  Upon first sight (and if you are driving in first sight is a mile or more away) you cannot help but be impressed by the size and scale of this NHL arena.  As you know this arena is host to another team besides the 67's.  The reddish brown concrete on the lower part of the exterior is offset by the pale blue and yellow accents at the top.  Large block letter signs designate the name of the arena on multiple sides on the arena just in case you weren't sure you were in the right place.  The entire arena is surrounded by a multitude of parking lots, as you would expect of an arena capable of holding 20,000 fans for hockey.  Parking in the lot across the street was $7, although I likely could have searched for a more cost effective option by driving around a little more.  A nice glass-walled facade sits at the main entrance and designates the main lobby and box office area.  With no NHL season starting yet this year due to the lockout the grounds and landscaping look like they may have been neglected a little, but the place is impressive nonetheless.  As you walk up to the entrance you are taken aback by the scale of the building as it is tall, and really stands out among the low-rise buildings and businesses in the area.  On one of the side entrances there is an amazingly detailed mural paying tribute to the NHL team's 20 years in the region.  Lots of brickwork and nice walkways surround the building.  Although smaller, less mainstream arenas are more our style Scotiabank Place still seems state of the art although it has been open since 1996.  This building has also hosted the World Juniors in 2009.  Clearly it is an arena which is "on the map" for even casual hockey fans across North America.

Stepping into the main lobby of the arena you get that same "I am small" feeling as you do from outside the building as the infrastructure is clearly set up for NHL size crowds.  I bought my $19 ticket from one of the multiple box office windows which were open, and proceeded up one of the 2 very large staircases which take you onto the upper concourse.  This wide concourse serves as the concourse for the smaller second level, as well as the large upper level seating bowl.  The concourse is nicely done with not only ample concessions, but tributes to Ottawa area hockey history as well as an amazingly cool display of over 100 junior and minor hockey jerseys from the Ottawa region teams, from as far away as Kingston and Pembroke.  Seeing these jerseys lined up on a wall 20 feet high is quite the sight.  Although the 67's are essentially the primary tenant until the lockout is over there is not much team presence on the concourse, save the merchandise set up at the top of the stairs and a booster club table.  There is also a narrower lower concourse, which for this game had more of its concession stands open, and is essentially a mall, with stands and vendors everywhere, including a fully functioning Tim Hortons.  With big time arenas come big time prices though.  The Timmy's donut was only slightly above regular price, but signs indicated that hamburgers were $8.75, and souvenir pucks were 10 bucks.  Thankfully there were free lineup sheets available for fans.

Once inside the seating area of Scotiabank Place you truly realize that you are in a big-time arena.  Although the Jumbotron is giant it doesn't seem large at all due to the overall scale of over 19,000 seats surrounding the same size ice sheet as your local community arena.  As mentioned there are 3 levels of seating.  There are also 3 levels of luxury suites, one at the top of each level.  Multiple message ribbons ring the seating areas and the arena seems very "busy", with lots of signage and ads.  I arrived early and before warmups they were streaming music videos in both English and French over the video screens.  The seats are uniformly maroon, and all are padded.  The boards feature the annoying backlit signs so common in NHL arenas.  The middle level of seats features a mere 6 rows, but the upper and lower levels could make up a good size arena on their own.  Its cool to just sit in the stands and look over the entire arena and reflect on just how big this place is.

The 67's game presentation is polished and professional, with lots of ads and promotions thrown in.  There may be a few too many ads for my taste, but that is true at many Major Junior and minor pro games these days.  They go a little overkill with the message ribbons turning into strobe lights during player intros and after goals, but I guess they figure that they have them so they may as well use them.  The atmosphere is about what you would expect when you have a crowd of 3900 in a place that holds 20,000.  Sure the crowd was vocal in their support of the 67's, and they had a lot to cheer about with a 8-1 win and a couple fights.  It just has that empty building feel when the arena is so big and there are so many empty seats.  This being an early Saturday game the crowd may have been down a little, but it seems that many of the regular fans were not able to follow the team to the outer suburbs when they moved from the Civic Centre which is closer to the heart of Ottawa.   All PA announcements and the entire game presentation is bilingual, and Ottawa's presence as the capital of Canada, as well as its proximity to Quebec are both very evident.  Certainly it was fun to branch out to a larger arena than we would normally attend, and I am sure with the hockey tradition in the area that experiencing a game here with 20,000 cheering fans would be amazing.  Still we left glad that we had been to Scotiabank Place, but also glad that we have more than NHL-size arenas as options to get our hockey fix. 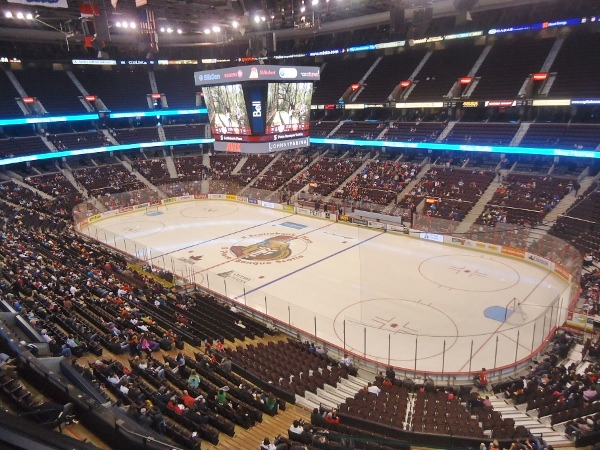 Other information about the Ottawa 67's can be found at: Team Home

Other information about Scotiabank Place can be found at:   Arena Home

More photos of Scotiabank Place can be found Here