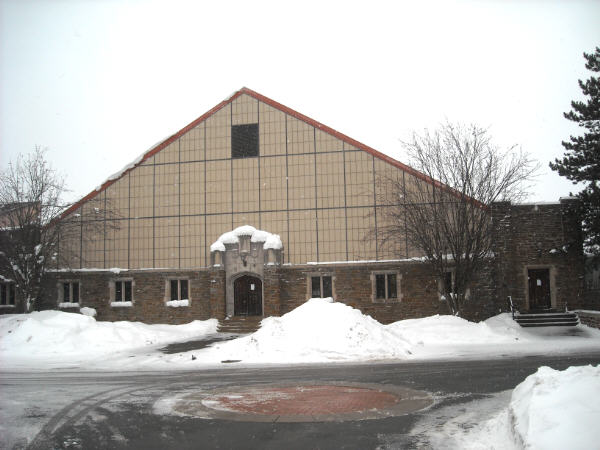 Tucked away on the campus of a small private school in the hills south of Utica is one of the hidden treasures in all of hockey- Sage Rink.  Built in 1921 this arena is billed as the second oldest college hockey arena still in use, behind Matthews Arena in Boston.  I wasn't sure what to expect, but after checking  out this throwback of a building I am left with the impression that every hockey fan must take in a game here at least once.  Honestly other than seeing the name of the school listed in the Division 3 standings on occasion I had never given Hamilton College a second thought.  When I read a little more about their rink I was determined to get there.  The building sits on campus, in the middle of campus in fact, and can easily be mistaken for a library or lecture hall.  In fact on my trip it appeared as though students were still on winter break as there were not many people around, and I walked right by the building not knowing that its sheet of ice and shoehorned spectator seating laid inside its stone facade and medieval looking doors.  This place is a gem, and I am glad I found it in today's world of cookie-cutter arenas.

The arena was renovated in 1993, but other than newer style chairback seating it seems as though little would have changed since the 1920's.  There is a new entryway which was likely added during the renovation and the lobby has a couple benches and couches for students to sit between athletic classes.  The rink is actually connected to a newer fieldhouse which houses an indoor track and basketball court, and the rinks other side is flanked by another building housing other athletic facilities including the pool.  As mentioned the building sits neatly on the quad of the campus and the architecture clearly is not that of your normal hockey rink.  Although the back of the building is somewhat tucked away, walking around to the back you find a glassed in zamboni garage on the back of the building and the overall shape and appearance reminds me of old amusement park photos from the 1930's as the exterior looks like inside could be a carousel or even a ride like "the whip".  On the day of this midweek game against Amherst there was noone selling tickets, thus admission being free.  I stopped at the arena several hours before game time on this snowy afternoon and had a great time walking around, soaking in the sights.  I even snuck up into the open air pressbox which hangs over one corner of the ice to get a couple photos (Shh- don't tell anyone).  The layout of the seating finds 3 rows of chairback seats running down each side, with metal roof support poles approximately every 20 feet, making for lots of obstructed viewing.  Sadly, unlike hockey in the 1920s there is that annoying protective netting covering the seating area on both sides and the end seating, meaning you have to look around poles and through netting to watch the game.  The end seating, which is accessible through a neat old hallway just inside the front entrance of the building, consists of 5 rows of seating, and aside from the netting, offers a good view.  The seating is built on a mezzanine which sits virtually on top of the glass, meaning that the players do disappear into a blind spot when directly up against the end boards.  The far end of the rink has no seating, and there are also no seats behind the team benches or the penalty box area.  The concourse (a walkway actually) which runs behind the side seating is so narrow that 2 people can barely pass.  There is an older style, yet not 1920s vintage, center ice scoreclock which is more than  sufficient, and the white ceiling and support beams do brighten the place up.  I also like that fact that the place is very cold inside.  They do have space heaters hanging from the ceilings however.  Also clearly part of the renovation is a plaque describing the history of the building which sits just inside the entryway from the lobby.  I am guessing they realized they had someplace special when the renovated Sage Rink.  About the only tacky thing about the building is the large photo of former Mighty Ducks goalie Guy Hebert which hangs on the far wall of the arena in way too big of a proportion.  It seems the former NHLer was a Hamilton alum, a fact noone can miss based on the size of the photo.  His head is almost as big as the zamboni.  I don't know a whole lot about the school itself, but the campus itself is very nice, and judging by the fact that the lineup card listed mostly prep school hockey vets from places like Pomphret School and Philips Andover Academy, I am guessing that the tuition ain't cheap.

The game experience is clearly nothing special.  Other than playing music during the stoppages through a muffled PA system the game is the only attraction.  If you want to see contests at intermission, or for that matter be able to view the game without a lot of obstructions you should go elsewhere.  If you want a taste of hockey how it used to be then watch a game here.  Where else do the team benches have roof support poles in the middle of them?  The size of the ice is also listed at 210 x 85, making it longer than normal.   The concessions in fact were not even in the same building, but rather in the adjacent fieldhouse where a girls basektball game was going on, and by the time the second intermission came around the concession stand had closed down as the hoops game was over.  Clearly Sage Rink has a small seating capacity, which I would guess to be around a thousand.  If the place were full  it would be very loud as the interior is laden with echoes.  Sadly there were only about a hundred hockey fans on hand, but I think that may have been because students were on break.  Amherst took a 6-4 win over the Continentals, but I was not concerned with the score, I was there to breath in a piece of history.   It is places like Sage Rink that attract me to Division 3 hockey in addition to the more mainstream minor pro and junior leagues, as if I were a "hockey snob" and turned up my nose at the level of play there is no way I could see some great building such as this one. 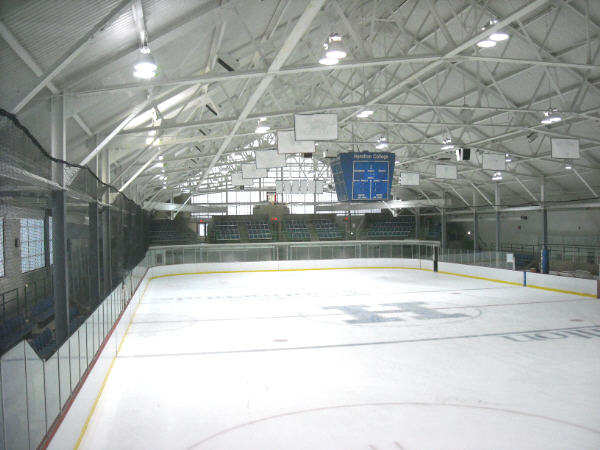 Other information about the Hamilton College Coninentals is available at:  Hamilton Hockey Home

Other information about Sage Rink is available at: Rink Home