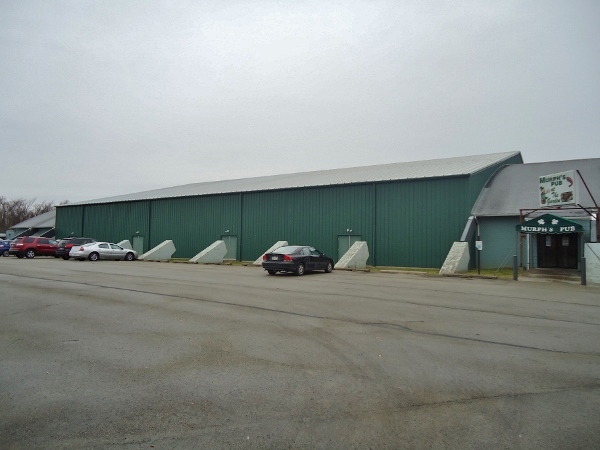 We don't usually make return stops to arenas for updated reviews.   We want to share our first impression of a venue, rather than re-hash any experiences we've had at a particular building.  We're making an exception with the Rostraver Ice Garden.  This unlikely setting for pro hockey first saw us visit back in 2007 when the Mid-Atlantic Hockey League's Mon Valley Thunder called the Ice Garden home.  You can read about that visit Here .  That visit was one of our first arena reviews during the infancy of Roaming The Rinks.  A lot has happened here since then, including the Thunder folding shortly after our visit, and the arena returning to mainly a community use facility.  The Ice Garden made the news after a major roof collapse in 2010  as a result of snow buildup on the roof, which fortunately did not result in any injuries, but did require the roof and exterior wall structure to be almost completely rebuilt.  Fast forward to 2014 and pro hockey has returned to Belle Vernon in the form of the Steel City Warriors who replaced the ill-fated Southwest PA Magic, who folded after a single weekend of Federal League play and did not host a single home game.  Yes, indeed to say the history of the venue, and the pro franchises which have occupied it, is a tumultuous one would be an understatement. The Ice Garden opened in 1967 and was a hangar shaped arena at the time.  The venue was even the original practice rink for the Pittsburgh Penguins.  The building sits up on a hill above Route 51 in a wooded area.  A large parking lot sits in front of the arena, and you immediately notice how the structure appears to be 2 completely different building styles mashed together.  The original building and arched roofline still sits on both ends of the building, and a new green metal-sided structure is built between the 2 ends, as a result of much of the building needing to be replaced after the roof collapse.  It looks gaudy, and certainly odd, but was clearly the easiest and most cost effective way to keep this arena active as a hockey venue after such a devastating event.  You can still see the concrete roof support buttresses jutting up from the ground that once anchored the curved wood roof beams.  Now they are not connected to anything as the middle of the building is squared off, but serve as a reminder of what once stood in their place.  The original roof line still exists on the ends.  The main entrance is at the lower end of the parking lot, and features simple signage and a basic glass entry door.  At the other end of the building is the entrance to Murph's Pub, which overlooks the ice and serves food and beverages to local patrons. The siding on the ends of the building is falling off in some places, and the whole property could certainly use some TLC, but at least hockey is alive in this corner of Southwestern PA.

Passing through the main entry doors you find yourself in a 1960's skating lobby.  There was a ticket table set up selling $10 tickets for this 8pm game against Danbury.  The tickets were actually a wrist band in this case.  A second table was also set up selling Warriors merchandise.  This was the second ever home game for the new franchise (very new as the team and ownership group was thrown together in a couple week time period).  Parts of the lobby overlooks the end of the ice, and there are arcade games and a skate rental window in the lobby as well.  A concession stands sits at the end of the lobby with a few banquet hall style tables set up.  There is additional space at the North end of the building which is used as a meeting or banquet room.  To enter the arena itself you pass through one of the doors on the end and see a throwback style hockey rink which is likely largely unchanged since its opening in the 1960's.  The wooden arching roof of old has been replaced by a still high white metal ceiling held up by massive blue metal beams.  The arena is very cold, and the seating is very basic, with 9 rows of wooden planks set up on concrete slabs with a not-so-steep angle.  The Mon Valley Thunder logo, which is used by local youth and amateur teams, sits at center ice.  A basic, but nostalgic looking scoreclock hangs from center ice.  The very ends of the seating area still feature the arched wooden ceiling and support beams.  Access to the sections of bleacher seating is via an aisle that runs in front of the bleachers along the glass, and is raised up to be even with the top of the boards.  Everything about the Rostraver Ice Garden screams "old school".  The team locker rooms are at the end of the ice, flanking Murph's Pub which overlooks the ice from above and can be thought of as the luxury suite section of the arena if you will.  We've seen various numbers reported for the seating capacity of the arena, but think that the figure of 2,500 would be most accurate.  There are various banners hanging in the arena from local youth teams as well as the nearby California University, whose ACHA team also calls the Ice Garden home.  This arena was an unlikely home for pro hockey when the Mid-Atlantic League gave it a go here in 2007.  It is still an unlikely venue to be hosting the Federal League today.

Being that this was only the second ever home game for the Steel City Warriors they were still trying to get the kinks out of the gameday presentation.  A small makeshift press area was set up in the back few rows above center ice, with the PA announcer and radio announcer set up there as well as the stat guys.  A couple of large speakers were set up at the ends of the grandstand.  There was music during stoppages and at intermission but no other entertainment.  Most fans chose to head to the lobby where it was a bit warmer between periods as the temperature inside the rink was quite frigid.  There were a few glitches in the presentation which we hope were worked out, such as not announcing most of the penalties over the PA, and goal scorers were announced, but with the time backwards (time remaining in the period instead of time elapsed).  We like the Federal League, we really do, and think the quality of play is better than it gets credit for, however watching a pro hockey game here just seems like it is out of place.  Attendance was very light, with less than 200 fans on hand.  We have a feeling that a lot of folks in the area were not aware the team even exists.  Sight lines are not great as the slope of the seats is too shallow, but with the cold temperatures many fans chose to stand anyway, and with such a small crowd it was easy to find a decent place to watch the action. The glass is very low on the sides and the experience here is very much a throwback one.  The game was old time hockey for sure, with the underdog Warriors, who had a roster thrown together in about a week, were outmatched against Danbury.  They did not go down without a fight however and the game had a couple decent scraps, a near brawl, and featured the 2 coaches screaming and gesturing at each other over the partition which separates the benches.  It was fun and entertaining and is everything that hockey in the low-minors  is supposed to be.  Danbury took a 9-4 win and the couple hundred fans certainly got their money's worth. We don't see the Rostraver Ice Garden as a viable home for minor league hockey in the long term, but are glad we had a chance to return to not only see the renovations and aftermath of the roof collapse, but to be able to do so while some hardworking, under-appreciated players took to the ice and gave it their all at a pro level. 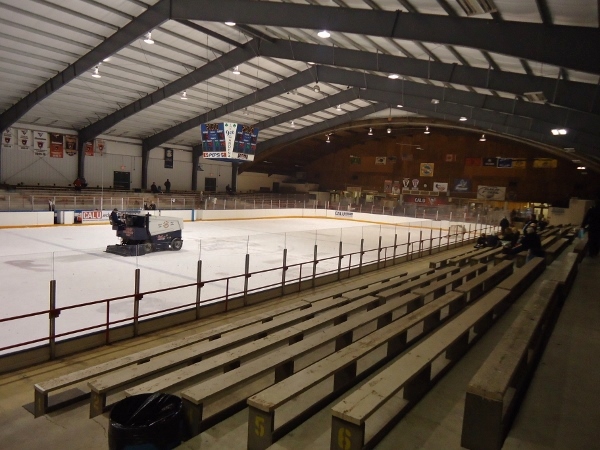 Other information about the Steel City Warriors can be found at:  Warriors Info Page

Other information about Rostraver Ice Garden can be found at:  Arena Home

More photos of Rostraver Ice Garden can be found  Here