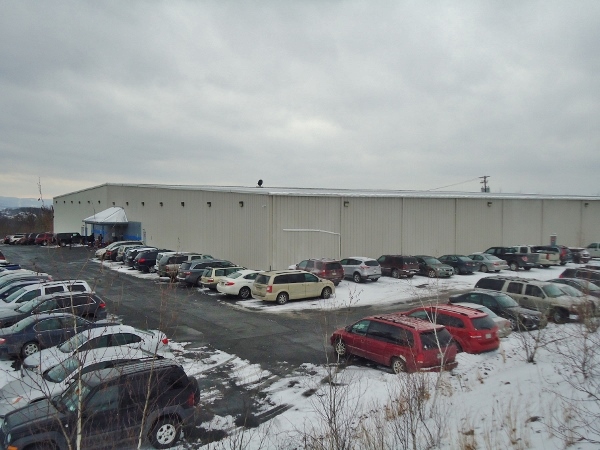 We here at Roaming The Rinks have done it.  If you live in the Northeastern U.S. you have probably done it too.  What's that you say?  Well we have often overlooked and ignored Tier 3 Junior hockey in this part of the country for a couple reasons.  First, there are lots of other hockey options in the Northeast, and secondly, this level of play in the Northeast goes largely unpublicized and does not have an outward goal to attract many spectators.  We admit that in overlooking this level of play we have been missing out.  We were looking for a mid-January hockey fix, and a noon time Sunday game for the Eastern Hockey League's Wilkes-Barre Scranton Knights fit the bill nicely.  Revolution Ice Centre is a twin rink facility which opened in Pittston under the name The Ice Box in 1997,and the second ice pad was added in 2001.  The arena sits in an industrial part of town.  The long driveway up the hill to the arena, and the stark box-like exterior make it easy to pass this by and think it is a warehouse or industrial building.  The tan metal siding and windowless exterior are simple at best.  There is parking above the arena, as well as a large lot below the arena, which wasn't very well plowed on this day.  This non-descript arena did serve as the practice arena for the Wilkes-Barre Scranton Penguins at one time. The Knights play on ice pad #2, which appears to be the newer section of the arena, and is on the downhill side of the building.  A small entry door sits and the end of the building, and to access the main part of the arena you walk down a hallway past a nicely stocked pro shop which has all kinds of Knights gear in addition to items needed by local hockey players and figure skaters.  The hallway opens up into a lobby where there are some tables and the food concession stand.  The lobby has a high ceiling as it is at the center of the building, between the 2 ice pads, and is decorated with an odd combination of international flags and Jerseys of formers WBS Pens players as well as a bunch of European hockey jerseys.  The vibe resonates as a small community arena rather than a big-time sports arena for sure.  We do like that they used the Canadian spelling of the word "Centre" in the facility's name. Revolution Ice Centre is a simple enough place, but features a quality on ice product that likely goes unnoticed to even local hockey fans.

A simple entry door from the lobby leads to Arena #2 which is home of the Knights.  A suit of armor greets the fans who enter the seating area as it sits off to the left of the entry.  The Knights also enter the arena through the same entry door, and pass by the life-sized Knight before taking to the ice.  There is a decent sized grandstand which has 7 rows of wooden bench seating on top of a concrete grandstand base.  The seating runs from the faceoff circle on one end to just past the blue line on the other end.  The rake of the seats is rather steep and there is a standing area above the seats with an additional concourse hallway which leads to a fitness center and team offices.  There is a pressbox in the far corner above the zamboni garage.  Team benches and penalty boxes are on the opposite side of the ice from the seating.  The interior of the arena is bright, with a white ceiling, white painted metal support beams, and gray and white interior walls.  There are banners recognizing the building's tenants, including the Knights, Scranton University's hockey team, as well as my alma mater East Stroudsburg University.  The layout is simple and there is certainly not a luxurious feel to the place, but it offers the necessary features to hold a fairly high level of hockey.  There is a single scoreboard on one end, and the high ceiling makes the arena feel a bit bigger than it actually is. We couldn't find a listing of the official seating capacity, but would estimate that the arena easily holds 500 fans when factoring in standing room.

The gameday presentation for a Knights game is all business.  There was no admission charge for this Sunday matinee.  The crowd was sparse with a listed attendance of 54, and there really wasn't much of a fan atmosphere, although there were songs played over the PA during stoppages.  Nothing goes on at intermission except ice resurfacing, and the arena is so cold that everyone congregates in the lobby until the game starts up again.  There were also no rosters or programs available.  We did like the fact that the arena has some touches which clearly that it is the Knights' home.  There is quite a bit of signage indicating the Knights presence, and the suit of armor at the arena's entry adds a bit of flair.  The lobby also features trophy cases from awards won by both the Knights Junior team as well as their successful youth and midget programs.  An additional suit of armor sits in the lobby near the trophy case as well.  We will say we were completely impressed with not only the level of play, but the entertainment value of the game itself.  The game against the Philadelphia Little Flyers was a battle for first place. The intensity level was as high as you will find at any level of hockey.  It was evident from the start that the teams hate each other, and that made for a hard hitting, intense game.  We often remark that the main thing missing from the hockey of today is that teams don't seem to hate each other anymore, often making for emotionless games.  Not here, at least for this game.  There was a great toe-to-toe scrap, and a good quality of skating and hockey ability displayed all afternoon.  The EHL is a new league formed from teams who were in the Atlantic Junior Hockey League as well as some leftover franchises from the EJHL.  We could not have enjoyed a hockey game any more than we did at Revolution Ice Centre.  In checking the rosters of the teams there is a good mix of talented players, many of whom spent time in the NAHL and even some Canadian Junior A Leagues.  The Knights took a come from behind win with a goal with 30 seconds left in regulation and then a 5-4 overtime tally to beat the Little Flyers.  Sadly only a few dozen fans were there to see it.  We will not make the mistake of overlooking Tier 3 hockey anymore as the entertainment value of this game was near the top of all of the games we attended this year, regardless of the level.  If we lived nearby we would be regulars at Revolution Ice Centre to watch some hard working players take the ice and offer a good product despite being one of the best kept secrets in Northeastern hockey. 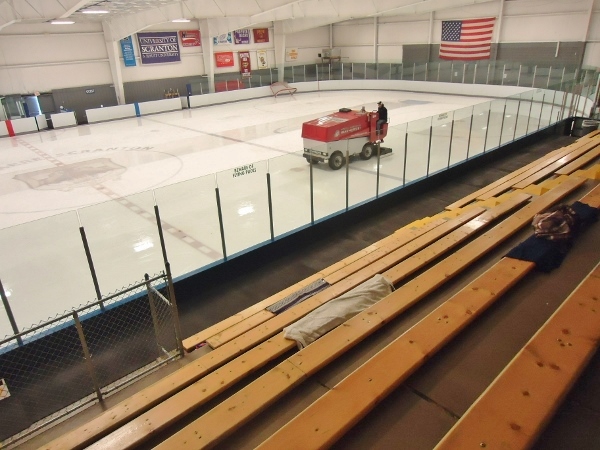 A box score of the game is available Here

Other information about the Wilkes-Barre Scranton Knights can be found at:  Knights Home

Other information about Revolution Ice Centre can be found at: Arena Home

More photos of Revolution Ice Centre can be found  Here