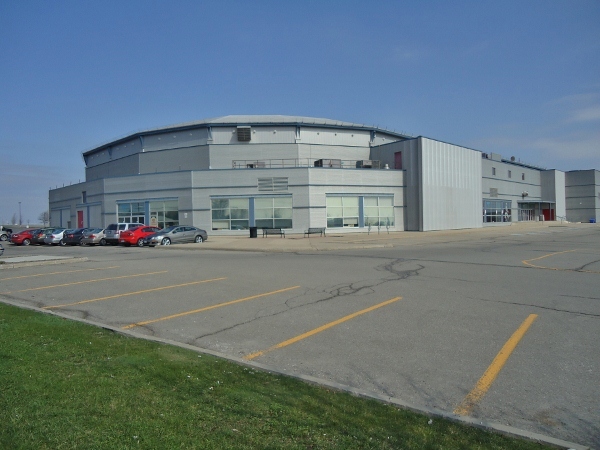 Ten-hut!  It's time to talk about the Powerade Centre, home of the Brampton Battalion.  We were able to catch a Sunday afternoon OHL playoff game against Sudbury at this modern venue which sits in the approach path of Toronto's Pearson International Airport.  The Powerade Centre sits within sight of the 407 Freeway, and only about 15 minutes down the road from its closest OHL rival in Mississauga.  The Powerade Centre is a very large building, surrounded by large parking lots.  It has a stark exterior of silver and light blue corrugated metal, and has a modern industrial look which fits the Battalion's military theme quite nicely. The roof is gray, and the entrances are marked by colorful modern type accent walls.  The arena is nicknamed "The Bunker" and it is easy to see why based on the stylings and shape of its exterior.  The building itself is actually made up of 4 ice pads, with the 3 community pads staying very busy, and having their own entrance on the other side of the building from the main arena.  The building is actually T shaped, with the main arena making up one line of the T, and the 3 smaller pads together on the other side.  Parking was free, and the horror stories of waiting 45 minutes to exit the lot after games have been mostly resolved for a couple reasons: they have changed the traffic flow to make a one-way circle around the building, and secondly the attendance is pretty low in Brampton so there aren't many cars exiting the lot after the action.

The Powerade Centre opened in 1998 and has a lot of modern features typical of newer arenas.  The grounds do look a little weathered for a newer building, such a some heaving sidewalks and other wear and tear, but in general it is a tidy example of a modern arena.  The box office sits inside the "Kennedy Entrance" and the concourse is very wide.  They have a very nicely done Brampton Sports Hall Of Fame on the concourse paying tribute to a wide range of athletes with ties to the community.  There is also photos of past Battalion captains along the concourse.  The concourse hallway runs in a U-shape and do not go all the way around, and there is no upper concourse above the seating area.  Once inside the main arena you see lots of purple plastic seats, also in a U-shape, and luxury suites above the seating bowl running down both sides.  The sight lines are good.  Along the far end of the arena there a only a few rows of blue plastic bench seating and a concrete wall which dons the Battalion name and logo.  High above the seats on that end is a restaurant overlooking the ice.  The capacity is listed at about 4800, and the place feels a little bigger than it is, largely due to the small crowd which was on hand.  The center ice scoreclock is small and basic, but it serves its purpose just fine.  The Powerade Centre seems like a comfortable place to watch a game, it just doesn't stand out from many of the newer arenas of its type.  The concourse provides the normal game day menu of most places, and has a nice team store.  The concourse, as well as the areas around the recreational ice pads, also had hockey card vending machines.  That is something you don't see everywhere, and indicates that Brampton is certainly a hockey town.

The game experience at the Powerade Centre was a little disappointing, but not unexpected.  I have heard stories about the low attendance and lack of atmosphere at this venue, I had just hoped it would be a little different.  The cost of playoff tickets was only $18.50 for my seat, and there were even front row seats available which were not occupied, one of which I sat in for a period.  I love the Battalion logo and theme.  What's more strong and tough than an army battalion?  The theme is played out well, but borders on being cheesy.  I love the tank that the players skate out through for intros, and I love the idea of keeping the game presentation centered around a military theme, including the air raid sirens which sound after a goal.  With only 1800 fans on hand for a playoff game it just seemed like the team went to all of the work of such a presentation without many folks in the crowd really caring.  The music during stoppages is mostly dance music, and there are a lot of give-aways to fans in the stands.  There were also quite  few folks wearing the olive green Battalion jerseys in the crowd.  They just seemed like the only ones there who cared about the game.  There were quite a few groups of youth hockey teams there, most of which seemed to not even know who the Battalion were, and as you would expect, many of them were more interested in the popcorn than the game.  The game itself was typical fast-paced OHL hockey.  The Battalion took the win 4-2 after sealing it with a late empty netter.  The Powerade Centre certainly is a enjoyable place to watch a game, it is just not the best place to experience a game and the atmosphere that many hockey arenas have to offer. Other information about the Brampton Battalion is available at:  Battalion Home

Other information about the Powerade Centre is available at:   Arena Home

More photos of the Powerade Centre are available  Here