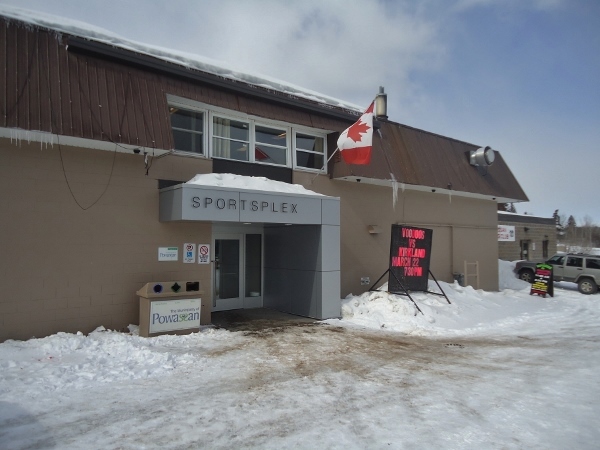 Powassan, Ontario is not the kind of destination that you end up in by accident, especially on a frigid day in March.  In fact, one would hardly guess that the tiny hamlet of around 3,000 folks would be home of a Junior A club, but, this past season Powassan welcomed the Voodos and fans have turned out in force.  Despite the town not even having a traffic light there is plenty of community support, and the military jet themed Voodos name also comes with an affiliation with the OHL's North Bay Battalion, who play their games about a half hour to the North.  The Sportsplex, as you could guess, opened in 1978, and is about as simple of a setup as you will find.  The tan concrete building has a rather flat roof and looks extremely small from the outside.  The arena sits at the end of a block of residences and next to what appears to be a ballfield, although the large open area was covered by a couple feet of snow.  Parking is present  with a handful of spaces directly in front of the building, a small lot across the street and a very small lot in the rear.  The rest of the attendees can easily park on the quiet streets of the town.  How did we end up in Powassan?  The Sunday evening playoff game against Kirkland Lake fit perfectly in our return path from an afternoon matchup in North Bay.  We are glad we didn't skip this small town venue however, as the action inside was excellent, and the energy provided by the packed house was certainly exciting.  The Sportsplex is truly a community rink, and bears a simple raised letter sign above the nondescript entrance to the arena.  Part of the roof is metal,and part is made up of shingles.  A simple, portable marquee sign announced the game time and opponent at the front of the arena.  Despite this being the first season for Powassan in the NOJHL in approximately a decade the town has had teams the league dating back to the 1990's.  The mid 2000's saw Powassan field teams in the GMHL, including teams named the Dragons and Eagles.  Like most towns across rural Canada, hockey is a big draw here and is the source of much community pride.  With the Voodoos also having success on the ice in their inaugural season the crowds have seemingly come on board to support the team.

Once inside the Sportsplex you are in the tiny lobby and greeted by a ticket seller set up at a small table just inside the door. A ticket for this playoff matchup was $12.  The lobby has just enough room for about a half dozen benches which sit behind the glass overlooking the end of the arena, a small food concession stand, and a simple merchandise table set up selling Voodoos merchandise.  The lobby filled up quickly before the arena doors opened, as fans knew the limited number of seats would fill up quickly.  Once through the lobby and into the arena itself you find a simple arrangement, with a single grandstand running the length of one side of the ice.  The grandstand is a light blue colored concrete slab, and has blue wooden bleachers affixed, and extends 5 rows high in a relatively steep manner.  There is a narrow aisle at the top with standing room and a rail behind the seats.  That's it as far as the seating goes, and the posted capacity of the grandstand is 400.  Fans clamored to find standing spots along the end of the ice and wherever they could, and we are guessing the fire code may have been broken on this evening as there were likely more fans jammed into the arena than there should have been. There was some additional viewing available in a room above the lobby which had windows overlooking the ice.  The ceiling is slightly arching and very low, adding the to small feel of the Sportsplex.  A single scoreclock sits on the end wall above the goal opposite the lobby end of the arena.  As is common in Ontario, netting covers the entire spectator area, which we are not a fan of, but is unfortunately so commonplace that venues without it seem out of the norm.  Despite the size of the arena, and lack of  amenities this place seems like the kind of arena you imagine when you picture small town junior hockey, and that is a good thing.

The gameday presentation at a Voodos game is quite professional, is perhaps a bit better than what you would expect in such a small community arena.  The game is clearly the focus of attention here, but there are some contests at intermission, and the crowd really gets involved.  There was even a small, yet vocal, contingent who made the long trek from Kirkland Lake to support their team, as this was an elimination game and someone's season was ending tonight.  The fans on hand were loud, and made ample use of cowbells and noisemakers, and the excitement level kept building from warmups throughout the contest.  The military theme of the Voodoos seems to go over well here, and the tie in with the North Bay Battalion seems quite evident, as a number of folks were discussing the afternoon OHL game which we also attended about a half hour away earlier in the day.  The similar colors and jerseys to the Battalion seem well accepted.  As playoff hockey should be, the game was incredibly physical, and every shift seemed to mean so much that the fans were glued to the action.  We haven't often experienced that level of intensity at a game, and to think that all of this occurred in a setting no bigger than your average high school arena was an amazing experience.  The Voodoos were able to secure a 6-3 victory and salute the fans, who were slow to leave the building and eager to soak in every bit of the atmosphere before preparing to do it all over again in the next round of the playoffs.  Emotion in the building was high, and as we were standing near the Kirkland Lake bench at the end of the game you could not help but feel for the players who were seeing their junior hockey career end on this night, as a few of the Gold Miners players were sobbing with dejection over the loss, as they showed the signs of battle over a hard fought 6 game series.  They would soon shave their playoff beards and go on to the next chapter of their hockey career, or perhaps see it end altogether.  The Powassan Sportsplex '78 is hardly an amazing structure of a facility.  It is simply a community arena.  What makes hockey special across Canada is that each place such as this holds its own story, and the walls of the tiny bandbox of an arena are filled with stories of successes and struggles of past teams, and with the character that each successive season of use provides.  We are glad we stopped in Powassan to experience the electricity inside the building for this matchup, and are sure that this simple arena in a town without a traffic light will continue to provide many memories for those in the area. 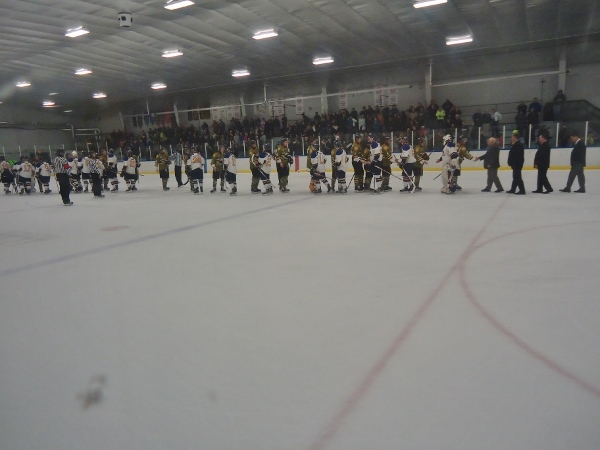 Other information about the Powassan Voodoos can be found at:  Voodoos Home

Other information about Powassan Sportsplex '78 can be found at:  Arena Home

More photos of Powassan Sportsplex '78 can be found  Here