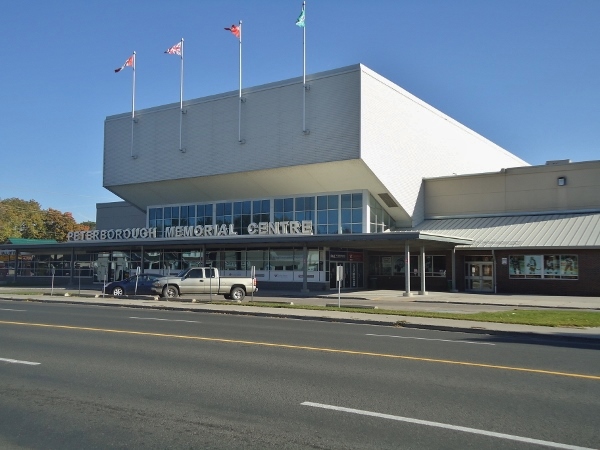 Every hockey fan has a few franchises that they hope to see in person someday.  For us, as a youngster, reading The Hockey News and the small section in the back which covered Junior hockey, the Peterborough Petes became one of those such teams. The idea of seeing the Petes skate onto the Memorial Centre ice on a cold Ontario night was something we hoped to experience someday, and thankfully something were recently able to actually do.  The Petes have a storied history as the OHL's oldest active franchise, having been in action since 1956.  The Peterborough Memorial Centre sits on the main drag in a section of town that is partly commercial, and partly residential, and is apparently part of the local fairgrounds complex.  The key identifying feature is the sloping end wall which sits above the main entrance and box office area of the arena.  A couple of parking lots flank the building to the West, and a residential neighborhood sits across the street to the East.  A mid-afternoon visit to the box office to secure a ticket for $20 also allowed time to roam around the arena to get a good look at this classic structure.  Having opened in 1956, the same year the Petes were born, the arena looks period specific, with mid-century modern block letters indicating the Memorial Centre name to identify it.  The building has the profile that can clearly be noted as an arena, and, as mentioned, the end wall is "notched out" a bit, following the slope of the end grandstand.  Although not the most pretty of structures it has that classic appeal and vibe of an old time hockey arena from its outside.

Once inside the entrance near the box office there is a team shop to the right which was well stocked with Petes gear.  There is a bit of a lobby which also features food concessions in the main entrance area as well.  The sloped wall above the box office has windows which let light onto the concourse. A free line up sheet is available as well.  A not-so-wide concourse runs underneath the seating bowl, and features additional concessions, photos and memorabilia from past Petes teams, and the best local sports hall of fame we have ever seen on-site at an arena. The Peterborough and District Sports Hall of Fame is worthy of an admission cost, (although there is none) and features tons of jerseys, photos and historical items to commemorate the success of former Petes, former Peterborough natives, and past success of the Peterborough Lakers lacrosse team.  If you go to a Petes game, or are traveling through Peterborough, a stop at the Hall of Fame is a must.  The narrow concourse does get crowded, and stops on the far end of the arena, necessitating that you turn around, rather than walk all the way around the rink.  The seating bowl is accessed via a small aisle that runs next to the ice, as well as a couple staircases which come out in the corner of the ice.  The main seating area is made up of 11 rows of maroon plastic seats on one side, and 9 rows of seats on the "club section" side .  The  end nearest the box office has what is referred to as "the balcony", but is an upper level of seating which extends an additional 15 rows upward, and offers a great view.  The far end of the arena features restaurant and VIP seating, as well as the requisite portrait of the queen, as all good Ontario arenas should.  Luxury boxes sits above the main seating area on the sides.  One cannot help but notice the plethora of banners which hang from the ceiling, and an older video board hangs over center ice.  The side seating sections feel somewhat closed in as there is a ceiling above the seats that is much lower than the ceiling over the ice.  If you look closely from your seat you can see that the ceiling is made up of wooden planks.  With all of the banners, the on-site Hall of Fame, and the general vibe of the Memorial Centre there is no doubt that you are in a classic hockey building.  The arena seems to have a personality of its own, and reminds us of how hockey was back in the glory days.

Thursday night is hockey night in Peterborough, and a good crowd came out to see the Petes play the rival Oshawa Generals.  The arena capacity is listed at 3729 plus standing room, and the announced attendance of 2300 seemed lightly reported, as, aside from the balcony section, the place was quite full.  The game is the main attraction in Peterborough, although the Petes do present the game with the usual giveaways and intermission contests.  The crowd in enthusiastic, and very knowledgeable, and also seems to be made up of an older demographic, as there were clearly more folks who are age 60-70 than there were teenagers in attendance.  The experience at a Petes game is not without its unique idiosyncrasies which you can't get at many other places.  The lower concourse aisle next to the ice actually runs right into the team benches, with the teams separated from the fans trying to find their seats by little more than a thin rope and a well placed security guard.  Home and visiting benches are on opposite sides as well.  Also, from the stands at least, the ice surface looks almost square.  The corners seem to be more of a right-angle than a curved corner, likely taking some getting used to for visiting players.  The Memorial Centre also makes sure that the lights dimmed whenever the zamboni is on the ice to flood.  The view from the end seats is also excellent, as the steep slope sits high above the ice, and offers a great view of the action, and also the rest of the crowd who are seated on the sides.  The game itself left little for the Petes faithful to cheer for, as the Generals claimed a 7-1 win.  The Petes were in the game early though, and a couple decent scraps livened up the crowd.  I certainly wouldn't call Petes fans rowdy, or overly boisterous for that matter, but they are very knowledgeable, and know when to get loud.  They also have the wonderful opportunity to watch their team play in a great building each night.  We can now understand why we were drawn to Peterborough as it is a hockey destination rather than a simple line in the OHL standing in a 25 year old issue of The Hockey News.  The Peterborough Memorial Centre has that intangible "something" that we are always looking for, from its appreciation of the past through the Hall of Fame, to its simple, yet unique layout, to its knowledgeable fans.  We enjoyed out stop in Peterborough as much as we thought we would. We are sure you would enjoy a game here too. 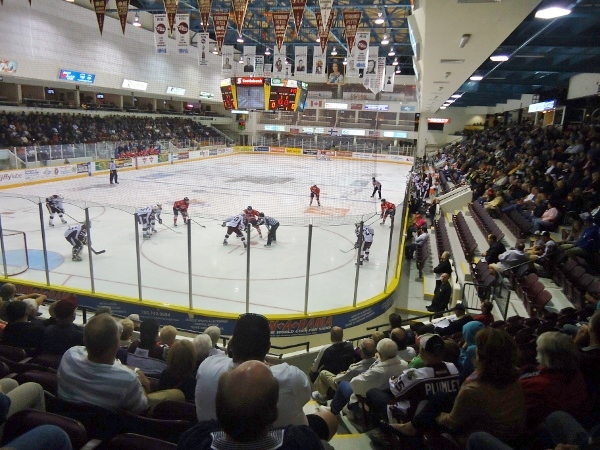 Other information about the Peterborough Petes can be found at:  Petes Home

Other information about the Peterborough Memorial Centre can be found at:  Arena Home

More photos of the Peterborough Centre can be found  Here