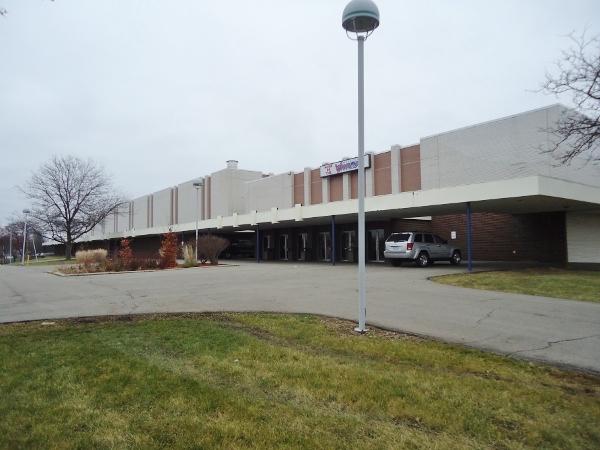 The first game of our Michigan swing was not decided on until the day before game time, as I had considered other venues, but ultimately decided to check out some North American League action in Flint.  Do you ever get a picture of something in your head, such as your favorite band during its heyday, but then actually see them and its not like you imagined?  Well this visit to Perani Arena was sort of like going to see Van Halen in the Gary Cherone era, when you grew up with David Lee Roth on vocals.  Being a season ticket holder in Elmira during the UHL days I would see the Flint Generals come to town, with their cool uniforms and tough teams.  I guess I still pictured that era in my head.  A 75% empty arena for the Michigan Warriors of the NAHL just didn't seem to measure up, but Perani Arena is a good place to watch a game.  This 1970's looking arena was opened in 1969, and has hosted hockey all but one season since, having teams in the Colonial League, the IHL, and UHL under its roof.  The arena sits prominently next to I-69, on the East side of town.  It is officially know as "Perani Arena and Event Center" and is a building consisting of 2 main wings with a lobby connecting the two.  The hockey arena area is on the South side of the building, and sits built into a hill.  The entire building is surrounded by a rather worn out parking lot, half of which is actually closed off by barbed wire and weathered chain link fencing.  If you were to approach the arena from this side you may actually think it is closed down. The arena looks small from the outside but is built into the ground.  The main entrance is atop the hill, near the lobby, and there is a marquee sign above the entrance indicating this is the home of the Warriors.  The architecture is clearly late 60's / 70's era, and is of a 2 tone brick.  I like it though as you can picture a place like this being in the movie "Slapshot".  True hockey fans still yearn to see games in buildings like this, and that is why we were there.

The inside of the arena, including the lobby and box office area are nicely maintained, yet still appear likely as they did 40 years ago.  The convention center part is off of the other side of the lobby, and appears to have once held an ice pad, and has a small seating area, but no has no ice or boards.  There are actually current championship banners for the Warriors, despite this being only their second year of existence, hanging in the lobby as they won a conference title last year.  Tickets are certainly a bargain, at $7 or $8 apiece, depending on where you want to sit.  The $4 parking charge was a little steep, but the cheap tickets more than make up for it.  Once inside the arena you find a well kept, single bowl arena with a wide concourse which circles the entire ice, as does the seating area.  Concessions are tucked in the corners of the upper concourse, and although it is hard to judge from the crowd of 800 on hand this place appears to be set up to handle the 4000 or so it holds without much congestion on the concourse.  The sight lines are good, and there is standing areas along the back of the seating bowl if you prefer.  There is no video board, and the small center ice scoreboard is flanked by colorful ads for Perani's Hockey World, owned by former Flint General player and venue namesake Bob Perani.  The odd numbered sections are all on one side with evens on the other side.  The first 6 rows of seating all the way around the rink are made up of individual metal folding chairs.  The seats at center ice are red, with the ends and corners being blue.  The seats in the upper level, which is divided by a concrete half wall, are traditional plastic seats.  There is a luxury box on the end near the entrance, known as the Blue Line Club, but it was closed for this game I believe.   This is a basic, old school hockey barn, the kind of arena I like.  Of special note is the plexi glass roof over the penalty boxes.  Like I said I pictured this place as a home of rough and tumble hockey, and clearly, with essentially a cage around the penalty box, this must have been true in the past.  I love quirks like this.

This being my first NAHL game I was not sure what to expect, but Flint being a former minor league town they have lots of between period entertainment, including peewee hockey, and a chuck-a-puck contest.  The PA is very good, and the speed and style of play was very entertaining as well.  Nonetheless when a building is more than half empty it is hard to get a great atmosphere.  The game presentation was good with one major (very major) exception.  I can overlook the merchandise stand not selling souvenir pucks, and they were stocked with some decent merchandise, but for this game the Warriors organization commited the cardinal hockey sin of not having any programs or rosters available at all.  None, not even to buy.  I always appreciate a free lineup sheet, but with $7 tickets would have no problem paying a couple bucks even for a single sheet listing the roster.  Instead you get to sit in the stands not knowing who you are watching.  I am hoping this is a fluke and I caught them on the game they forgot to print the sheets, but if this is a regular occurance this is not good.  The rest of the fan experience is good though, and although the fans don't turn out like they did for pro hockey this is a worthwhile team to watch.  The coach is former Winnipeg Jet Moe Mantha, and his son is also a defenseman on the team.  There are rumors all around the internet that the Warriors may not be back next year, thus my decision to attend a game in Flint while I can, but I can say that this was decent hockey, and the game was entertaining.  There was a good scrap in the first period, and the Warriors easily handled Kalamazoo, winning 5-2.  For $7 you can't go wrong with skilled hockey played by kids that hustle, some good entertainment, and a fun old school arena.  Just don't expect David Lee Roth to play at intermission. 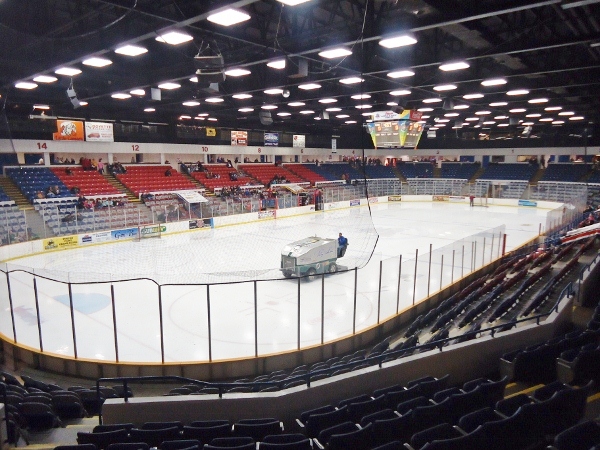 Other information about the Michigan Warriors is available at:   Warriors Home

Other information about Perani Arena is available at:  Arena Home