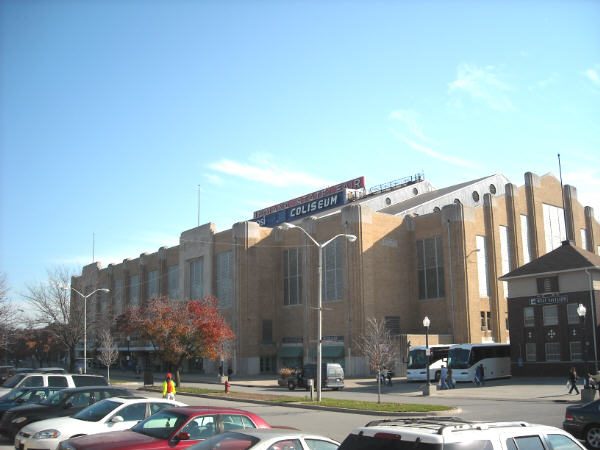 Believe it or not attending a game at the Pepsi Coliseum was the main reason for my midwestern trip.  Why? Well, I love old arenas and this place certainly qualifies as old, having been constructed in 1939.  Furthermore year after year there are rumors of the Pepsi Coliseum losing its team to cross town arenas like the larger Conseco Fieldhouse, or even the much smaller Pan-Am Plaza.  I didn't want to miss out on a chance to see hockey at this old barn, so I was Indy bound.  The Pepsi Coliseum is part of the Indiana State Fairgrounds complex, therefore it has all the hassles of other arenas situated on fairgrounds property.  On this date there were several events going on on the grounds, including a Christmas craft show, which had the parking lots jammed.  The arena really stands out in its exterior styling as the brick exterior also features large windows.  The roof also sports lighted signs indicating the name of the building.  Sadly the arena is almost impossible to view from afar as other nearby fairgrounds buildings are crowded around it.  You can get a decent view from the sidewalk across the street, and that sidewalk runs between the arena and the large grandstand for the famous Fairgrounds Speedway Mile which hosts dirt track racing annually as well as other events.  The fairgrounds does sit in a rather run down area on the north side of town, so that is probably why there are constant rumors of moving the team to other venues.  The place is neat however and you don't see arenas like this very often any more.

I swung by the arena a few hours before game time to check this place out, and got to go inside the building for a look around as there was a midget hockey tournament going on.  I wanted to purchase my ticket while I was there, but was told the ticket office was across the street in a different fairgrounds office.  I secured a good seat near center ice for $14.  The entryway does feature the old time box office with the small windows with iron bars, and is used just before game time.  Everything about this place is old, but that is not a bad thing.  Although hockey has not been played continuously since 1939, the arena has had its fair share of teams, including the Indianapolis Checkers of the old IHL.  Walking around the concourse, which goes all the way around the arena, you can feel as though you are in a time warp as the place is definitely old.  There is a team store which is outfitted in one of the rooms on the outside of the concourse, and there is a skate shop like any good arena should have.  Once inside the seating area you feel like almost all of the seats are far from the ice, but the sight lines on the side of the rink are not bad.   There is no center ice scoreboard, but rather 2 seperate scoreboards, one on each side of the ice at the top of the seating area.  This is a set up I cannot remember seeing before.  A look around the place reveals the history of the old barn, with IHL championship banners.  Oddly enough there is a banner for #99 Wayne Gretzky who played 8 games for the Indianapolis Racers of the WHA, although that team played at the old Market Square Arena in a different part of town.  Indy is proud to have had the Great One in town for a little while I guess.   The ceiling is rather high and peaks over the middle of the ice.  You can tell the building was not built primarily for hockey though as there is a lot of extra space on the floor of the arena.  I have read that the ice surface is actuall 215 feet long, but I cannot confirm that.  Behind each goal is what appears to be 30-40 feet of open space before the grandstands start. There are makeshift seats in place on the ends, but I can't imagine that the view from there is very good.  The arena seating capacity is listed at 8,200 for hockey, but most of the seats on the  ends are blocked off with tarps, leaving mainly the seating on the sides.  The USHL version of the Ice, although drawing good crowds, can get away with having everyone seated in the middle.  The building is showing its age however, as there are quite a few broken seats, and a layer of dust over almost every surface.

Although the building is very old there have been some attempts at updating the place.  There is a video board on one end of the rink, and what they refer to as a "party deck" under it.  I am not sure that the updates really fit in with the stylings of the buildings, and I could have gotten by just fine without the video board, but they are trying to provide enough creature comforts to draw some fans.  Attendance for this game against Fargo was reported at over 3,900, although the crowd looked smaller than that.  The game presentation at the Pepsi Coliseum is typical, and the crowd seemed to have a good time.  I loved the old time feel of the place, and enjoyed my first USHL game.  I wasn't sure what to expect with the USHL as I have enjoyed major junior games in Canada immensely, and thought the USHL was a decent version of junior hockey, and good enough to draw some fans.  I often have questioned why the USHL has the full cage rule for players under 18, and figured it might be weird seeing half the players with full cages and half with visors, but I didn't mind it at all when 2 of the younger players decided to drop the gloves and also ditched their lids before fighting.  Sadly in Canada taking off your helmet will get you an extra penalty now.  What is the world coming to?  I also want to comment on is the unique set up with the zamboni parking at the Pepsi Coliseum.  The zamboni actually parks on the arena floor, between the boards and the grandstands.  Yes, most of the end seating is covered with tarps, I just found it odd, and rather unique that the zamboni was sitting there is full view for all to see for most of the game.  The only time it was not there was when it would go across the concourse to dump the snow.

The game itself was a barn burner and a heartbreaker at the same time.  The Ice took an early lead, and even led 5-3 in the third period.  Fargo got 2 goals to tie it up, then Indy scored an apparent goal with only a short time left to take the lead, only to have that goal waved off for a man in the crease.  Fargo then scored with less than 2 minutes left to take the 6-5 win.  The home town crowd was ticked at the officials to be sure, but the game was enjoyable.  Sure the Pepsi Coliseum is old, run down, and not in the best part of town.  That's OK though as it is a virtual museum to how hockey was in the old days and putting up with the inconveniences is worth it to experience a game here.

Other information about the Indiana Ice is available at:  Ice Home

Other information about the Pepsi Coliseum is available at:  Arena Home

More photos of the Pepsi Coliseum are available  Here