"Hockey Town Canada".   It is not a title to take lightly, and the small city of Pembroke, in the Northern Ottawa Valley, not only is officially designated as Hockey Town Canada, it largely lives up to the name, with hockey as a central part of the culture in this town of 16,000 folks.  We have had a strange infatuation with attending a game at the Pembroke Memorial Centre for a few years, largely springing up out of the Lumber Kings recent streak of CCHL championships, as well as their RBC Cup national championship in 2011.  The Pembroke Memorial Centre is exactly what you think of when small town junior hockey comes to mind.  This iconic barn was even used in a Gong Show Hockey promo outlining the The Junior Lifestyle.  This classic barn opened in 1951, and has not changed a whole lot in the over half-century that it has hosted hockey.  The arena is built into the side of a hill, only a block away from the shores of the Ottawa River.  The squarish concrete building has a flat roof, and weathered sheet metal siding which is white, brown, and tan.  There are a pair of entrances.  The upper entrance requires a short walk down a couple flights of concrete steps to the entrance door, which has a marquee sign declaring the Hockey Town designation, and has a box office and lobby inside its doors.  The lower entrance is on the end of the building and is accessed from the main parking lot which flanks the arena on its lower side.  A simple "PMC" painted logo adorns the siding on the building is a bright blue, with the "C" looking like a Pac-Man ready to chomp on a ghost.  The weathered and simple exterior simply adds to the charm of the great arena, and gives a little hint that the inside will be just as classic as the exterior.  Nice touches to the exterior include a couple of hand painted murals, one of which features Pembroke's former arena, the Mackay Street Arena which was open from 1905 through the Memorial Centre's birth in 1951.  It is always nice to see cities pay tribute to their former arenas, as the arena can play such a large part in local culture and a town's identity.

Uniquely, the PMC has 2 separate box office areas. The main one is at the upper entrance, but fans can also enter through the lower entrance and purchase tickets for the game at a lower box office.  A ticket for this Friday night contest against the Ottawa Junior Senators cost $12.  Sunday night is the traditional hockey night in Pembroke, with the Lumber Kings taking to the Memorial Centre ice nearly every Sunday night.  This Friday night game was special however as it was "Sheldon Keefe Night" and their former coach, who led the team to 5 straight CCHL titles and brought a national championship to Pembroke a couple years ago, was back to raise a banner in his honor.  The arena itself is about as traditional as it gets, with a wide upper concourse running all the way around the ice.  The interior is also corrugated metal siding just like the outside, and the most notable feature is the red, old-style, 2 person wooden benches which make up the seating on the sides of the arena.  There are 7 rows of seats, in a U-shape.  The end of the ice away from the box office entrance is glassed in and allows for folks to sits and watch from an enclosed area.  The seating on the near end of the arena are still 7 rows high, but the seats have been removed and replaced by wooden planks which are painted white.  Roof support pillars jut up from the 5th row of seating.  The layout is not atypical from other buildings you would find built in the 1950's.  Capacity is listed at 2250, so no matter where you are in the arena you are very close to the action.  Standing along the concourse fills up fast, and some of the spots are obstructed by the roof supports.  Concessions can be found on the upper concourse in one corner, as well as in the lower hallway of the arena.  The Memorial Centre has a low ceiling, but there is still an older center ice scoreclock, which has individual bulbs which make up the numbers on the clock.  The glass is also very low, adding to the old-school feel.  The concourse features tributes to former Lumber Kings players as well as former Pembroke natives who went on to play in the NHL.  The team benches are on opposite sides of the ice, and the arena has such a classic feel to it that it seems to have a personality of its own, giving the Lumber Kings a clear home ice advantage.  It is arenas like the PMC that make the travel,time, and expense of running Roaming The Rinks all worth it.

The gameday presentation at a Lumber Kings game is professional, yet maintains the small town feel which seems so appropriate.  The PA is loud, although has the tinny sound of an old fashioned arena.  There are contests at intermission, including a fan shot contest and a chuck-a-puck contest.  There was even a video presentation for this game due to the ceremony for coach Keefe.  This was very nicely done, and used a temporary screen stuck to the glassed-in end seating area.  This was likely only for this special event, but was a nice touch.  There is a merchandise table in one corner of the concourse selling Lumber Kings gear. The fans and arena staff are very welcoming, and very humble when discussing the great barn that their team calls home.  The announced crowd was 1250, but the arena seemed nearly full, and the fans were into the game.  The action on the ice is clearly the centerpiece of the presentation in Pembroke, as it should be everywhere.

The atmosphere at the Pembroke Memorial Centre was electric for this game, largely because this is such a great arena, with such a strong tradition, but also because Sheldon Keefe was back in town for 1 night to greet the fans and receive honors for his success as team coach.  Keefe was not only the coach, but also the team owner.  Sheldon Keefe did all of this at a very young age as he is still in his 30's.  With Keefe's current team, the Sault Ste. Marie Greyhounds playing in Eastern Ontario over the weekend the Lumber Kings  chose this date to honor the coach.  A 45 minute pregame ceremony actually had the crowd on their feet.  You could hear a pin drop as former players and local residents recited their memories of Keefe's time at the helm of the Lumber Kings.  A video presentation harkening back to the RBC Cup title run brought lots of emotion back to the arena.  The banner raising and presentation of the key to the city of Pembroke were a culmination of the ceremony.  The OHL's Soo Hounds even skated onto the ice to honor their current coach.  After this the crowd sang along loudly as "O Canada" was played.  We can only imagine how exciting it must have been to be in attendance at Lumber Kings games when they won 5 straight CCHL titles.  The game was a good one, although Ottawa took a 5-4 shootout win, somewhat spoiling what would have been a perfect night in Pembroke.  We had high expectations for the PMC, with its recent tradition of excellent teams, and the history that a barn from he '50's can provide.  We were not disappointed.  From warmups, to the ceremony for Sheldon Keefe, to the final shot in the shootout we thoroughly enjoyed the classic hockey vibe at this old barn.  As we left the Pembroke Memorial Centre after the game, and after speaking with some team officials and locals we could help but think "This is junior hockey". 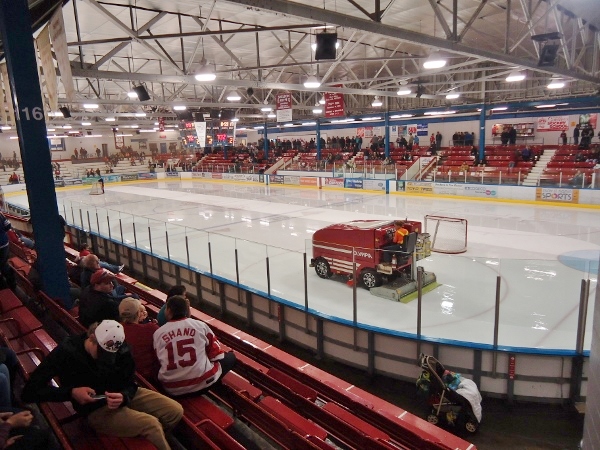 More photos of the Pembroke Memorial Centre can be found  Here