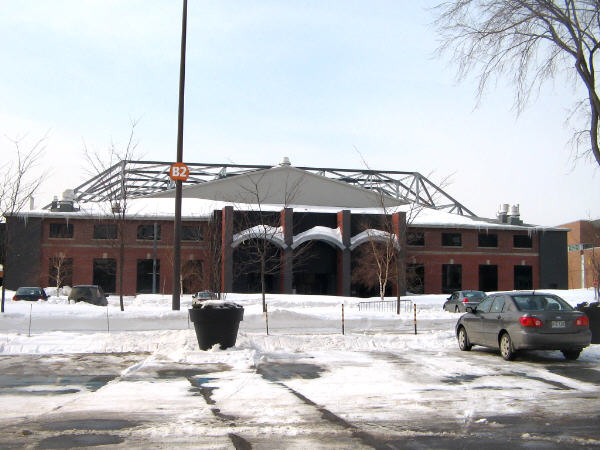 I was super excited for this trip as my favorite league in the whole world is the LNAH, the toughest minor league hockey on the planet, which also happens to be centered in the Province of Quebec.  Tonight's game featured the Radio X, Quebec City's team, which up until this year called the Pepsi Colisee home, but is now playing in the smaller Pavillon De La Jeunesse, which sits on the same Expo grounds as the larger arena, on the site of the original Colisee which burned down.  I was immediately taken aback by the traffic in the Quebec City area, and am not sure if I caught the area on a bad day or if this is the norm, either way I would recommend allowing extra time to get to the game if you plan on going.  Despite the 8pm start traffic was still bad in the area as it took 47 minutes to go the 1.6 miles from the hotel to the arena.  Part of the problem may have been the amount of events going on on the Expo grounds at once as there was horse racing, as well as an auto show in addition to the hockey game.  I ended up parking in the parking lot for the more famous Colisee and walking the several hundred yards to the Pavillon.  Parking was $7.  If you are wondering about the name Radio X, the teams in the LNAH are generally named after sponsors.

I had read that this building underwent a major renovation before this hockey season, and that is clearly evident from the exterior of the building.   Despite being a pre-war building the exterior and facade look very modern and seemingly out of place.  The building is more than sufficient for this league however as at 5000 seats it is among the biggest.  Upon entering you are in the box office area.  A local flagged me down and was able to sell me an extra ticket of his.  The face value of the ticket was $12.50, but thanks to his son's good English skills and my lack of conversational French $10 ended up being a good deal for both of us.  After purchasing my ticket I was able to walk the lower concourse and visit the Radio X merchandise store where I picked up a jersey before having to have my ticket taken to enter the seating area of the arena itself.  Once inside you are greeted by a large open seating area with only 1 level of seating.  Seats are a gray color and the modern plastic type.  The most obvious thing you notice is that this rink has Olympic ice, yet they have a high tech contraption in place on one side with metal braces which buttress the boards of the regulation size rink in use for this game.  It is odd however as you can look down and see the white ice still behind the boards, and in between the boards and the seating area on one side of the arena.  If you look closely you can see the 2 pieces of the boards removed from the larger rink which are stacked up on one end.  This set up may exist elsewhere, but this is the first time I have seen it.  There is a typical center ice scoreboard, and well as a good PA pumping out the usual music during stoppages.  In addition to the lower concourse underneath the seats there is a standing area/concourse which runs across the top of the arena behind the seats, but does not go all the way around as the center sections have luxury boxes of sorts at the top.  Basically  to walk around the arena in between the blue lines you need to use the lower walkway, but on the ends you can walk around the top.  There is also an upper concourse behind the seating area at the top of the arena with food and drink concessions.  The odd numbered sections are across from the benches with the even sections on the same side as the benches.

The views are decent from most seats, but not as good on the side where the boards are pushed in from the Olympic ice as it seems like you are farther away from the action on that side. All seats are elevated however, so even a front row seat is at the top of the glass.  The seating on the ends and side with the benches offers a better view, although one of the few reminders of the age of this building is evident on the ends as there are roof support columns toward the bottom of the seating on both ends, limiting view depending on where you are sitting.  In my trip to Quebec the previous year for 3 LNAH games at different arenas I was immediately in love with the atmosphere and passion of the fans and the overall feel that you get at the games.  I am sure I caught this Radio X game on on off night as the game was a real snoozer, without a single fight.  There was a rather sparse crowd of a couple thousand who also seemed rather bored by tonight's action.  Both teams had the majority of their tough guys scratched, so at that point I kind of figured it would be a dull game.  I will say that I am completely impressed with how the crowd handled the lack of passion from the players.  Despite the Radio X taking a 4-2 win the home fans booed non-stop for the entire final 5 minutes of the game, showing their displeasure at not seeing any rough stuff.  Yes things are different in this league as the fans expect a show for their hard earned money, and this league generally delivers night after night with multiple fights per game the norm.  I told new friend Simon Fortin, the video guy for the Radio X, that fans in the states would be perfectly happy with the game as the home team won, etc.  Not in Quebec however as the players are expected to entertain as well as win.  That's my kind of fan reaction!  Overall it was neat to get to such an old historic building, despite little evidence of the rink's past.  This is a fine enough place to watch a game, with enough quirks such as the makeshift smaller ice rink to keep arena fans happy.  I am sure if you catch a Radio X game here you will be treated to the rough stuff that I missed out on as well.   Catching  at least 1 LNAH game is a must for any hockey fan as it is so different that the U.S. minor league games. 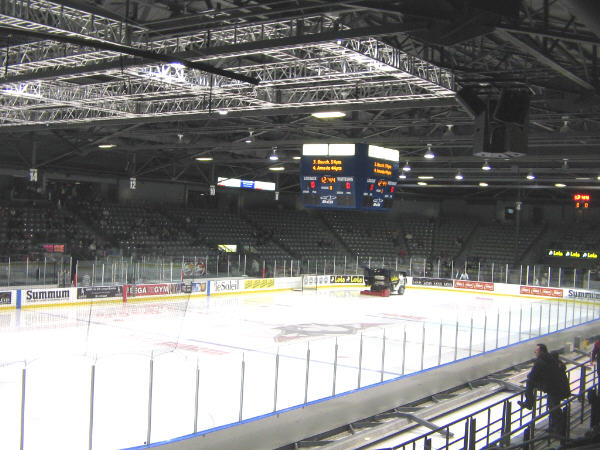 Other information about the Quebec Radio X is available at:   Radio X home

Other information about the Pavillon De La Jeunesse is available at : Venue home