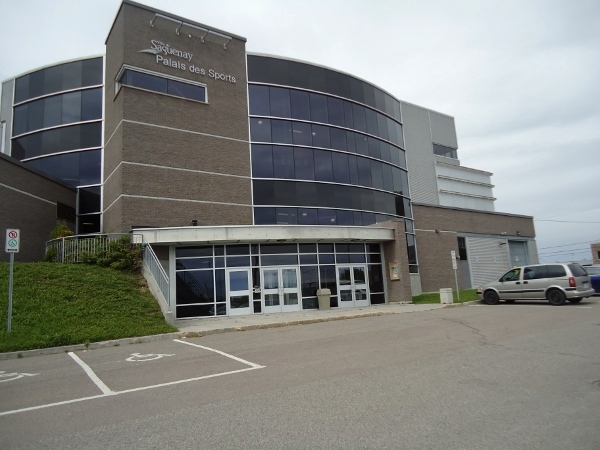 Although the Saguenay region is isolated from the rest of Quebec by at least 100 miles of wilderness in every direction the area is blessed with a couple of really good historic, yet recently renovated, arenas.  The Chicoutimi Sagueneens of the QMJHL play a mere 10 miles away from Jonquiere, and the fans also have an LNAH team to support here at the Palais des Sports.  In fact, we were able to take in a game at both places on the same day, with the Marquis game being a night cap after the matinee contest in Chicoutimi.  The Palais des Sports is an old arena, having opened in 1948, but it has a modern look thanks to 2005 renovations, which saw the addition of a lobby and new entrance on one end, as well as the addition of luxury seating on an upper level.  Tucked in a residential, area parking is a little tight around this arena, and despite this being a preseason game there was quite a bit of fan support.  The modern lobby features a glass facade and blue tinted glass along with a gray concrete exterior.  The rest of the building has an older look, and features gray concrete on the lower exterior of the arena, with metal siding giving it a bit of an industrial look.  A noticeable feature is the concrete supports which extend from the roof along the outside of the building. The tops of these support pillars are also clad in a silver metal siding.  In addition to the new lower lobby entrance there is a nondescript side entrance which leads to the concourse and box office area.  Overall the arena has a classic look, and the shape seems more modern than you would expect from an arena that opened before 1950.  We grabbed our $12 ticket early in the day before heading to Chicoutimi for the Q game.  The concourse and box office area also have a modern look, and we were intrigued by the colorful statue of a hockey playing chicken that hangs from the ceiling above the lower lobby entrance.  We were not able to track down any information on the history of this skating poultry statue,but thought it was neat, and something that you might only find in Quebec.  The arena, although not huge, has a big-time look to it, and seems very well maintained.

Once inside the arena itself the outer concourse only extends along the one end of the arena.  The seating bowl circles the entire ice, and you immediately notice how dark the interior of the arena seems.  The lighting is kept low, and the 9 rows of dark maroon plastic seats don't brighten up the arena one bit. The place has a great vibe though, and looking up at the ceiling you will find wooden planks painted a dark brown.  The exposed metal rafters are also painted a dark brown, magnifying the overall dark feel.  The walls of the concourse are basic cinder block, and there is a fairly large setback between the front row of seats and the ice, allowing for an aisle to walk except for at center ice where the benches are.  As with the rest of Quebec the benches are on opposite sides. The ice surface features lots of ads and has an almost European look to it.  A basic, small scoreclock sits above center ice, and seems like an appropriate fit for this old barn.  There is an upper concourse which stretches around the entire arena above the seats, and, with standing along the rail, the capacity of the arena is listed at 3500.  The newly renovated end features a concession stand and restaurant, and hanging from the end wall above there is a section of luxury seating.  Banners paying tribute to the Marquis recent LNAH titles hang from the rafters on one end, and the sight lines in the arena are good from just about anywhere, although the exposed roof columns do block the view from some of the upper rows.  The Saguenay Palais des Sports is a throwback of a building that has been renovated enough to be more than functional in the modern era.  It also seems to exude character which you can feel as soon as you enter the building.

The game day presentation at a Marquis contest is professional, yet uniquely LNAH style.  Fans are here for entertainment, and they get that, along with a very skilled level of play.  We were impressed with the fan participation during the playing of "O Canada" as nearly everyone stood and was quiet, whereas we have attended other LNAH games where at least half of the Francophone crowd did not even acknowledge the playing of the anthem.  The fans in Jonquiere get into the game and are loud.  They love to chirp the opponents, and give their support to the Marquis with their airhorns. The PA is loud. Wicked loud. That just seems to fit in with the way things are presented in the LNAH though.  The game was typical of the LNAH, featuring 6 fights, long square-offs, and a few other altercations that garnered roughing penalties that would be given a fighting major in any other league in the world.  Players trash talk and gesture at each other and the fans eat it up.  Jonquiere took a 4-2 win over Trois-Rivieres, and fans were treated to victory and lots of physical play.  The LNAH is all about heroes and villains, and if this preseason game is any indication they will be treated to lots of entertainment.  The presentation of the game is basic, and features no intermission activities at all.  Beer sales are brisk, and the beer girls roll a cart around the aisle between the stands and the ice during play to get more sales.  Fans can also get some Marquis merchandise from a table and some clothing racks set up near the entrance on the outer concourse.  A crowd of only 900 or so was on hand, but for preseason the fan support seemed impressive.  It's been a few years since we have seen an LNAH game, but it is certainly one of the most entertaining leagues in all of hockey, and is the closest thing to the movie Slap Shot that you could possibly experience in today's world of hockey.  Experiencing things like Sean McMorrow's first time back on the ice after a 2 year long prison sentence seem almost movie-like,but really do happen in the LNAH.  We love this league, and think it is an absolute must-experience for any hockey fan's bucket list.  Taking in a game in the old-school, yet updated confines of the Palais des Sports would be a great way to get your first taste of the toughest hockey league in the world, or would make a great stop if you have seen the mayhem that is the LNAH at other venues throughout the league. Other information about the Jonquiere Marquis can be found at:  Marquis Home

Other information about Saguenay Palais des Sports can be found at:  Jonquiere Arena Home