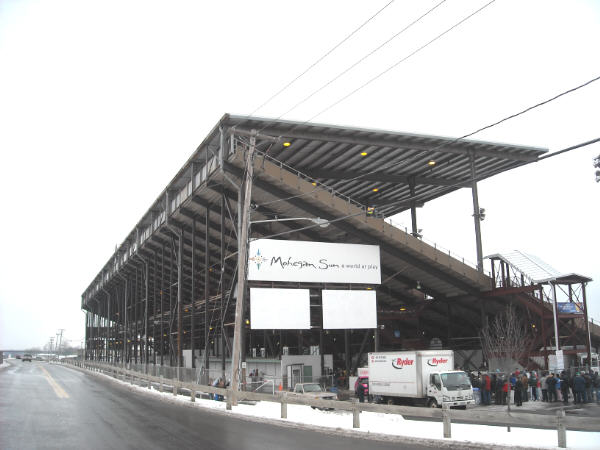 This day of hockey started like many others for me.  I grabbed my Syracuse Crunch Jon Mirasty jersey and loaded some things into the car, only things would be a little different for this game.  First I would actually be seeing Mirasty play, a luxury I only get 1 or 2 times a year.  Secondly I would have a bunch more layers under my jersey as this game was outside.  Yes, I said Outside!  When I got wind that the Crunch would be hosting an outdoor game I was pretty stoked.  When they announced it would be at the Fairgrounds rather than at a baseball stadium I was even happier as that meant the seating would be closer to the rink.  I ordered my tickets ahead of time, and although they cost $40 I was counting the days until February 20th.   Billed as the Mirabito Outdoor Classic the game was sponsored by an upstate New York oil company.  I rolled into Syracuse plenty early and was met with a huge, unorganized mess of a traffic jam once I got off the exit for the Fairgrounds.  It took almost an hour to go the last 3/4 of a mile to get into the property and get parked. Inexcusable in my book, but I finally made it with time to spare well before game time.  Part of the delay was that they were collecting 10 bucks a car to park, and didn't have nearly enough staff doing so.  Oh well.  Sadly the traffic pushed the start time of the game back a half hour and still some fans missed some of the game.  Those that did get there early were certainly living it up with all the tailgating going on.

The New York State Fairgrounds is a huge sprawling complex which houses many exhibition halls, another hockey arena, the Coca Cola Coliseum, which housed Syracuse minor league hockey for decades, and the 1 mile dirt oval where the game was actually held.   The rink was set up on the front stretch of the track, known as the "Moody Mile" which holds the annual Super Dirt Week event which is one of the highest paying short track races in the country. How do I know this?  Not wikipedia, but rather the fact that I have been involved in dirt racing for years, and have taken the wheel of a dirt modified myself, although not at Syracuse.  Seating was in the large grandstand, which is listed as holding 16,000 people, and it was packed.  There was also VIP chairback seating set up next to the rink in the infield of the track, and a set of bleachers on each side of the VIP section.  There was also one other grandstand which was set up at the turn 4 end of the rink, but was at least 150 feet away from the ice.  As with any outdoor game there were not a lot of "good seats", but from my vantage point near the top of the grandstand near one goal line I could at least see what was going on, save for the obstructions from 2 grandstand support poles and 1 pole for the track lights.  Overall they did about as good a job as possible with the rink layout.  I usually could care less about having a video scoreboard, but the Crunch brought in 2 very large mobile screens, one at each end, and they were appreciated.  Although fan amenities were basic they were sufficient, although another issue which arose was the restroom situation.  The plumbing to the grandstand and concourse is shut off in the winter as the facility is generally unused, so they brought in a bunch of porta-potties.  The lines however were of epic proportions, with what I would guess to be over 500 people in line for the bathroom at any given time.  There was a good PA system, and a generally fun atmosphere.

As for the game presentation you should figure there would be a bunch of pregame ceremonies, and most of it was rather cheesy, such as introducing former NHLers, and other celebrities.  The national anthem was well done with a huge flag brought out to center ice by an honor guard.  They did have a few things going on in the infield such as ice sculpting, and a fan tent where there was a live band playing before the game, adding to the "big event" atmosphere.  The snow covered area between the end of the rink and the large general admission grand stand turned into a place for snowball fights.  Gametime temps in the low 30's were not too bad, although a stiff wind did make things chilly at times.   In general the atmosphere was fun, with everyone standing for the entire duration of the game.  For that matter I saw a lot of things today which I have never experienced at a hockey game before.  I saw a skydiver land at center ice before the game.  I could sit in my seat in the grandstand and actually see  the traffic backed up for miles.  I even experienced the PA announcer and crowd noise being drowned out by a passing freight train as the back of the grandstand sits about 150 feet from train tracks.  My favorite non-hockey moment of the game was being a part of the 20,000 or so fans giving a welcoming round of boos to New York Democratic Governor David Paterson. That made my day.  I was rather bummed that there were no programs or lineup cards available, and the souvenir selection was pretty lame, with most of hit having the logo for the game, which mainly featured the sponsor's name.  There was no Crunch merchandise for sale at all.

The game itself was OK, with the Crunch taking a 2-1 win over Binghamton despite a whistle happy ref.  As far as I was concerned I got my money's worth after the first 4 minutes as I got to see Jon Mirasty and Jeremy Yablonski go toe-to-toe early in the first period.  Oh, and I became a part of history as the crowd of 21,508  shattered the old AHL attendance record.  The ice held up very well, with no extra stoppages needed to repair the ice, although there was a crew handy with a water bottle and a fire extinguisher at just about every break. Obviously the ice was rather slow, but it seemed fine given the circumstances. I had a great time overall, and the early afternoon start left plenty of time for me to drive the 2 hours to Elmira to catch the Jackals in action that night.  Was the game worth the 40 bucks for a ticket and the aggravation that came with the traffic and parking?  Probably not, but is it something I would have wanted to miss out on?  No way. 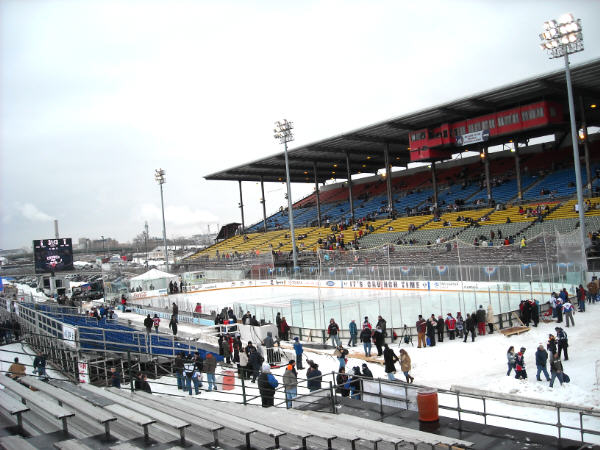 Other information about the Syracuse Crunch is available at:  Crunch Home

Other information about the New York State Fairgrounds is available at:  Fair Home