When the OHL's North Bay Centennials left town in 2002 many thought that the city of North Bay would not see another shot at hosting major junior hockey.  The North Bay Memorial Gardens is a grand representation of the arenas built in the 1950's, having opened in 1955.  This rather utilitarian looking facility also played host to the Nipissing University Lakers, and more recently the NOJHL's North Bay Trappers, but a 2013 renovation to this old facility paved the way for the OHL's return.  A new glass facade and entryway was one of the upgrades, as was an enlarged ice surface, making the arena regulation size.  Seats were also added to one end, as well as some luxury suites and a nice center ice video board.  Nonetheless, the Memorial Gardens retained its old skeleton, and provides the backdrop for a truly fun Canadian hockey experience.  Upon first approach this square building appears quite large, and the glass facade, although only a couple years old, fits in nicely with the period architecture, giving it a mid-century modern look.  Gray and tan brick, and brown sheet metal siding make up the rest of the exterior, and the building has a square profile and flat roof.  There are parking lots flanking the arena, which sits a couple blocks off the main drag and in a somewhat residential setting.  Although it was late March, winter keeps a strong hold on North Bay as snowbanks and cold temperatures were evident for this Sunday afternoon matchup against Kingston.  A small digital marquee sign sits in front of the main entrance.  A modern box office sits just inside the main entrance and a $19 ticket up high in the corner was secured for the game.  Although the Battalion kept their logo, name, colors and theme upon their move north from Brampton, the troops seemed to have been welcomed with open arms by the fans and are accepted as a part of North Bay culture now.

Once inside the entrance to the arena you are on a wide concourse which runs underneath the grandstand.  Concessions are available at various stands, but the arena concourse walls are also filled with memorabilia from not only the city's hockey past, but its general history as well.  A very large North Bay Sports Hall of Fame sits at one end of the arena concourse, with hundreds of plaques paying tribute to local athletes ranging from hockey players, to pro wrestlers, high school sports standouts.  A small Battalion team store sits on the corner of the concourse near the Hall of Fame area.  The concrete concourse floor and brick walls give the arena a definite old school feel.  Metal pillars also rise from the concourse floor to the roof, adding to the old fashioned look of the place.  The concourse on the other side of the arena dead-ends at the team dressing rooms, and also does not go all the way around on the end as fans walk in front of the end seating which was newly installed to access the far side of the ice.  The seating bowl itself also has an old school flair to it, with a large grandstand on each side, made up of 15 rows of red and blue plastic seats.  There are a couple of rows at the glass level which are made up of gray plastic seats, but the main grandstand sits back about 20 feet from the ice and is elevated a bit.  Newly installed seats on one end are part of the recent renovation, with a large, steep grandstand on aluminum risers providing additional seating, also made up of blue plastic seats.  Luxury boxes sit above the grandstand on one side, and a restaurant seating section sits on the end near the Hall of Fame.  Like any good Ontario arena a portrait of the Queen sits above the goal on the restaurant end.  The seating layout finds the odd sections on one side of the ice and the even numbered sections on the other.  The building is not without its quirks, as the upper rows on each side have views of the scoreboard obstructed by a huge horizontal roof support truss.  There is standing way up high at the back of the grandstand which does not have the suites, and that area, along with the top few rows, have a feeling of being up in the rafters.  The old school feel continues with the brick accent wall next to the restaurant area, and the wooden ceiling.  A press box is perched in the roof support structure and must provide a truly bird's-eye view of the action.  Exposed metal rafters hang over the ice, and a large, modern video board dangles over center ice, adding a modern touch.  Overall the setup at the North Bay Memorial Gardens is truly one out of the 1950's, with quirks, some obstructed views from the seating, and an old style square grandstand arrangement, but this just makes watching a game here seem nostalgic and a throwback to the way things were decades ago.

The game day presentation and atmosphere in North Bay are an odd mix of modern and classic.  This being the final regular season game, graduating players and their parents were honored on the ice before the game.  For a rather meaningless game at the end of the season a huge crowd of almost 3700 filled the arena, which now has a listed capacity of 4246.  If you have attended a Battalion game in Brampton then you have experienced the traditions and presentation methods used in North Bay.  The entire military theme was transported north, including the inflatable tank, the skating mascot Sarge, and the sound effects during the game.  We thought this might come across as having a "borrowed" feel to it, but the folks in North Bay have truly embraced the team and its traditions.  There are promotions and giveaways, and some ads played on the video board, but in Brampton there was hardly anyone in the stands to see it, whereas in North Bay there is a packed arena of fans to be played to and feed off of.  Fans in North Bay cheer for the peewee hockey at intermission and clamor for the T-shirts tossed into the crowd by Sarge.  Here, there are enthusiastic fans who know the game and take their role as a 6th skater seriously.  The fans in North Bay are loud, and the flat ceiling magnifies their cheers.  Sure the North Bay Memorial Gardens are not perfect.  Sight lines are decent, but not great, and the top 1/3 of the side grandstands can't see the center ice scoreboard, although TV's above each section to provide a view for fans.  Getting around the arena when there is a large crowd is a bit cumbersome, with 30 seats in a row in each section fans have to climb over one another to get up at intermission.  The North Bay Memorial Gardens does have one thing which overcomes all of the minor inconveniences of the arena layout.  This place has character and charm and the arena itself, and the crowd contained within it, have the ability to make a simple, rather meaningless regular season game on a Sunday afternoon at the end of March have the feel of a playoff game.  We were pumped up by the energy level inside the building, and had to wonder why such a wonderful arena went without an OHL team for over 20 years.  Although the Battalion have only been in town for 2 seasons it seems as though they have been a part of the community for decades.  With the troops taking a 6-0 win they were saluted by the fans after the game as many fans stuck around for a bit, discussing the upcoming playoff matchups.  It is cities like North Bay, and buildings like the North Bay Memorial Gardens that define what the Canadian hockey experience is, and no large suburban setting or cookie cutter style modern arena can compete with the classic, hockey-centered cultural experience that one gets when attending a game here. 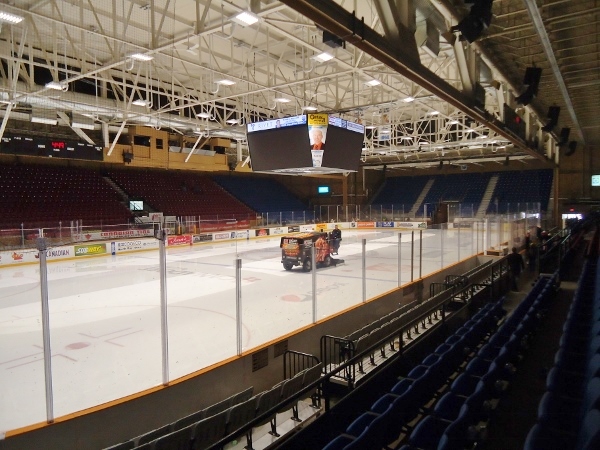 Other information about the North Bay Battalion can be found at:  Battalion Home

Other information about North Bay Memorial Gardens can be found at:  Arena Home