Hey- what's that giant igloo over there?   Oh wait, it must be one of those inflatable athletic domes.  No, it looks more like a golf ball half buried in the ground.   In actuality it is the Murray Athletic Center, home of the Elmira College Hockey team.   The entire facility is actually made up of 3 such domes, and the others house basketball courts and other athletic facilities.  Built in 1973, this complex actually sits quite a ways away from the campus, which is in downtown Elmira.  From campus you take Route 14 north about 8 or 9 miles.  The complex sits back off the road quite a ways and is marked by a nice marquee sign in the Elmira College gold and purple colors.  After taking the access road back about a 1/4 mile you are at the arena.  The school website declares this building to be the "the world's first geodesic dome athletic complex".   I'll take their word for it.  Parking is free and on site in lots next to, and across from the building.   To locals this place is simply know as "The Domes".

EC fans take their hockey seriously, and they have a good following for a division 3 school.  Admission is 5 bucks, and after you enter through the door in the middle of the 3 domes you walk through the hallways to the dome that is furthest west, as that one houses the ice rink.  When you first open the doors into the rink you are in a hallway behind the upper seating area.  The concourse runs all the way around the arena at the top of the lower seating level, and behind the upper bleachers.  The ends are open with no seating.  The lower seating area has about 5 rows of plastic chairs.  The upper area where most people sit consists of very large fold out bleachers.  Because of the dome shape of the ceiling the center bleachers extend up higher that the ones near the end zones.  The seats offer a decent view.  The lighting is quite odd as there are light poles which extend upward, but are still below the ceiling.  I would describe them as similar to the lighting you would find at an outdoor stadium, yet still indoors.  There are quite a few shadows on the ice and a dull feel to the lighting.  The end area near the front of the building has a souvenir counter, as well as a food concession, featuring a limited menu including the "Dome Dog".   There is a more complete menu available by going back out into the hallway to the center dome near where the tickets are sold and grabbing some food at the main concession stand there.  The good part about the smaller food stand is that you can still watch the game while getting your food.  The seating capacity is listed at 3200, and even with a smaller crowd the sound echoes through the whole building.  Also the fans enjoy stomping on the wooden bleachers to get the team going.

The experience of attending an EC game is a blast.  The crowd really gets into the game, although the student section is quite a bit smaller than most schools as the rink is so far away from campus.  Oddly enough the First Arena in downtown Elmira is within walking distance of the campus, and a nice facility, but due to the politics involved the Eagles still play their games in the Domes north of town.  The speakers are all on the far end of the rink, and due to acoustics from the shape of the roof can get quite muffled.  The game presentation is quite good with music during the stoppages and a chuck-a-puck contest during the second intermission.  You will hear quite a few cow bells here as well.  There is also a booster club lounge on the lower level on the end nearest the front of the building.  I believe they serve beer there and they have a very small bleacher where the booster club members stand and watch the game from.  Whenever the Eagles score there are a pair of kids who run all the way around the concourse with giant EC flags waving from the end of hockey sticks.  They are all decked out with purple and gold clothes and purple wigs.  The team has historically been quite successful, and I am told that attendance in the 90s was often near capacity.  Since the Elmira Jackals started up in town in 2000 the crowds have been lower.  I only moved to the area at the end of 2005, so I cannot attest to seeing any full houses at the Domes, but I have seen the place more than half full on a couple of my half dozen visits, including this visit vs Potsdam State.  Having the team ranking #1 in the nation for Division 3 at the time probably helped the crowd as well.   Because of the uniqueness of the building a trip to the Domes is a must do for hockey fans.  And at $5 you can't go wrong. 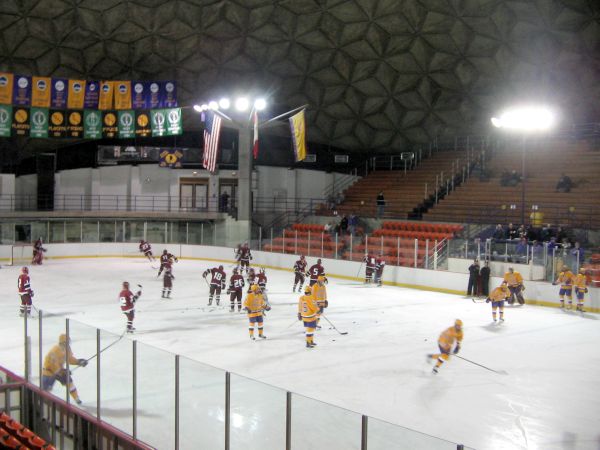 Other information about Elmira College Hockey is available at:  Soaring Eagles Home

Other information about the Murray Athletic Center is available at :  Arena Home

Other photos of the Murray Athletic Center are available Here