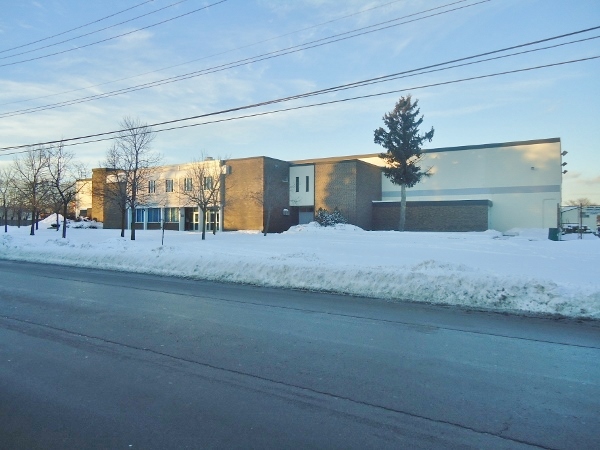 The blue collar city of Hamilton is best known for its heavy industry and rust belt designation, but Hamilton has quite a bit of success when it comes to hockey as well.  The city has seen Memorial Cup and Calder Cup banners raised, and Dave Andreychuk Mountain Arena is an overlooked piece of Hamilton's hockey history.  With the 1980's era Copps Coliseum being too large for AHL or OHL level hockey, yet Mountain Arena being too small the city struggles as a place in limbo without an appropriately sized building.  The OHL did call Mountain Arena home for periods of time over 30 years ago as temporary measures for the city's franchises, and the arena is currently home of the OJHL's version of the Hamilton Red Wings.  The arena is a non-descript facility which sits in a residential area a block off of the main drag on the South side of town.  The arena is a basic cinder block building with a brick entryway facing the street.  A digital marquee sign sits on the front lawn, and trees also dot the front lawn area, which was under over a foot on snow on this cold December day.  Built in 1966, the architecture is rather unappealing, and has the look of a school or office building from the front.  Viewing the building from the end reveals the familiar outline of a community arena, made up mainly of pale tan cinder blocks.  The roof line is only slightly pitched.  A driveway entrance to the street sits are each end of the building, with a small, but sufficient, parking lot at the side and rear of the building.  The arena sits next to a city park as well.  The brick and glass main entry to the arena was added in a 2006 renovation, and sits at the rear of the building.  A simple raised block letter sign sits on exterior wall of the lobby designating this as the Dave Andreychuk Mountain Arena, named after the Hamilton native and 23 season NHLer.  Dave Andreychuk Mountain is a simple building, and likely an afterthought to many Hamilton residents, but there is still high quality hockey played here thanks to the Red Wings.

Monday night is hockey night for the Red Wings as the majority of their home games take place on Monday evenings.  Entry into the lobby provides access to the concession stand, a ticket and 50/50 table, and access to both ice pads, as there is a second pad set up for figure skating and devoid of boards and glass.  A $10 ticket is inline with other OJHL buildings.  The lobby is well kept and there is some signage and murals paying tribute to Andreychuk and his outstanding career.  To access the arena itself you go up one of a pair of staircases and come out on the concrete concourse which runs all the way round the arena behind the seating area.  The first thing you notice is the dreaded protective netting covering the entire seating area.  Looking past that flaw you find an old school barn, which seems essentially unchanged since the mid 1960's.  Six rows of blue plastic seats circle the ice all the way around, and no matter where you sit you are close to the action.  The low ceiling and small rectangular center ice score clock magnify the feeling that you are in an old fashioned, intimate little arena.  There is standing all the way around on the concourse.  The concourse walls are painted white with red stripes in keeping with the Red Wings theme.  Oddly the standing area on the corners features dasher boards and glass that you stand behind, likely put there for wheelchair access, but this is an odd feature.  Even more odd, and we are not sure if it is intentionally so or not, is that the corners of the concourse are sloped badly away from the outside of the building and toward the ice.  It is as if the walkway around the arena has banked racetrack style corners.  When we first saw this we thought it was a defect and that the concrete must have settled (which it may be), but all 4 corners have the same slope, although some to a lesser degree.

The more you look around at Mountain Arena, the more quirks you find, as the arena also features iron dividing railings which separate grandstand on the side of the ice behind the team benches from the rest of the seating.  There are gates on the concourse which are swung open to allow access to this side.  Above the brick lobby toward the street is a shuffleboard court, which can  been seen through a window when walking along the concourse.  A simple open pressbox sits above the concourse where the entry from the lobby is.  Adding to the old school feel of the arena is the fact that the boards themselves are made of heavy wooden planks.  They surely have no give at all to them.  The plastic seats may not be original as there are a handful of wooden seats which sits in the corners in a couple spots in the top row.  The lower hallway of the arena allows access to washrooms, but also to the locker rooms.  Bright red walls adorn this hallway, and the walls are covered with press clippings, newspaper articles, and photos from teams of the past.  There are even photos of a young Dave Andreychuk in his minor hockey days in Hamilton.  There are so many photos and articles on these walls it would take more than the duration of intermission to see it all.  Oddly though, there don't appear to be too many photos or memorabilia on the walls from any time during the last 20 years.  It is as if time stood still, the walls got full, and they stopped adding more items to the walls.  Although the entire experience at Dave Andreychuk Mountain Arena is a step back in time, a stroll down the lower hallway feels like a trip through a museum that you are not supposed to have access to.

The gameday presentation for a Red Wings game is polished, but very basic.  A very good PA system and good PA announcer fill their roles well.  The crowd is kept informed, and a decent selection of music is played during stoppages.  The crowd is mainly an older crowd.  Monday night games do not usually make for a large crowd of young fans.  A crowd of only around 200 fans were on hand on this frigid December night for this matchup against the Georgetown Raiders, a far cry from the 2,500 capacity that the arena is listed at.  Nonetheless, the action was good, and that is what the fans are on hand for.  You won't find any intermission contests at a Red Wings game, and the arena is very cold, so most fans head back down the stairs to the lobby to warm up between periods.  There was no merchandise for sale, and the crowd was mainly old-timers who have likely been attending games here for years, and some family and friends of the team.  You won't find many cowbells or crazy chants here, but you will be in the presence of many experienced fans who have a great knowledge of the game.  The netting makes an annoyance while watching the game, but the classic setting and layout of the arena make up for it.  All of the action takes place with a mural of Andreychuk overlooking one end of the arena.  The Red Wings started fast taking a 1-0 lead into the first intermission, only to have the wheels fall off and give up 5 straight goals to Georgetown.  The game was entertaining however, and a decent fight, and near brawl, added to the excitement that these hard working Junior A players always provide.  The Red Wings are certainly not the main hockey attraction in town, with the AHL's Bulldogs playing a mere 3 miles down the road.  Although it may not be the main hockey destination in Hamilton Dave Andreychuk Mountain Arena's history, nearly unchanged setting, and its old school feel make it a worthwhile stop for hockey fans. 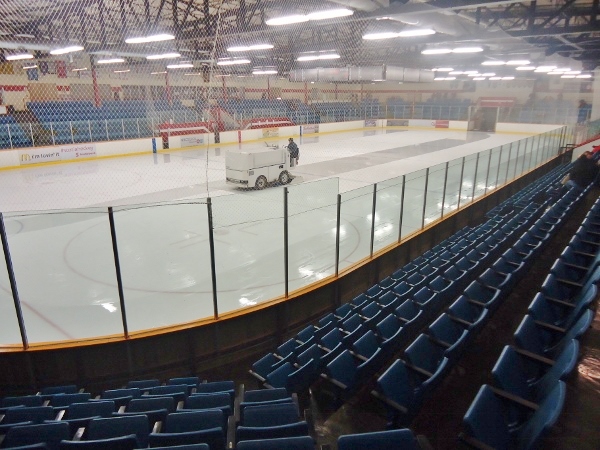 Other information about the Hamilton Red Wings can be found at: Red Wings Home