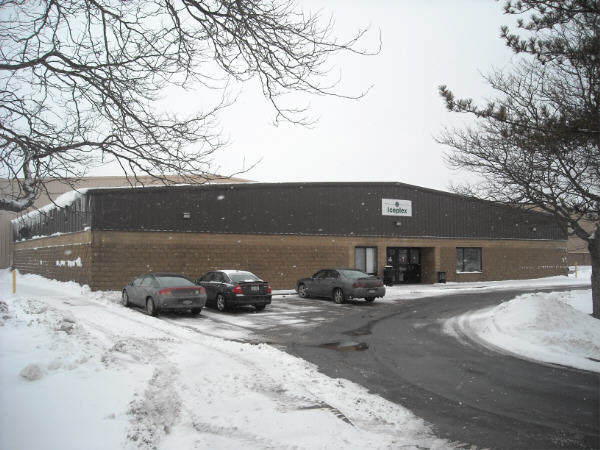 After taking in an afternoon game at nearby Colgate University it was off to the small town of Morrisville for some SUNY hockey.  Morrisville State just entered the SUNY conference this year after joining NCAA Division 3 play as an independent last year.  Previous to that the Mustangs apparently had a storied history as one of the top junior college programs in the country.  The arena sits on a hill on the campus, overlooking the small football stadium.  I was not too familiar with this school prior to going to this game, but it appears to be a school geared more toward ag and tech students.

The Iceplex itself is little more than a rec rink.  It does feature 2 ice pads and a proshop as well as a snackbar which features subs as the main menu item.  Despite the spartan facilities I liked this place a lot.  Admission for the game vs Western New England College was a mere $3. Two bucks more got you a small program/lineup card.  Once inside the arena itself you quickly realize this is a bare bones facility.  There are about 12 rows of bleachers on one side, and they are made of wood planks on metal uprights.  Creature comforts are improved some somewhat as there are space heaters hanging from above the seating area keeping the fans warm and toasty.   Rest rooms are in the lobby.   I thought the bleachers offered good sight lines.  As for the game presentation- It was basic at best as there was music during warmups and stoppages, and a few announcements from the PA announcer plugging sponsors in addition to reading the goal scorers and penalties.  It did appear as though the PA announcer was new at this- or at least I hope he was as he had trouble reading the names and sponsors, and seemed generally unorganized.  The press box hangs off the wall above the benches and penalty boxes, all of which is on the opposite side of the arena from the seating.

For a rink on campus I expected a little more raucous crowd, as there was little student support for this game.  I did enjoy the game itself quite a bit however as both teams played hard, the view of the action was good, and that is all you can really ask for. The Mustangs took a 3-1 victory. I think in about 2 more seasons Morrisville State will be giving the SUNY front runners a run for their money as they appear very well coached.  I really like the small barns, and had a good time here.  The sign on the wall says the maximum capacity of the arena is 1500 people, although even with standees on the end I doubt the capacity to watch a game would be even that much.  If in the area check this place out, it is a fun change from some of the bigger arenas. Other information about the Morrisville State Mustangs is available at: Morrisville hockey home

Other information about the Morrisville Iceplex is available at : Iceplex home

More photos of the Morrisville Iceplex are available Here