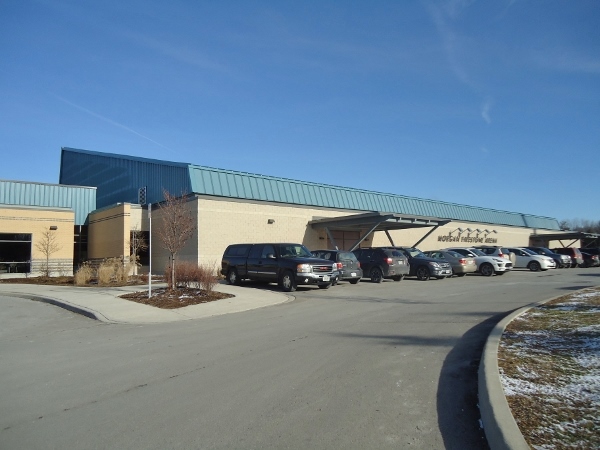 The hockey scene in the greater Hamilton area is a bit of a crowded one, with teams in the GOJHL, OJHL, AHL, and the Allan Cup Hockey league all fighting for the hockey spectator dollar.  The southwestern Hamilton suburb of Ancaster joined the fray in 2013, with the GOJHL's Ancaster Avalanche becoming the new name of the relocated Stoney Creek Warriors.  Morgan Firestone arena sits in a park-like setting in a residential area, and is the town's community centre.  This arena opened in 1993 and is named for a local equestrian legend.  The facility underwent renovations in 2011, and served as the training camp home of the Erie Otters at that time while Erie Insurance was undergoing a major renovation itself.  Morgan Firestone Arena has parking at both the front and rear of the building, and sits in the same complex as other athletic facilities.  The building exterior is made of tan cinder blocks, and has a blue metal roof.  There are actually 2 ice pads on site, and a simple raised letter sign sits on the exterior wall.  Entry into the building is through a set of doors at the middle of the complex. One half of the building houses the gym and meeting rooms, on the other side of the lobby is the pair of ice rinks, one of which is the main arena that the Avalanche call home.  A ticket for our second GOJHL game of the day (we saw the London Nationals play a Saturday afternoon game a couple hours earlier) was $10.  After purchasing a ticket we were advised that before the game against the Niagara Falls Canucks would be the "replay" of the final 6 minutes and 52 seconds of a game played earlier in Niagara Falls which was protested because a goalie was ejected for an improper match penalty. What this essentially meant was that we would be getting bonus hockey for free, and have a chance to see the teams battle for 4 points this evening.  No objection about that here.  Morgan Firestone Arena is a no frills facility, but the people of Ancaster seem pleased to have Junior B hockey played in their little corner of the Hamilton metro area.

Once at the ticket table in the lobby of Morgan Firestone Arena you can see through a glass wall into the arena itself.  Sharing the lobby with the ticket table is a basic snack bar concession stand and 2 rows of plastic seats which overlook the ice from behind the glass wall.  A door takes you into the arena itself, and you immediately notice the high ceiling and blue metal rafters.  The arena actually has the profile of an arena much older than its 1990's lineage.  The seating is all on one side and made up of 10 rows of steeply pitched maroon plastic seats.  In keeping with the Avalanche theme the metal railings are all painted the pale blue which matches the team colors.  A walkway in front of the grandstand leads to the stairway aisles, and in front of that is a single row of seats right on the glass.  The front row of the grandstand itself is elevated about 5 feet above the aisleway, providing a good view.  Unfortunately, as is all too common in Ontario, netting covers the entire spectator area.  The benches and penalty boxes are across the ice from the grandstand, and the player dressing rooms are underneath the seats.  There are lots of banners from Ancaster youth hockey on the walls behind the benches. A single scoreboard sits on the end wall opposite the lobby.  The building seems to have a bit more character than many of the 1990's era concrete community arenas, as a narrow aisle runs atop the grandstand with a rail which finds some fans standing there as well.  There is a quirky pressbox in the corner at the end of the grandstand, and it has a small window which provides the vantage point for those in the pressbox.  The number of seats is listed at 900, but, with standees and those watching from the lobby seats or along the glass, we would guess 1200 fans could cram into the arena if need be.  Despite having a definite community arena feel the view is good from the seats and the arena certainly is sufficient for a solid Junior B level fan experience.

The gameday presentation at an Avalanche game is pretty laid back, yet all business.  There are no promotions or fan contests here.  The game is the main attraction, or in this case the game and makeup part of an earlier game.  The Avalanche started the makeup game down 5-4, and ended up losing.  With a decent number of fans on hand from Niagara Falls there were some cheers when this took place.  The announced attended on only 120 fans was pretty accurate, so there was not a ton of noise or cheering in the stands.  Niagara Falls took a win in game 2 by a 2-1 margin as well, although the action was fantastic and a great scrap fired up the fans that were on hand.  The atmosphere at Morgan Firestone, at least for this regular season contest, was that you would expect at a community arena with a relatively small crowd on hand.  They even closed the concession stand after the first period, although we are guessing that was due to scheduling issues as with the makeup time and an additional flood of the ice the regularly scheduled game was taking place on a later timetable than anticipated.  Those fans that were on hand clearly were happy that the Avalanche offer a high level of hockey at an affordable price, saving the local fans a drive into Hamilton itself to watch some entertaining hockey.  We enjoyed our stop in Ancaster, and certainly enjoy taking in junior hockey in some of the smaller communities.  Morgan Firestone Arena is the right size, and in a good location, to host Junior B hockey, one of our favorite levels of the game to enjoy.

Other information about the Ancaster Avalanche can be found at:  Avalanche Home

Other information about Morgan Firestone Arena can be found at:  Arena Home

More photos of Morgan Firestone Arena can be found  Here