Designed by well known Michigan Architect Alden Dow, and having opened in 1960, McMorran Place Arena has been a mainstay in the Midwestern hockey scene since shortly after its opening.  The brick square that is the arena is a part of the larger McMorran Place Sports and Entertainment Center, which includes a second ice pad, a theater, and the iconic tower which is an observation point overlooking the city of Port Huron, the St. Clair River and Blue Water Bridge which connects Port Huron to Sarnia, Ontario.  The tower is only open in the summer, but looks like a neat way to get a view of the area.  The heyday of Port Huron hockey may be in the past, and establishing stability in this market has been tough.  The list of franchises to call McMorran Place Arena home include:  the Wings and Flags of the IHL; the Clippers of the AAHL; the UHL's  Border Cats, Beacons, and Flags; the new IHL's Icehawks; and more recently the junior hockey franchise of the NAHL's Fighting Falcons.  Despite the turnover of teams there has always been a small core of die-hard hockey fans in Port Huron.  The arena is showing its age, but the simple brick exterior is appealing to look at for hockey purists, and the teal green tile accents and old time marquee board give it a throwback feel.  You get the impression that it could have been in the movie Slap Shot.  Everything about the setting screams "old time hockey", and the blue collar nature of the town seems to be the perfect host for such a building.  Having the city be in the shadows of the bridge that connects with Canada make it all the more appropriate.  The is nothing fancy about McMorran Place Arena, but its simplicity and 1960's architecture make it a great way to experience hockey much like it was enjoyed in the past.

The interior of the arena is as basic as the outside, with a lower concourse with brick walls running down both sides of the arena underneath the seating area.  There are concession stands on each side and a pro shop which also sells Falcons gear.  A glassed-in box office sits in the middle of the concourse just inside the main entrance.  A ticket for this playoff matchup against the Michigan Warriors, the rival from an hour up the road in Flint, was a reasonable $11.  The main seating area is accessed up a set of stairways which leads from the street-level concourse to the main grandstands.  There are 13 rows of old fashioned wooden seats with orange metal frames running down each side of the ice, and they are elevated approximately ten feet above the arena floor.  The rake of the seats is steep, and the sight lines are great.  There are is minimal seating on the end, save a couple rows of seats which runs along the front of the concourse aisle on one end.  There is additional seating at ice level, with 3 rows of folding chairs in some areas behind the low glass, and a section of bar seating which is directly next to the ice and features tables and stools.  There is an older, individual bulb scoreclock above center ice, and much of the arena appears likely as it did in the 1960's.  Additional viewing is available at ice level on one end as fans stand up against the glass and watch the action from there as well.  Despite its age, McMorran Place Arena is a comfortable place to watch a game, albeit not a modern one.  The seats have a lot of legroom and offer a great view.  The seat section numbering system finds the odd numbered sections on one side of the ice, with the even sections on the other.  One odd feature was the clear plastic freezer strips which hang down at the stairway entrance from the concourse, much like you would find at the walk-in beer cooler at your local beverage store.  We have never encountered that before.  There are banners and retired numbers on the end walls paying tribute to the history of the franchises that have called Port Huron home.  A pair of pressboxes are located above the grandstand, with one being known as the Mike Emrick Broadcast Booth as the famed announcer started his career calling IHL action for the Port Huron Flags in 1973.  The arena holds a lot of history, and the design and stylings of the building hold true to its 1960's roots.

The gameday presentation for the Fighting Falcons game is professional yet not over the top.  The PA is loud and the PA announcer enthusiastic.  The fans are boisterous, and although not huge in numbers, there were enough of them in this building that seats 3400 to make for a fun atmosphere.  Add in the fact that quite a few Warriors fans made the trek from Flint and you had a solid, excitable crowd.  The ice surface of McMorran Place Arena is small, at 185' x 85', so the on ice action is physical, and the playoff atmosphere made this an exciting game.  There are things for the fans to do, such as a chuck-a-puck contest at intermission and there were fan giveaways where fans could fill out contest entry forms at the fan services window, which overlooked the ice on one end.  The concession prices are more than fair, and the fans seem to really appreciate having a team here since there has been so much turmoil and turnover in the past with different franchises and different leagues occupying the building throughout its history.  There was a general feeling of uncertainty about the Falcons themselves as rumors of the team disbanding or moving were running rampant.  We get to see games at a lot of arenas, and each season there is one game that seems to stand out as the most memorable game of the year.  Despite driving over from London, Ontario that afternoon, waiting in line for an hour and a half to cross the border, and dealing with traffic, this was certainly the most memorable day of the hockey season.  The game itself was flat out awesome.  How does a scoreless playoff game through 2 overtimes sound?  Yes it was a nail-biter and was intense.  Despite over 100 minutes of scoreless hockey there was hitting, action, great saves and intensity which one rarely sees in modern day hockey.  At the 5:37 mark overtime number 3 the Warriors scored the loan goal to take the win.  We did not expect a 4 hour and 15 minute game when we left London that afternoon, but could not have enjoyed the action any more, as it was truly hockey the way it was meant to be played.  McMorran Place is an arena that is supposed to showcase hockey.  With its low glass, wooden seats, small ice and great sight lines it allows fans to experience hockey in a setting similar to years gone by.  This game had such a classic fell that you can almost picture it happening in the1970's  with Mike Emrick giving the play-by-play call from high atop the arena in Port Huron. 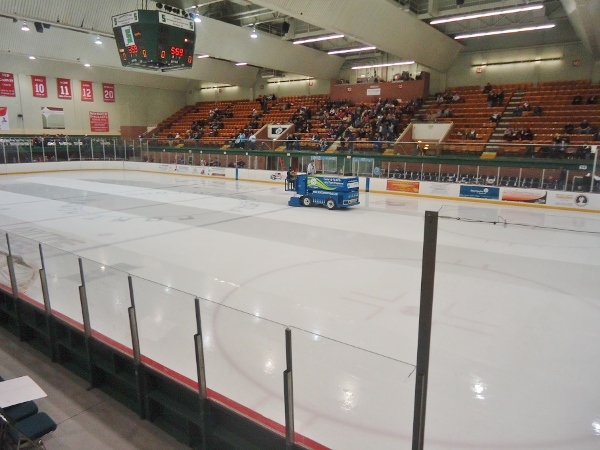 A box score of the game can be found   Here

Other information about the Port Huron Fighting Falcons can be found at:  Team Info Page

More photos of McMorran Place Arena can be found  Here