High on a hill overlooking the Liberal enclave known as Ithaca, New York sits one of the most fun buildings you could possibly attend a hockey game at- Lynah Rink.  Originally opened in 1957 this classic barn sits right on the campus of Ivy League school Cornell.  Ever since I moved to the area in 2005 people were telling me I needed to catch a game at Cornell- at least if I could score a ticket.   This place packs in a capacity crowd of over 4200 just about every time there is a game.  Luckily I was able to secure a single seat for this February game against Quinnipiac.  Boy am I glad I did.

Although the building itself is 50 years old when first approaching the entrance and box office area things are somewhat deceiving as the rink is actually attached to the newer Bartels Hall, which houses many of the other indoor sports facilities for the campus.  You know you are in Ivy league country when those facilities include a Fencing Salle.  The concessions and rest room facilities are located in the hallway area in Bartels hall, and all appear very modern.  Walking to the left down the hallway you enter through the doors to Lynah.  You enter at the top of the seating area on the end of the arena.  The seats extend around the 3 side of the rink in a squared off horseshoe design.  To get to the seats on the sides you actually go down a hallway behind the top of the seats which looks like just about any other hallway in a school building or college campus.  There is a newer message board type scoreboard on the end without seats, and above that is a single row of seats which I understand was just added in a recent renovation.  These seats must be awesome.  The zamboni door sits below those seats, and aside from a single concession stand in the one corner of the building above the seating area that is pretty much it for Lynah.   The place is little more than a sheet of ice with stands on 3 sides.  There is not even a center ice scoreboard.   The place is all business.  A bunch of banners hang from the ceiling commemorating the schools prior hockey success.  The seats are simply wooden benches without backs, and they are clearly worn and weathered with age.  You dont really have to worry about comfort however as you dont really end up sitting in your seat for any of the game anyway.  My ticket ended up being right in the middle of the student section.  Although my few gray hairs and my age set me apart from the college crowd I am up for a challenge, and these kids can cheer with the best of them.  From the pregame visiting team introduction where everyone reads the paper in disinterest to the other chants and heckles that go on by the Lynah crowd this place must surely be a nightmare for a visiting team to play at.   They also heckle the opposing goalie so badly that it must be impossible for the goalie to block out the fans.

Tickets for the games are $18.  At first I thought that was pretty steep for college hockey.  After experiencing the game it was definitely worth it.   I have never seen a more organized, yet enthusuastic crowd as this one.  I was somewhat caught off guard when the entire building stood quietly during the first couple stanzas of the National Anthem only to be rocked awake when over 4000 people shouted the word "RED"  when the song came to "the rocket's red glare"  portion of the song.  A cheesy salute to the Big Red?  Perhaps, but I loved the dedication everyone has to it as I was probably the only one in the building not in on the plan.  The chants and cheers and heckles went on all game like this, and if you dont leave with a sore throat and no voice you must not have been paying attention.  The pep band also keeps thing entertaining and is probably the part of college hockey which I think the rest of the hockey world is missing out on the most.  Imagine a pep band at a minor league or junior game!  That would be a blast.  The cheers go on all night, including repeating the names of the goal scorers and assist makers as the PA announcer announces a goal.  Cornell took the win and the jingling of keys and a hearty "Warm up the bus" chant kept the crowd busy right to the end.   This place is a classic for the atmosphere, and a must see for any hockey fan.  Just do your homework on trying to secure a ticket, and rest your voice before the game. 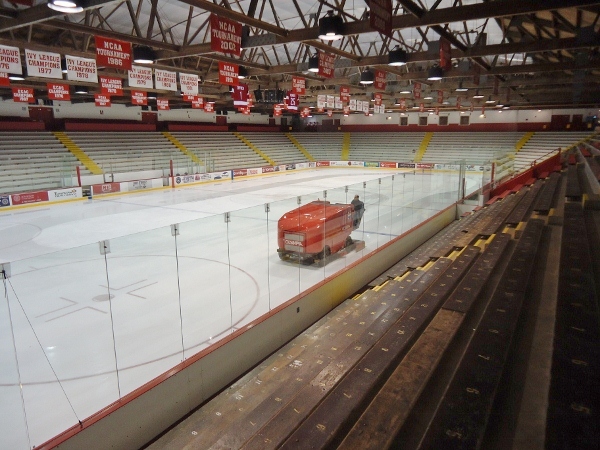 Other information about Cornell Big Red Hockey is available at:   Team home

Other information about Lynah Rink is available at:  Arena home

Another useful site for getting ticket and ticket exchange info:  ELynah.com