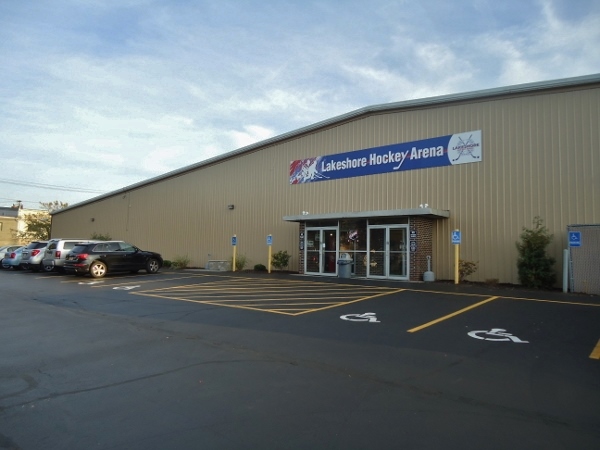 When you think of hockey in Rochester Lakeshore Hockey Arena is not the first venue that comes to mind.  Honestly, it is not in the first several arenas you would think of.  With the Rochester area having the AHL, NCAA Division 1 and 3, and the USPHL's Junior Americans all within a short proximity the Roc City Royals seem to fly under the radar.  The second year club which competes in the NA3EHL does provide another opportunity for folks in the area to enjoy hockey.  Built in 1972, this simple community arena sits on the north side of Rochester, closer to Greece and Irondequoit than it is to downtown Rochester.  The area is a mix of older commercial buildings, and residences, and the nondescript tan metal-sided building could easily be mistaken for a warehouse as you drive by.  The large building has a sizable paved parking lot adjacent, and has a low roof and small sign above the doorway indicating the building's purpose.  The arena is officially known as Lakeshore Hockey Arena, and we like the fact that they go with the "hockey arena" moniker rather than the traditional "ice arena" name.  Make no mistakes about it though, this place is a heavily used twin pad facility and serves that purpose much more than being a spectator venue.  The property is well kept, and just inside the main doors is a lobby.  The lobby area has signage advertising the Royals presence, and there is a pro shop off to the left and a snack bar area off to the right.  The Royals play in the East Rink, which has quite a bit more seating than the other rink on the premises.  Although the exterior of the arena makes the building look low and sprawling the interior is spacious enough, and the listed seating capacity for the arena is 900.  The arena is showing its age a bit, and certainly could not be considered state of the art, but the simple design harkens back to type of facility that many of today's pros started out their youth hockey days at.

Tickets for the Royals games are purchased just inside the entrance to the East Rink, and cost a reasonable $5.  Once inside the arena itself you notice how dark everything is.  The lights are dim and the seating is made up of brown wooden bleachers which run the entire length of the ice on one side. The bleachers are made up of 7 rows near the ice then a flat concrete slab which runs behind the bleachers in between the 2 ice pads, and has additional sections of bleachers set up on top of the flat slab which provide an additional 5 rows of seating.  The most noticeable feature of the arena is the sloping, huge, metal roof support beams, which are painted white and slope away from the grandstand to the far wall behind the team benches.  The ceiling is quite low as you get closer to the far side of the ice.  The glass around the arena is low, which we usually think is a good thing.  There is however the dreaded netting protecting the entire spectator area from flying pucks and obscuring the view of the ice a bit as that type of setup normally does.  You can tell that much of the structure and amenities have been in place for decades, and the dasher boards are still made up of solid wood around the ice surface.  A pair of simple scoreboards provide information about the game, and hang above the goal on each end of the ice.  There are banners on the end wall of the arena paying tribute to the high school programs which call this arena home, as well as to the several youth hockey programs who have had past success here.  The sight lines are actually decent from most places, and despite this being a September game you can tell they keep things cold inside at all times as it was quite cold inside the arena, which is not a bad thing when watching hockey.  Lakeshore Hockey Arena is hardly the most comfortable place in the world to watch a game, and the whole place looks as though it could use a good scrubbing, but it serves its purpose just fine, and offers area patrons a decent place to enjoy hockey.

The gameday presentation at a Roc City Royals game is very laid back, and strictly focused on the on-ice action.  With the Royals in their second season they are still trying to establish themselves as a team which can get local support.  A crowd of 150 or so was on hand to watch the action.  There is music during the stoppages, and the starting lineups were introduced. After that the PA system was used for goal announcements only, as not even penalties were announced.  Intermission features no activities at all, and the clock is stopped while the ice is resurfaced and most fans head to the lobby to warm up a bit.  There is no Royals merchandise for sale and not even a program or roster sheet available.  We also noticed how things appear to be a rather stark white inside the arena, as the boards are mostly blank, the zamboni is a plain white color, and the Royals jerseys, although featuring a hint of purple and gold, are also plain white.  The NA3EHL was a solid league last season after the independent Northern States Hockey Leagues was renamed and came under the banner of the NAHL.  This season, possibly due to the limit on the number of foreign players that teams are allowed to sign, rosters have been small on some squads in the league.  Roc City took to the ice with only 12 skaters, although a few other players were scratched and sitting in the stands.  The New York Aviators out of Brooklyn easily handled the Royals taking a 7-2 win.  Lakeshore Hockey Arena does have a bit of charm and some quirks which make things interesting, including a ton of pucks hitting the ceiling causing a stoppage in play.  Being a second year club the Royals have not built up much of a tradition yet or any sort of fan rituals which are noteworthy.  The quality of the hockey is certainly decent and well worth the $5 admission charge.  Like many Tier 3 junior programs in the Northeast the presentation seems to not really be spectator oriented and the teams are satisfied to take the ice and play the game in front of the small crowds who show up rather than have many fan promotions or other activities which take place on game night.  Lakeshore Hockey Arena would not be your first choice if you are in the Rochester area looking for a game to attend, but at least its presence, and the fact that the NA3EHL generally provides a decent on ice product, gives fans another option when looking for their hockey fix.

Other information about the Roc City Royals can be found at:  Royals Home

Other information about Lakeshore Hockey Arena can be found at:  Arena Home

More photos of Lakeshore Hockey Arena can be found  Here