Kingston, Ontario- that piece of land where the mighty St. Lawrence meets Lake Ontario, is not parts unknown for Roaming The Rinks as we had made multiple stops in this town, including the Frontenacs old home, the Kingston Memorial Centre.  This trip included a stop along the waterfront to the almost new K-Rock Centre.  The modern arena opened in 2008 and bears the name of the powerful rock radio station that we generally tune in once we get as far as Watertown, New York.  This 5700 seat arena sits in the busy Eastern edge of downtown, only a short walk from Fort Henry of War of 1812 fame.  Despite its downtown location there seemed to be plenty of parking, including a $5 pay lot only a half block away.  The building features a stone facade on the box office side, and oddly looks completely different from the end nearest the water, which has a curved shape.  That side has a glass exterior and is curved windows, whereas the rest of the building is squared off in traditional manner.  Nonetheless, the exterior and look of the building clearly identify it as an arena.  The road in front of the box office area has been renamed "Tragically Hip Way" in honor of Kingston's own rockers who played the first concert at the new venue.  The exterior and feel of the building seem to fit into the neighborhood well, sitting only steps from military buildings used for over 200 years.  We purchased a $22 ticket for this Sunday matinee matchup against Niagara at the curbside box office window.

Once inside the K-Rock Centre it is clear that this is a state-of-the-art arena which is perfect for the OHL.  The main concourse features a very well stocked team store, as well as tributes to Kingston sports heroes of the past.  The support pillars on the lower concourse hallway also features banners recognizing all of the concert acts who have played at the K-Rock Centre.  This seemed a little out of place, but with a rock station having naming rights I am sure they had a large say in that.  There is even a K-Rock merchandise store on site where you can get apparel and items offered by the station.  The lower concourse does dead-end at one end of the building, therefore not allowing patrons to go all the way around the arena.  Up some stairs is the seating bowl, complete with its gray plastic seats and a wide upper concourse which does indeed circle the entire ice.  There are additional concessions on this concourse, and even a cloth napkin, fine dining restaurant area on one end of the concourse if that is your kind of thing.  Despite the physical concourse extending all the way around the arena the center ice section on one side is roped off for VIP Club seat holders, so you still can't actually walk all the way around unless you have a big-whig ticket.  The sight lines are good everywhere, although the seats on one end are situated about 20 feet back from the ice surface.  Still they offer a good view. There are luxury suites in a u-shape around the top of the arena, and the end devoid of the suites features retired number banners hanging from the rafters.  All in all the set up of the K-Rock Centre has modern arena comfort written all over it.

The game day experience at a Fronts game is focused on fun.  It is enjoyable watching the team skate out from the inflatable castle before the game, and there are plenty of interviews and intro videos shown on the very sharp center ice video board.  The fans are vocal and really into their team, unfortunately there were only 2000 or so fans on hand.  This was a very early season Sunday afternoon game though, although the Fronts aren't known for selling out too often.  The PA system is as clear as any I have ever heard.  Having an affiliation with a radio has a lot to do with that I am sure.  There were the usual between period contests, and lots of giveaways during stoppages, however here the roaming announcer did a great job, sounded knowledgeable, and she didn't seem over the top with yelling and carrying on.  The K-Rock Centre is certainly a stark contrast to the old Memorial Centre as that arena, although a great experience for lovers of old arenas and wooden seats, did not have many creature comforts.  The K-Rock Centre now allows the whole family to enjoy a game in comfort, with good sight lines and a fun overall atmosphere.  The Frontenacs fans left this game happy as well as they took a well earned 5-4 victory over the IceDogs.  The facility is worthy of hosting a Memorial Cup, and Kingston's history and other tourist attractions make it a possible candidate in the future.  The overall experience at the K-Rock Centre for a Frontenacs game is a great way to experience a high level of hockey in one of the most modern arenas in North America. 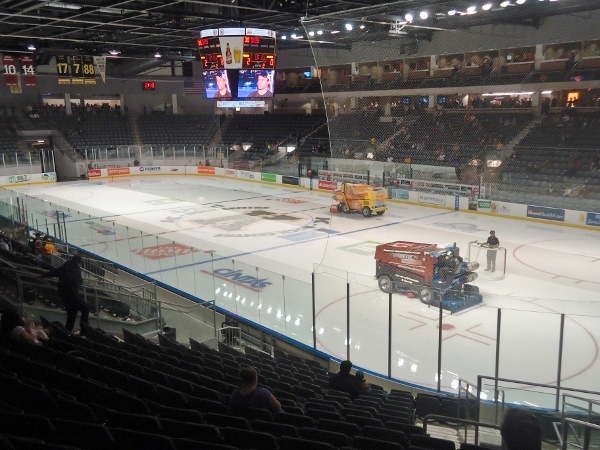 Other information about the Kingston Frontenacs can be found at:  Frontenacs Home

Other information about the K-Rock Centre can be found at:  Arena Home

More photos of the K-Rock Centre can be found  Here