The word classic is overused in today's culture.  It has become almost a meaningless 7 letters in the world of constant superlatives for everything that is "good" or "cool".  When talking about hockey arenas, and the overall atmosphere of attending a hockey game, the Aud in Kitchener could hardly be summed up with any other word.  Having the chance to see playoff action in this hallowed barn was simply an unbelievable experience.  The Aud was built in 1950, and sits in a park like setting along with the city's other sports facilities including football and baseball stadia, but hockey is clearly the main attraction here.  At one end is a stone facade and entrance which  is a bit weathered.  Parking lots surround the building, and most folks enter at the newer entryway which connects the main arena with the 2 other ice pads on site.  The Rangers draw very well, often selling out the nearly 6300 seats even during the regular season.  I grabbed my single ticket for $21.50 from the box office window which sits at the entryway of the lobby which connects the main arena to the other rinks.  I was glad to get a ticket and knew a fun night was in store.

Entry to the arena itself it through the older stone entrance at the top of the parking lot, or through a landing which sits atop a flight of stairs off of the lobby near the box office area.  Waiting outside on the small landing before the game they are already serving food through several vendors, and the lobby houses a huge collection of photos as it is the Kitchener sports hall of fame.  Pregame atmosphere has that big game feel to it as fans huddle outside the doors in mass, waiting to get inside the Aud and get their seats.  Once inside you are on a almost-wide-enough concourse which runs behind the seats, at a level between the upper and lower seating bowls.  The usual food vendors and beer garden sits along the concourse.  The are tributes to teams and players from Rangers history all throughout the concourse, including the names and numbers of past Ranger greats listed on just about every large metal rafter that runs along the top of the concourse.

Once you enter the seating area you realize you are in a special place.  The lower bowl circles the ice with gold seats.  Above the gold seats a larger area of red seats surrounds the ice, but in a more squarish profile, with no red seats atop the corners.  From anywhere in the building the view of the ice is awesome, and the size of the building makes this place feel as though every game is a major event.  There are numbered standing spots high atop the corners, and luxury suites above the reds seats on the sides and one end and a restaurant type area on the other.  Still with the modern amenities this place has the character of a 60 year old building, with red bricks being quite visible in the corners.  Make no mistake about either as the 6300 seats are shoehorned into the building and leg room is at a premium, and the weathered concrete block aisles between seats are steep and very narrow.  A modern video scoreboard is well used, and shots-on-goal clocks are in the corners.  The top couple rows on the sides are almost into the rafters, and make it hard to see the center ice score board, so there is a small but functional scoreboard atop the rafters facing the crowd on each side.  The arena just has such a classic feel to it that it reminds me of the old Boston Garden, only smaller.  Championship banners litter the rafters representing the history of the Rangers.   In fact one such banner is painted onto the railing below the luxury seating on one and and simply states " The Aud - Home of the Kitchener Rangers - A hockey tradition since 1963".  That about sums it up.  The arena is a great combination of an old building with a classic feel, coupled with modern trappings which make watching a game more enjoyable.  The team store called The Outpost is probably the most well stocked store I have ever seen in an arena, and is complete with a guy manning the embroidery station if you want to buy a jersey and get a nameplate and number sewn on while you wait.  That right there is cool!  Oh, and the fans also like their 50-50 drawings, as the winner on this night took home over $5000.

The game day experience here is nearly unparallelled as the folks in Kitchener love their hockey.  The presentation is not overly full of advertisements, and mixed in with the arena rock anthems you can still hear quite a bit of organ music, adding to the Aud's charm.  The fans here know their hockey, and seem to almost always have the appropriate response for what is happening on the ice.  They are loud, but know when to cheer, even for little things like a blocked shot or a nice clearing attempt on the PK.  They also are quite adept at the synchronized clapping type cheers.  Playing in front of a packed house at the Aud must give a huge energy boost to the Rangers, and is surely intimidating for opponents.  A wild third period and a 6-4 Rangers win over the Plymouth Whalers had the Kitchener faithful celebrating on this night.  It was a playoff atmosphere for sure, although I have a feeling that a regular season game at the Aud would have more intensity that your average OHL game in a place like Belleville.  The arena is not perfect however as with a large crowd the concourse is at a near gridlock between periods, and the seats are narrow and uncomfortable and offer almost no legroom, even for a short guy like me.  These are minor inconveniences however in order to be able to enjoy the game we all love in a place like this where it was meant to be played.  Seeing hockey played with organ music and 6300 cheering fans is near nirvana.  Maybe I just caught the Aud on a magical night, or maybe it is like this even for an early season game in late September, but this place seems like the quintessential example of what a hockey arena is supposed to be.  Make sure you make a trip to Kitchener yourself. 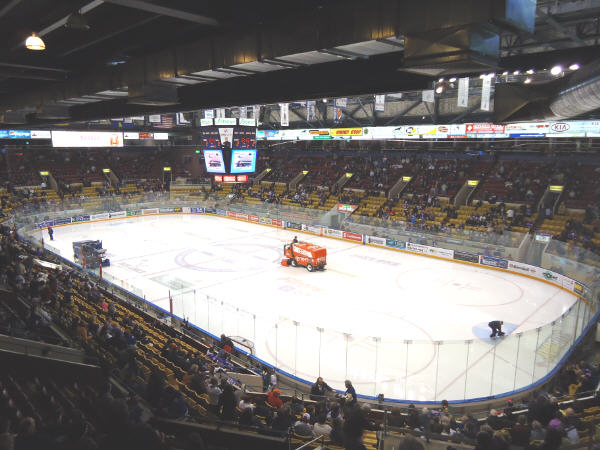 Other information about the Kitchener Rangers is available at:  Rangers Home

Other information about the Kitchener Memorial Auditorium is available at:  Aud Home

More Photos of the Kitchener Memorial Auditorium are available  Here