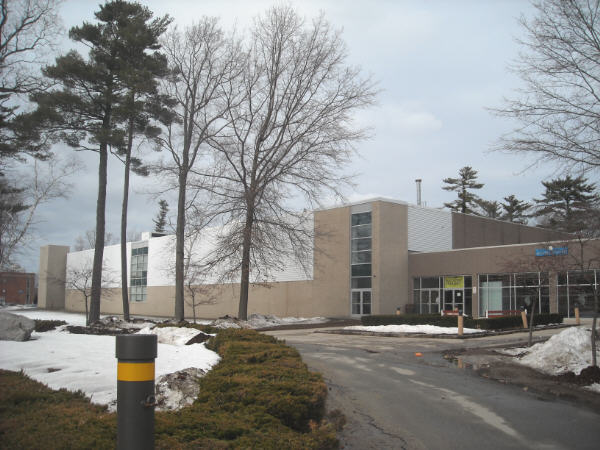 Merrimack College sports a Division 1 Hockey East program despite being a school with a small enrollment and relatively unheralded sports programs.  I had attended a couple games here in the early 90's when I used to live in the Boston area, and even attended my high school hockey state playoffs here in 1988 or 1989 (Go A.C.!).  The Lawler Arena is a neat little rink which doesn't have a whole lot of frills, but gets the job done.  It sits on campus, and is part of the Volpe Athletic Complex which also houses the basketball gym and other athletic facilities.  You can park for free on campus on gamenights, although they do advertise "preferred parking" for 10 bucks in the small lot right next to the rink.   Built in 1972, this place has the look and feel of many other multi-purpose athletic buildings of its time.  You enter into the main lobby and buy your tickets at the box office, which in this case is actually a box which serves as an office.  There is a lobby which  is shared with the gym.  There is a table selling programs and the like, and a small food concession stand as well.

To enter the main arena you open up a set of doors, and the rink is right there.  You immediately notice that the ceiling is very low, as there is not room for a center ice score clock.  There also is not really a concourse as you simply walk in front of the stands along the boards to get to your seat.  The seating consists of bleachers on each side.  The arena capacity is listed at 3000, although it looks smaller.  There is standing room along the glass directly inside the doors from the lobby. The team benches are on opposite sides, and there are old school score clocks on the walls behind each goal.  Since  my last visit over 15 years ago they have changed the seating configuration on the side behind the Merrimack bench a little.  There is a new section of blue chairback seats as a result of recent renovations, and these appear to be for season ticket holders.  Also on the far end of the same side the bleachers don't go all the way to the top like they do on the rest of the arena.  There is also a wall of luxury suites along the top, which are covered with glass and appear to be accessible from a different part of the building.  There are heaters blowing from the ducts which run across the ceiling, and they make the building toasty, almost too toasty.  I was a little surprised with the $15 ticket price, although this team does have to compete with the rest of the schools in Hockey East which have bigger arenas.  The sight lines are not all that great as the seating, which has 12 rows on 1 side and 14 rows on the other, is not very steeply pitched.   With a good crowd at this game it was hard to see over the back of the head of the person in front of you.   We were sitting in the second row from the top, and it felt as if we could touch the ceiling.  I do give them credit for trying to utilize as much space as possible to have seating on the sides of the rink.

The atmosphere is O.K., but not what you would expect from an arena on campus.  Perhaps the fact that the game was scoreless until the final 10 minutes may have led to the quiet crowd.  When I saw a pep band in the far corner of the arena I was happy as that usually means the crowd gets pumped up and everyone is in for a fun time.  The Merrimack pep band however hardly played at all, and when they did they seemed rather unorganized, and haphazard.  The crowd finally came alive when Merrimack scored on a 5 on 3 late in the game, and then added a second goal on the same power play, taking the win over Brown 2-0.  I was glad to get back to this arena to re-experience it and document it for this website.  It may not be up to par with many Division 1 rinks, but it gives the students a chance to cheer for the perennial underdog Warriors, and gives locals in this area about 20 miles north of Boston a chance to see high quality hockey without tackling the traffic and hassle of the city. 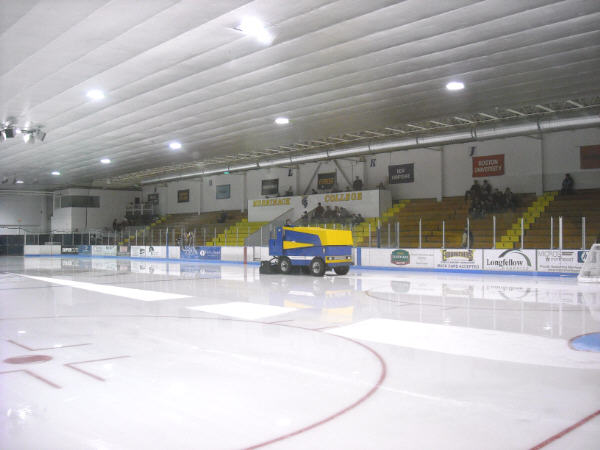 Other information about the Merrimack Warriors is available at:  Warriors hockey home

Other information about J. Thom Lawler Arena is available at:  Arena home